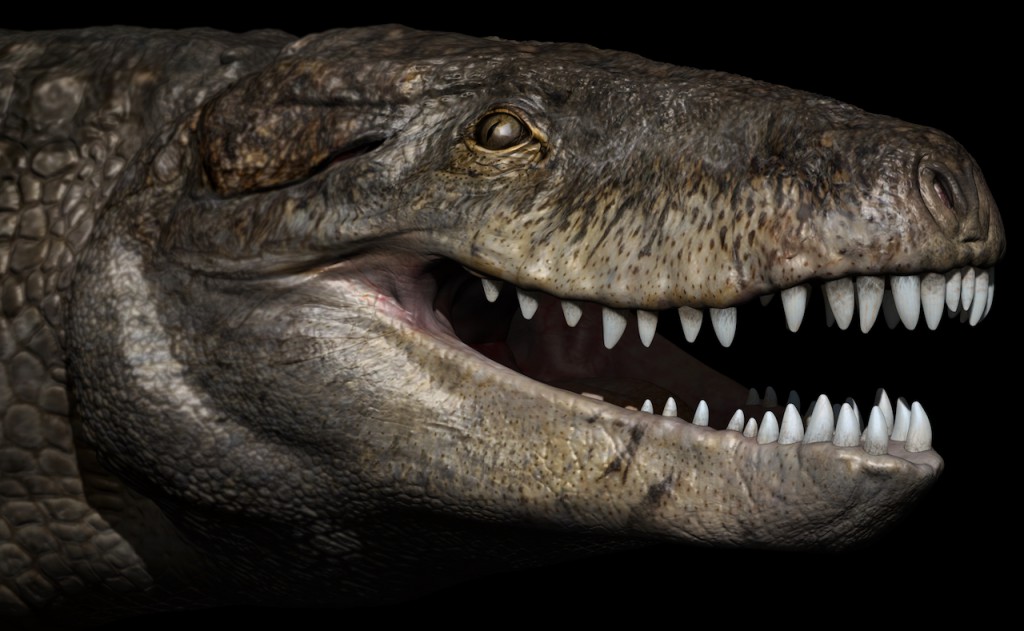 Out of Madagascar comes a megapredator the stuff of nightmares: a massive croc-like carnivore that walked erect and had a mouthful of steak knife teeth more like those of T. rex than modern crocodiles. While this might sound like some crazy hybrid creature dreamed up for the next Jurassic Park sequel, this animal was real, and finding new pieces of it sheds light on a mysterious “ghost lineage.”

About 167 million years ago, what’s now the northwest corner of the African island of Madagascar was the realm of Razanandrongobe sakalavae, an enormous predator and distant kin of today’s crocodilians. And sure, what catches your eye at first glance are those teeth — massive, serrated chompers similar to the size and shape of those you’d find on T. rex several million years later.

Look past this ancient archosaur’s size and toothy smile, however, and you’ll find what’s really scientifically significant about the fossil: it’s the oldest known member of a lineage that has stumped many a paleontologist.

Not a Lot of Notosuchians In The Jurassic

Paleontologists first found fragments of the megapredator they nicknamed Razana — does anyone else think of this immediately? — more than a decade ago. But the pieces were too limited to determine much about the animal, other than the fact that it was very big and very toothy.

Recently, combing through museum collections, researchers found additional fragments they believe were initially collected from rocks of the same age and near the earlier find. Analyzing the mineral composition of all the disparate fossils appeared to confirm they’re from the same general area and time, leading the team to declare all of the pieces belonged to this guy: 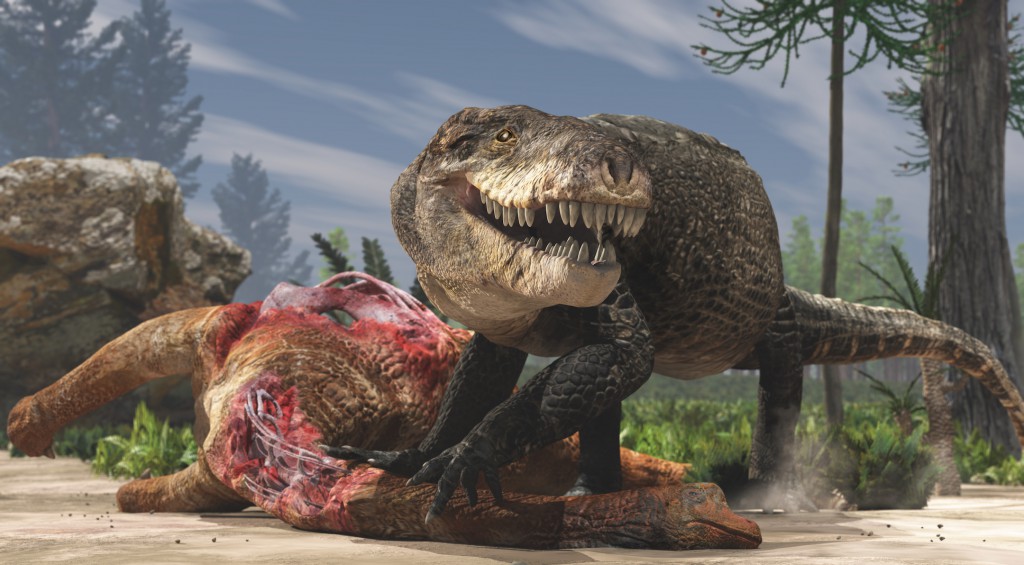 Unlike the sprawled posture of modern crocodilians, Razana’s limbs were more erect, say the researchers. Not erect, at least not anymore: the sauropod at Razana’s feet. Snackasaurus, I believe. (Credit Fabio Manucci)

So, yes, the collection of random Razana bits lacks the kind of rock-solid (arr arr arr) geological context that gets paleontologists really revved up, but let’s accept Team Razana’s hypothesis that the pieces all do belong to the same species. Together, the fragments had enough information for the team to, at last, confidently describe Razana as a crocodylomorph and, more specifically, a notosuchian.

That makes Razana by far the oldest known notosuchian — a line of terrestrial crocodile kin with distinctive deep skulls. We don’t see notosuchians in the fossil record until well into the Cretaceaous, more than 40 million years after this meaty megapredator.

Razana’s size also makes it one of the largest notosuchians, which were generally much smaller.

Notosuchians, by their Cretaceous heyday beginning around 110 million years ago, were already a very diverse bunch. Different notosuchian lines had each evolved highly specialized traits; some had body armor, for example, others had flattened snouts that looked like duckbills.

For decades, paleontologists have been searching for the more primitive, less highly-adapted notosuchians that would have predated the Cretaceous critters. Researchers knew the animals had existed: you don’t get super-specialized, also known as highly derived, species out of thin air. Something — actually, a great many things, each more primitive than the next as you marched back in time — had to pre-date the later notosuchians. Because these earlier animals weren’t turning up in the fossil record, they were considered a ghost lineage.

Enter Razana. Turning up this beast from Middle Jurassic rocks tells researchers a couple important things. First, to find so early a notosuchian on the prowl in Africa suggests that the entire lineage evolved in Gondwana, the great southern supercontinent that began breaking up shortly before Razana’s time (geologically speaking).

Second, Razana’s school bus size suggests that big bodies — which usually evolve late in a lineage — can and do show up very early on.

Just having a notosuchian of this age is also exciting, because it’s starting to fill in that elusive ghost lineage.

Fans of theropods, the mostly bipedal and generally carnivorous dinosaur lineage, may wonder why the paleontologists who analyzed Razana knew it was croc kin rather than a dinosaur.

Although Razana’s remains are fragmentary, the scientists have identified numerous anatomical features that place the animal in with the crocodylomorphs rather than in Dinosauria, including sutured mandibles and the position of the nostrils. (For more details on the distinctively not-dinosaur traits, check out today’s open-access paper. The link is at the bottom of this post. I suggest you read the whole thing but if you want to skip to the not-a-dinosaur section, it starts on p.14.) 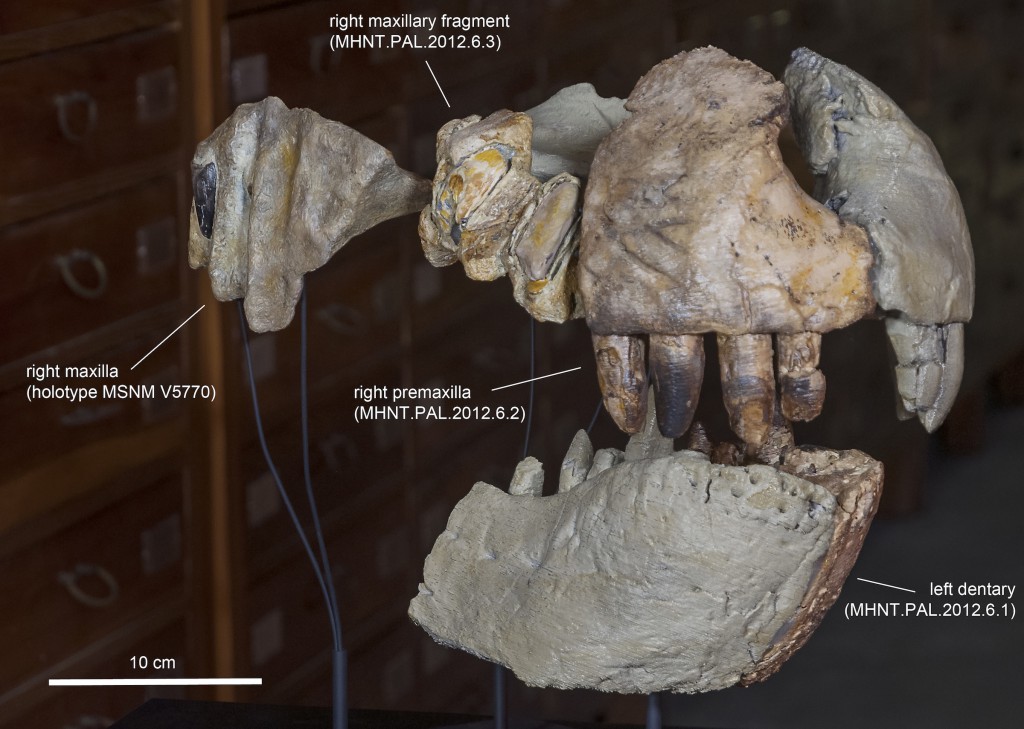 A close-up of Razana’s snout reveals its large, serrated teeth. The image is a 3-D printed reconstruction of the animal’s jaws made by FabLab Milan and based on CT scans of the original fossils. (Credit Giovanni Bindellini)

What Razana does have in common with certain theropods are those teeth: serrated and curved more like that of a tyrannosaur than modern crocs. And they were big, as well, some of the teeth measuring six inches in length.

In CT scans, replacement teeth can be seen waiting in the wings — or at least in the root of older, already exposed teeth. And Razana needed those backups. Based on wear patterns of the teeth recovered, the researchers believe the animal regularly chomped on bones and tendons in addition to softer flesh. This and other evidence suggest that Razana was both a megapredator and, when the option was there, a megascavenger.

Waste not, want not. 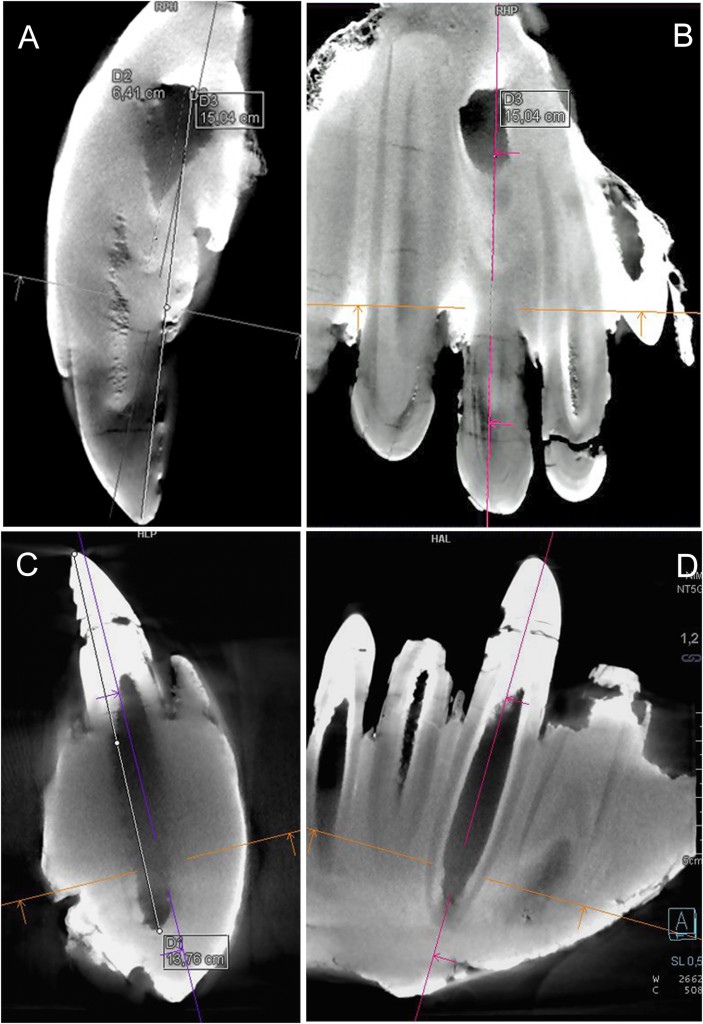 CT scans of Razana’s jaws and teeth offered insights into the process of tooth replacement. The largest premaxillary tooth (A,B) is about 6 inches long; a replacement tooth measuring about 2.5 inches can be seen enclosed by its root. Another tooth (C,D) measured about 5.5 inches. (Credit Cristiano Dal Sasso)

While Razana is the oldest notosuchian in the fossil record by more than 42 million years, it’s not the Mother Of All Notosuchians by far.

Paleontologists estimate the chronology for a lineage’s evolution based on differences between known and dated species and the time it would take for those differences to arise. Their models currently put the dawn of Notosuchia in the Early Jurassic, perhaps 20 or 30 million years before Razana.

So, while the newly described material fleshes out Razana’s story, it’s by no means the end of the hunt. The models tell us more members of the ghost lineage should be lurking out there, in older rocks, waiting to be found. 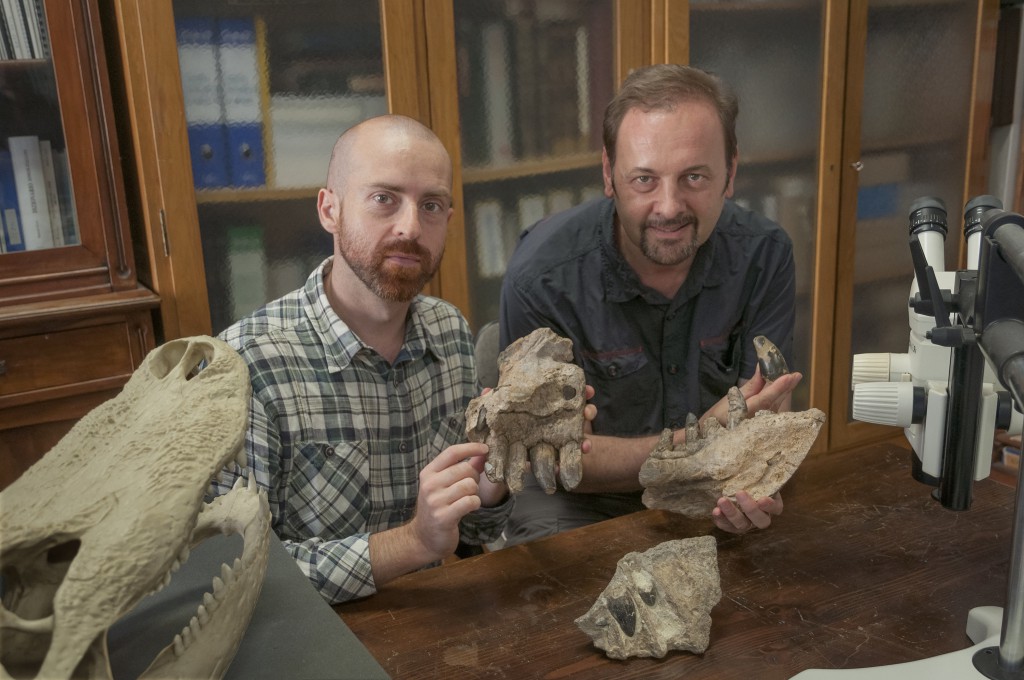 Paleontologists Simone Maganuco (left) and Cristiano Dal Sasso (right) show off some of the skull bones of Razana, their recent and terrifying find. Note the size difference between Razana’s chompers and those of the skull of the modern crocodilian at lower left. (Credit Giovanni Bindellini)