Author Vishay SinghPosted on May 25, 2017May 25, 2017Categories Discover Magazine 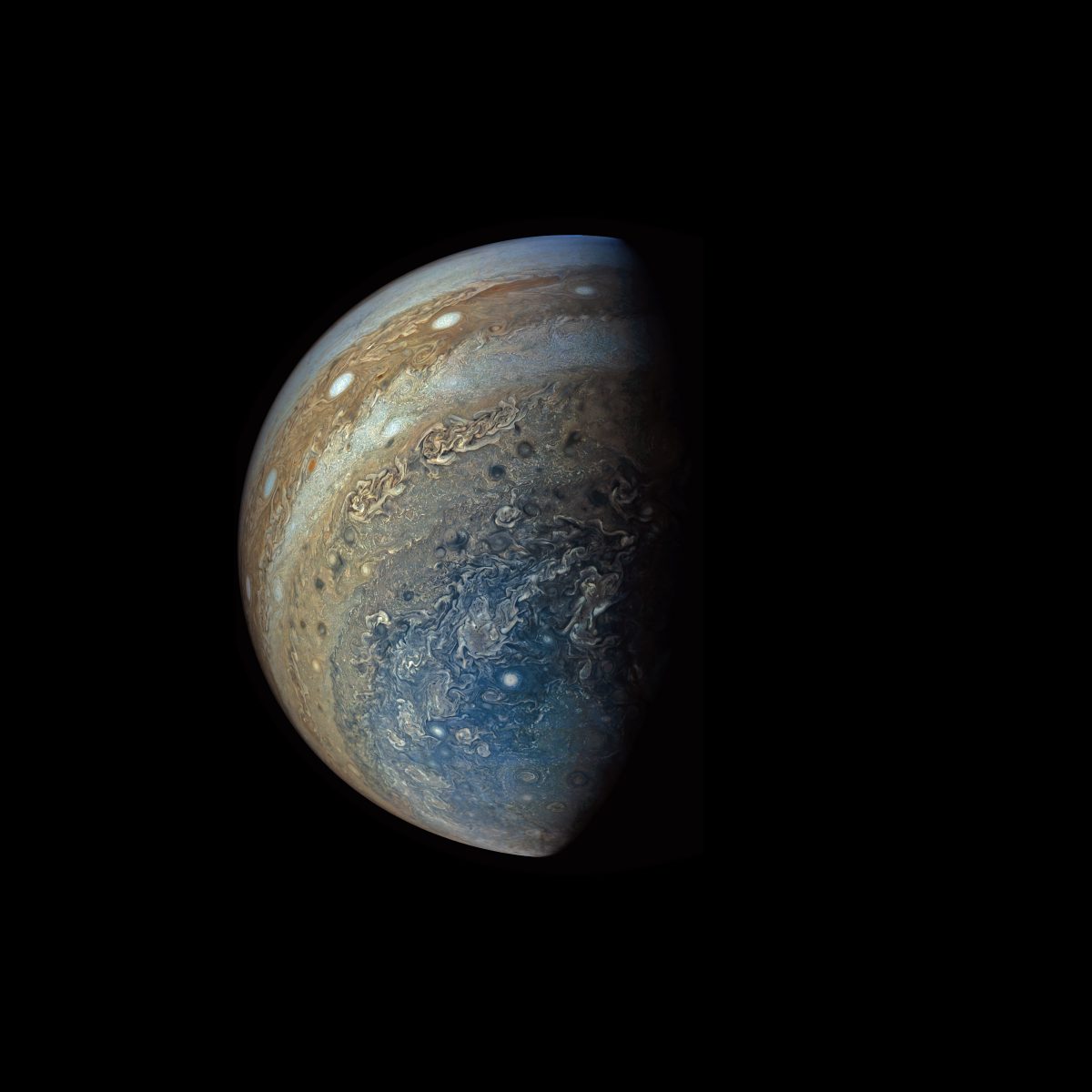 The first results from Juno’s brush with Jupiter reveal swarms of cyclones, massive ammonia plumes and complex interactions between a turbulent magnetic field and powerful streams of electrons. The findings are published today in Science and Geophysical Research Letters.

The Juno team is still sifting through the massive piles of data the probe is sending back from the gas giant. Since arriving last year, the probe has  begun to study the composition and internal structure of Jupiter. We’re also learning more more about its super powerful magnetic field, information that will yield insights into how our solar system formed and how gas giants around other stars may behave.

Juno is armed with an array of instruments that allow researchers to gather information from both the outer layers and deep below the clouds. Visible and infrared cameras capture outermost details, while magnetometers and a microwave radiometer (along with detectors tuned for various types of energetic particles) gather information on the flurry of electromagnetic activity infusing the planet. Also on board is equipment to measure the world’s gravitational field, which could offer important clues about Jupiter’s interior composition.

The first and most visually striking data Juno returned were images of the north and south poles, both spotted with dozens of cyclones, some reaching almost 900 miles in diameter. Even more strikingly, microwave readings at the equator detected a huge plume of hot ammonia gas emanating from deep within the planet. This column seems to bring ammonia to the outer layers, where it crystallizes into ice particles and rains down at higher latitudes near the poles. The feature is in some ways similar to Hadley cells on Earth, which fuel hurricanes and the jet stream while distributing moisture throughout the tropics.  The plume stems surprised researchers, who had assumed that the ammonia clouds were relatively uniform all the down, and could help illuminate how weather systems on the planet form. 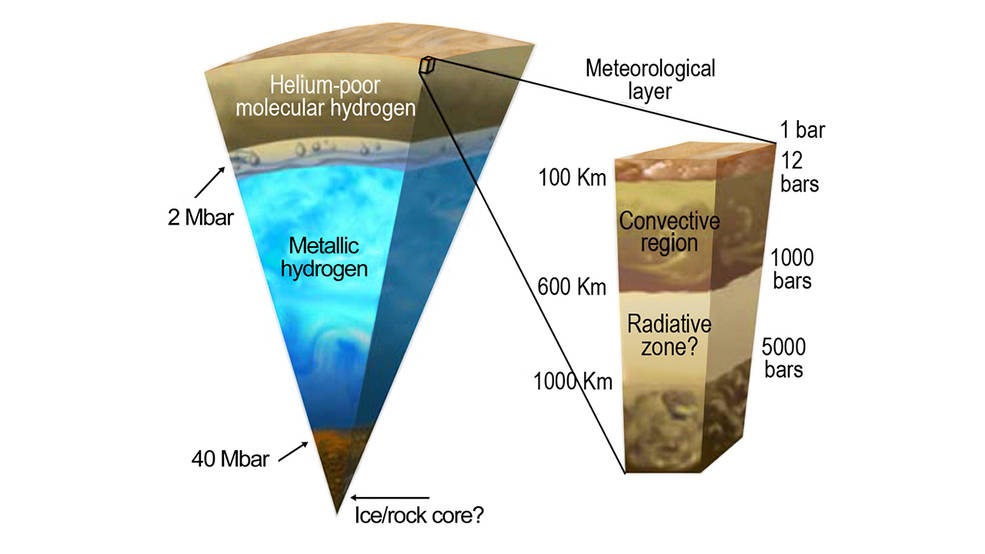 An illustration of Jupiter’s interior. A possible inner “rock” core is shown, surrounded by a metallic hydrogen envelope (shown in blue) and outer envelope of molecular hydrogen (shown in brown), all hidden beneath the visible cloud deck. Juno’s gravity field data will reveal new clues about Jupiter’s core. (Credit: NASA/JPL-Caltech/SwRI)

Researchers also studied the planet’s immense magnetic field and found that close to the planet it was much stronger than expected, clocking in at 7.766 Gauss — about ten times stronger than Earth’s. Their measurements also found lots of magnetic complexity near Jupiter’s outermost layers, which supports the hypothesis that the world’s magnetic field is being driven by the swirling liquid hydrogen layer beneath the clouds. A full mapping of the magnetic field awaits data from further Juno orbits.

“Juno is giving us a view of the magnetic field close to Jupiter that we’ve never had before,” said Jack Connerney, Juno’s deputy principal investigator. “Already, we see that the magnetic field looks lumpy: It is stronger in some places and weaker in others. This uneven distribution suggests that the field might be generated by dynamo action closer to the surface, above the layer of metallic hydrogen. Every flyby we execute gets us closer to determining where and how Jupiter’s dynamo works.”

Understanding its magnetic field will add another piece to the puzzle of Jupiter’s interior. While planetary scientists assume it to be mostly hydrogen, the true composition, density and structure remain unknown. Scientists assume that the crushing pressures create a large layer of metallic hydrogen in the planet’s interior with a rocky core beneath, but definitive evidence is still lacking. Juno is also taking gravitational measurements as it orbits, which should give us more information about the interior as additional data becomes available.

In addition to looking below Jupiter’s clouds, the researchers wanted to see what happens above them, where charged particles from both the sun and within Jupiter interact with its magnetic field, creating huge auroras. Juno first encountered the shroud of particles last summer when it passed through the bow shock, a sort of shock wave created when Jupiter’s magnetic field shunts particles from the solar wind aside. The bow shock seems to have been moving outward as Juno passed through it, the researchers say.

As it moved closer, Juno also measured the density of the particles it encountered on its trip around Jupiter, and took readings of the streams of aurora-generating electrons flowing toward the planet as the probe flew over its poles. These particles moved in different ways than the streams of electrons that create auroras on Earth, revealing that Jupiter’s magnetic field must behave in ways that ours does not. By studying how the particles behave in the grip of the gas giant’s magnetic field lines, researchers can better map the field itself — providing its own clues about what’s going on beneath Jupiter’s clouds.

The probe itself has suffered little damage as a result of the planet’s intense radiation belts and repeated dives near the surface, the researchers say, indicating that the “suit of armor” protecting the spacecraft is holding. This is good news for the remainder of the mission, according to Scott Bolton, Juno’s principal investigator.

“We need the rest of our mission to really figure out how Jupiter works,” Bolton said. “We’ve also confirmed that Juno is the right tool to do this … We’re actually going to win over this beast and learn how it works.”

Juno will continue to orbit Jupiter until 2018, completing a total of 37 orbits, each time building a more complete picture of the planet. While these initial results are promising, much more is still to come.