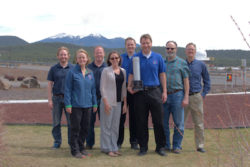 You may have noticed some strange weather recently where you live. For example, in February, it reached 100o in Mangum, Oklahoma when 56o is the average. For the first time ever, temperatures in Antartica rose to the high 60s. And when was the last time you saw a headline reading Hawaii Has Had More Snow than Chicago or Denver in 2017? Some may link these strange events to a changing climate, and although climate influences weather patterns, it’s important to make a distinction between the two to fully understand the impacts of global climate change.

Neil Degrasse Tyson communicates this distinction with an analogy of a man walking his dog, and another common analogy states: “weather influences what clothes you wear on a given day, while the climate where you live influences the entire wardrobe you buy.”

Indeed, understanding weather patterns gives us insights into the impacts of climate change, and there are many ways you can contribute to scientists’ understanding of both. One way is through participation in the citizen science project CoCoRaHS (the Community Collaborative Rain, Hail, and Snow Network), where you can volunteer to measure and map precipitation.

CoCoRaHS’s 20,000+ active observers compile precipitation data for many end users, including the National Weather Service, as well as insurance adjusters, ranchers and farmers, outdoor and recreation enthusiasts, and teachers, on a timely basis and increase the density of precipitation data available throughout the country.

Henry Reges, the project’s national coordinator, describes it in this way. “CoCoRaHS observers provide important precipitation information regardless of how close they are in proximity.  Rainfall from convective storms can vary from block to block in some neighborhoods.  The more observers we have in a community, the clearer the picture of how much rain or snow fell where.  It’s just like the number of pixels in a photo, the more pixels, the better the image.”

There is no better time than March for you to begin your participation in this great project. CoCoRaHS March Madness is a friendly annual recruiting competition to see how many new volunteer observers each state can recruit during the month of March. More volunteers means more data, of course, and “the better the image.” During March, CoCoRaHS will post a daily tally of results by state on the CoCoRaHS March Madness Page with the final results posted on April 1st. The CoCoRaHS Cup will be passed on in the Traditional Count category to the state with the most new volunteers recruited in March 2017.

A second CoCoRaHS Cup will be passed along from last year’s winner, Delaware, in the Population Weighted category to the state that recruits the greatest number of new observers per one million of its total population. This approach gives states with a smaller population an equal chance of winning this honor. The winning states will get to hold onto and display one of the two “CoCoRaHS Cup” trophies until March 2018.

To join the project, you will need to complete a training program either online or in-person, then use a rain gauge to measure rain, snow, and/or ice that falls at your home. You’ll submit the data you collect to the project website.