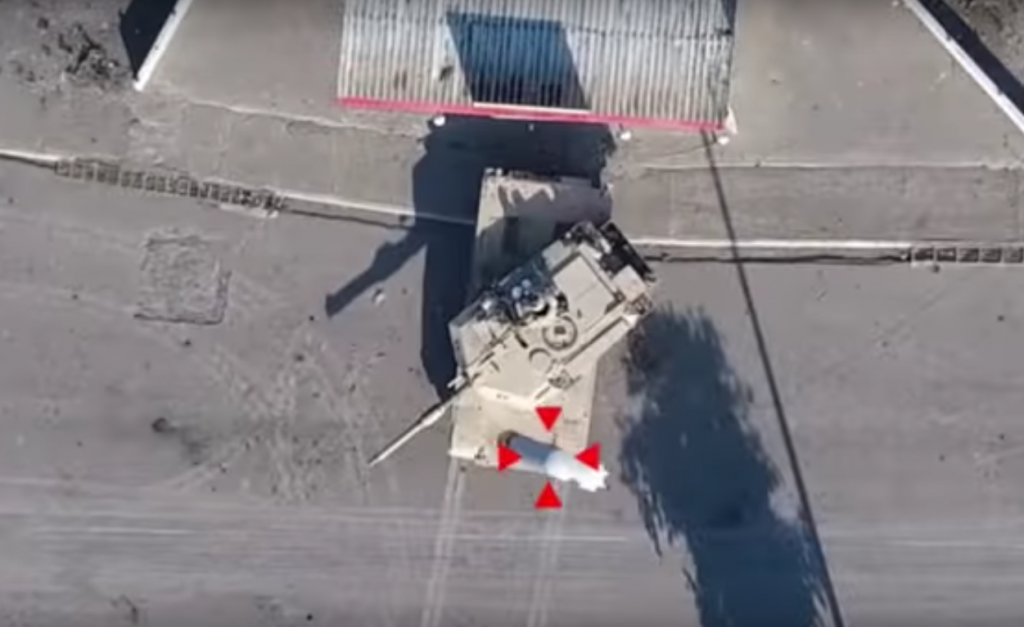 Islamic State’s weaponization of consumer drones that anyone can buy off the shelf or on Amazon has reached new heights during the battle for Mosul that has been raging since October 2016. A recent propaganda video released by Islamic State showed off the militant group’s increased confidence in using small quadcopter drones to hover in place and drop small bombs on Iraqi military forces. One snippet of the video even shows a drone’s bomb striking a U.S.-manufactured Abrams tank in use by the Iraqi military.

Iraqi military forces backed by the U.S. have faced a growing threat from small swarms of quadcopter drones as they battle to take back the city of Mosul from entrenched Islamic State fighters. The latter have used relatively cheap off-the-shelf drones to scout the battlefield from above, record propaganda videos of their suicide vehicle bombs, and even as improvised flying bombs. But the recent video obtained by the Middle East Media Research Institute from an Islamic State online channel provides a string of footage that shows drones dropping bombs on Iraqi soldiers and the Abrams tank.

Warning: The video shows graphic battlefield footage of a bomb exploding near a tank commander.

Steven Stalinsky, executive director of the Middle East Media Research Institute, told The Washington Times that the video appeared to show the first “offensive drone able to carry bombs, albeit small ones.” He added that all jihadi groups have been using and studying drone technology that they buy online and modify for their own needs.

Members of the Funker530 website popular among military veterans commented on certain aspects of the video that appeared to be crudely edited (such as the supposed targeting system of the bombs). They also pointed to the crude nature of the “bombs” being dropped by the drone: Primarily grenades or rocket warheads turned into improvised bombs. But most agreed that the basic video footage appeared to be authentic.

But the Iraqi military has not been entirely at the mercy of Islamic State’s weaponized drone swarms. Sylvia mentioned that U.S. troops had helped the Iraqi forces take down at least a dozen Islamic State drones, according to The Military Times. Iraqi federal police had also captured a site used by Islamic State to launch and recover their drones.

This growing trend of weaponized drones stems from the growing popularity and availability of consumer drones. Quadcopter drones costing just a few hundred dollars can be purchased by anyone and used as is to provide battlefield reconnaissance or capture propaganda videos with their commercial cameras. Or, as Islamic State has shown, they can be turned into crude but potentially lethal weapons.

These weaponized drones remain a far cry from the much more expensive and larger drones used by the U.S. military. But their inexpensiveness and widespread availability mean that any militant group can gain new battlefield capabilities that crudely mimic the traditional military assets of the U.S. and other modern military forces, according to a June 2016 report released by the Center for a New American Security.

That “Game of Drones” report described the results of a two-day war game held among experts at the National Defense University in Washington, D.C. in October 2015. That war game held more than a year ago predicted that “non-state actors” such as Islamic State could use small commercial drones armed with explosives “to launch attacks on civilian, government, and military targets from standoff distances” and “to capture and transmit propagandist video footage of attacks and messages from central leadership.”

The war game predicting the impacts of drone proliferation was held not much more than a year ago. Since that time, the battle for Mosul in Iraq and other ongoing conflicts in countries such as Ukraine have shown that weaponized drones are here to stay. Both modern military forces and law enforcement will have to be prepared to deal with the growing swarm.