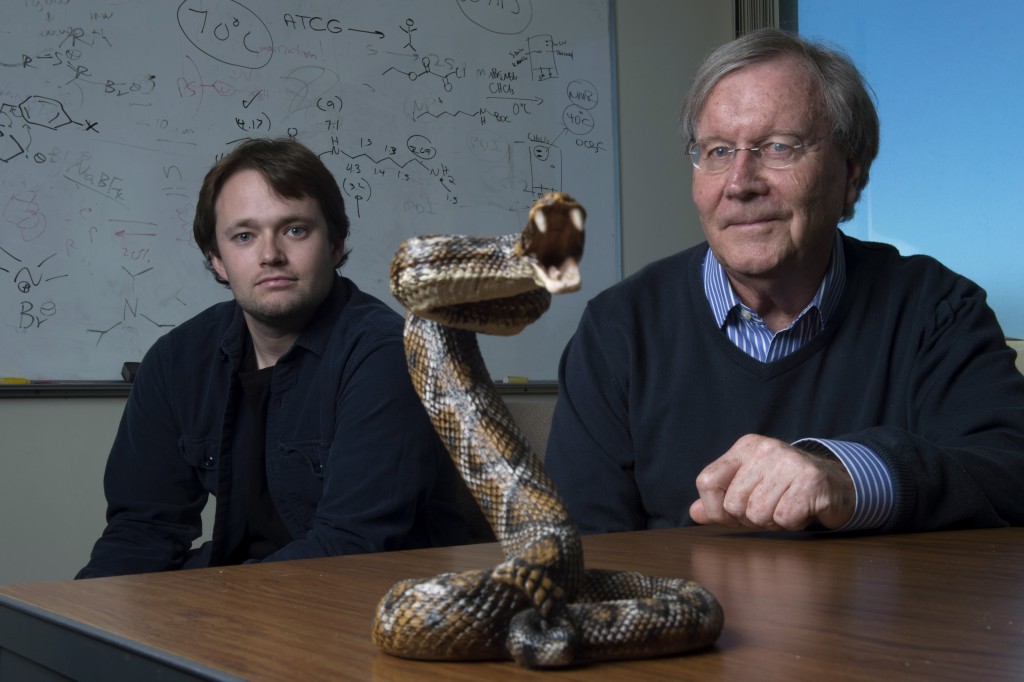 Living in countries like the U.S., Australia, and the U.K., it can be all too easy to forget that snakebites are a serious and neglected global medical problem. It’s estimated that upwards of 4.5 million people are envenomated by snakes every year; about half of them suffer serious injuries including loss of limbs, and more than 100,000 die from such bites.

Much of this morbidity and mortality could be prevented if there faster, easier access to the therapeutics that target and inactivate snake venom toxins could be established. But effective antivenoms are difficult to produce, expensive, and usually require storage and handling measures such as refrigeration that simply aren’t possible in the rural, remote areas where venomous snakes take their toll. Seeking to solve many of the issues, a new wave of researchers have begun the search for alternatives, hoping to find stable, cheap, and effective broad-spectrum antidotes to snake venom toxins. One such group at the University of California Irvine recently announced a promising new candidate: a nanogel that can neutralize one of the most dangerous families of protein toxins found in snake venoms.

In a press release published last week, the scientific team—led by chemistry professor Ken Shea—drew attention to their most recent paper unveiling the new possible therapeutic, which was published in the Journal of the American Chemical Society in December with Shea’s Ph.D. student, Jeffrey O’Brien, as lead author. The team dubbed the polymer nanogel material, which consists of readily available acrylamide derivates, a “nanodote.”

To find the right cocktail of nanogel components, the researchers pitted chemical formulations against one of the most toxic protein families found in snake venoms: phospholipase A2s, or PLA2s for short. PLA2s are enzymes which generally cut phospholipids (the fatty molecules which make up cellular membranes), and are essential for the daily functioning of our bodies. But through accelerated evolution, snakes have transformed these helpful enzymes into potent toxins with a wide diversity of sinister effects. Because of their abundance in the venoms of the three major venomous families of snakes, PLA2s are a natural target for any hopeful broad-spectrum snakebite treatment.

When the UCI researchers tested potential nanogel formulations against a suite of snake venom PLA2s, they found one that was able to sequester and neutralize the toxins from multiple snakes, preventing the toxins from killing human red blood cells (for you chemistry nerds: the nanogel chosen consists of 20% acrylic acid, 40% N-phenylacrylamide, 38% N-isopropylacrylamide, and 2% N,N′-methylenebis(acrylamide)). They then further tweaked the relative amounts of the four constituents to also inhibit bee venom’s main PLA2, melittin, resulting in a formula able to protect blood cells in concentrations as low as 63 μg/mL. Once optimized, they also tested the new formula for safety against a cultured human cell line, finding no evidence of cytotoxicity.

Then, it was time to put their nanodote to a much stiffer test: could it selectively inhibit snake venom PLA2s in human serum? After all, as soon as venom enters the body, it is diluted into the blood stream, so any potential treatment for snakebites has to be able to selectively target toxins, leaving the rest of the proteins in the blood alone. So, the researchers added the nanodote to human serum and looked to see if it bound serum proteins. Good news: it didn’t. They then added snake venom PLA2 from the Mozambique spitting cobra (Naja mossambica). The nanodote did bind those toxins, all the while leaving the human serum proteins alone.

“Current anti-venom is very specific to certain snake types. Ours seems to show broad-spectrum ability to stop cell destruction across species on many continents, and that is quite a big deal,” said O’Brien in the press release. But most importantly, “our treatment costs pennies on the dollar and, unlike the current one, requires no refrigeration.”

But while the results presented so far are promising, much more research is needed into how well the nanodote works in living creatures. Preventing red blood cell lysis from venom PLA2s in a laboratory setting is a great start, but it’s the bare minimum for proof of concept. The researchers need to demonstrate that the gel can effectively work against a diversity of venom toxins and in living, envenomated animals before even considering it a possible therapeutic for humans. And as anyone involved in drug development will tell you, there’s a big difference between a compound that works in a test tube and one that is effective, cheap enough to produce, and safe for use in people.

Of course, it’ll cost a pretty penny to move the nanodote from the lab bench to clinical trials and eventually to market. It costs an average of $2.6 billion dollars (and more than a decade of work!) to turn a promising compound into a pharmaceutical. So it’s not surprising that the researchers specifically make note of their hunt for private and public funding to continue research and development in the press release. “We have more work to do, and this is why we’re seeking a fairly significant infusion of resources,” senior author Ken Shea stated. It remains to be seen whether the lab will find those resources, and if they do, whether the nanodote can live up to the high hopes of the research team (as with all potential revolutionary treatments, it’s important to keep mind that only about half of reported medical breakthroughs actually hold up to further scrutiny). On behalf of the millions suffering from snakebites worldwide, let’s keep our fingers crossed.