Iran&#039;s Wolf Wall, Second-longest in the World, is Still Shrouded in Mystery 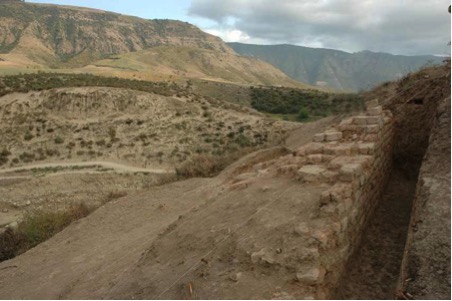 A section of the Gorgan Wall in the hills. (Credit: Arman Ershadi)

Golestan Province in Northern Iran is a unique landscape. Sandwiched between the temperate forests of the Alborz Mountains and the Caspian Sea, a narrow corridor connects Persia with the desert steppes of Central Asia. The passage measures 120 miles across from sea to mountain, and itâ€™s made of fertile rolling plains rising to windswept hills. The ancient name for this place was Gorgan (Ú¯Ø±Ú¯Ø§Ù†), meaning â€œland of wolvesâ€�, and wild wolves can still be found here, along with roe deer and bounding goitered gazelles.

For centuries, Golestan lay at the northern border of one of the worldâ€™s first superpowers: the Sassanian Empire. For 400 years, from their ascension in the 3rd century until they fell to Muslim conquerors around the year 600, the Sassanians ruled a vast stretch of the ancient Near East from their capital in Ctesiphon, just south of Baghdad. While the Western Roman Empire struggled in Europe, the Sassanians brought a golden age to the region now covered by Iran, Iraq, Syria and Turkey.

Here in Golestan, the scope of this empireâ€™s ambition left its mark on the landscape in a remarkable way. Across the plain stretches a mighty border wall, surpassed in size and scale only by the Great Wall of China. Itâ€™s known as the Wall of Gorgan, and unlike its Chinese counterpart, much of its construction remains an unsolved mystery to this day. 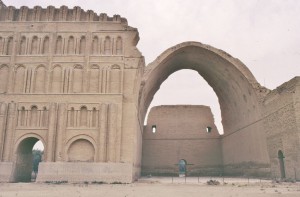 The arch of the Taq Kasra in Ctesiphon, Iraq. This was the main palace of the Sassanian capital. (Credit: Karl Oppolzer/Wikimedia Commons)

Powerful as it was, the Sassanian Empire also had formidable enemies. Chief among these were the vast horse-borne armies of the Huns, who regularly menaced their northern borders. And the most dangerous were the Hephthalites, the so-called â€œWhite Hunsâ€�. They left no written records behind, so who they were, what language they spoke and where they came from is a mystery. We do know, though, that their swift armies routinely made forays out of the harsh desert lands deep into the Sassanian Empire. The flat, fertile Gorgan region was the main corridor through which they mounted their attacks.

To counter this threat, the Sassanians undertook an engineering project of immense ambition beginning in the 5th century. They began to construct a wall that would span the whole length of the Gorgan lowlands, a sinuous barrier of mud bricks that would ultimately stretch farther than the combined length of Hadrianâ€™s Wall and its more northern cousin, the Antonine Wall. For 1,000 years until the extension of the Great Wall of China under the Ming Dynasty, the Gorgan Wall was the longest wall in the world. 121 miles of it have been unearthed, and it follows the line of division between the rich plains and the hardy desert almost exactly. 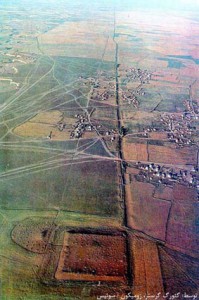 An aerial photograph showing the line of the Gorgan Wall still clearly visible in the landscape. (Credit: Arman Ershadi)

Archaeologist Warwick Ball has called the Wall of Gorgan â€œamongst the most ambitious and sophisticated frontier walls ever builtâ€�. Thatâ€™s especially high praise given that the wall is made solely from mud. With no trees or stone available on the Gorgan plain, the only building material was dirt from the river basin itself. The 5th-century Sassanian engineers attacked this problem with characteristic ingenuity, effectively creating an immense mobile brick-making industry to produce the millions of fired mud bricks that make up the wall. Along its whole length, archaeologists have found the remains of temporary kilns, each designed to an identical blueprint, which would have been moved along the wall as it was built.

Mud bricks need water to be molded, so as well as kilns, the ancient engineers had to dig hundreds of kilometers of canals that brought water from the regionâ€™s rivers to the construction site. Once the wall was completed, the engineers joined up the canals and turned them into a moat on the wallâ€™s defensive side, an enormous earthwork that is still visible today. This may also have been used as a water source for soldiers and workers in the arid plain. 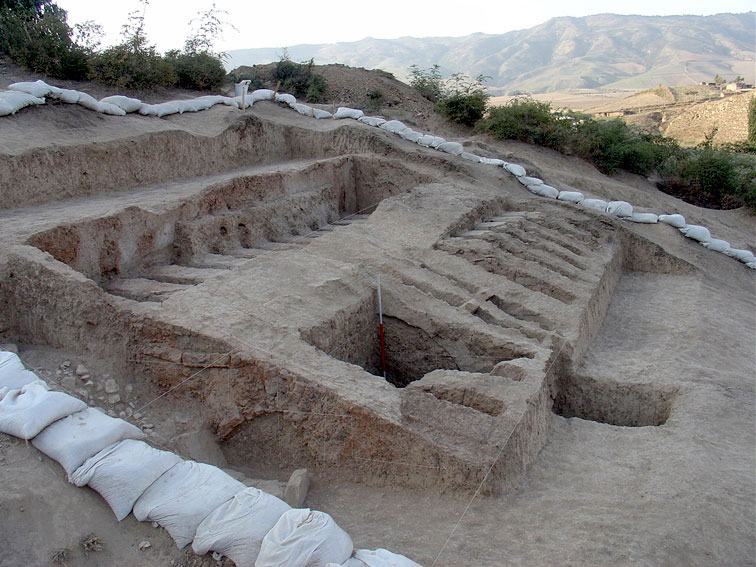 Excavations of a brick kilnâ€™s ruins near the Gorgan Wall. (Credit: Arman Ershadi)

The wallâ€™s design reveals the immaculate planning that went into its construction. Along its entire length there is very little variation: it remains 10 meters wide and 3 meters tall for over a hundred miles. Each brick in the wall is of uniform size and shape (16 x 16 x 4 inches), and the distinctive red color of the bricks gives the wall its local name, the â€œRed Snakeâ€� (â€œQizil Alanâ€� in Turkeman). The wall even crossed rivers, where engineers built dams and sluices, sections of which are still visible in the silty waters 1,500 years later. To add to the wallâ€™s strength, 30 forts also bolstered the defenses, spaced at intervals of between 6 and 30 miles.

To have been effective, the wall must have been constantly garrisoned with a standing army, and indeed excavations of possible barracks buildings in the area suggest that between 15,000 to 36,000 men were stationed in the forts along its length. Organic material found in the forts shows the Sassanian soldiers consumed a rich diet, including fish from the nearby Caspian Sea and crops from the wallâ€™s verdant hinterland. Despite all this, the exact details of the Gorgan Wallâ€™s story are still wreathed in mystery. In 2008, Current Archaeology reported that: â€œNo ancient textual source refers to the Wall, no inscription, and no coin has ever been found on it.â€� Though many theories propose to explain who ordered it built, the wall still refuses to give up its secrets. 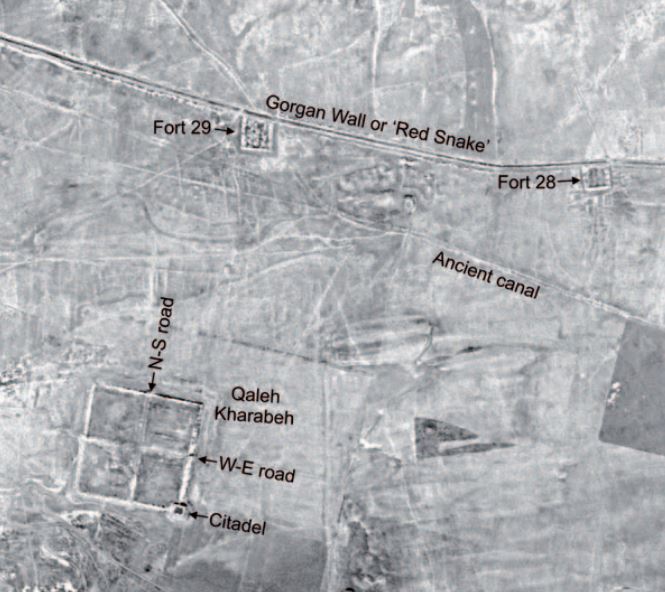 Wonder at the Wall

We also donâ€™t know why the wall was abandoned and left to crumble. Around 200 years after its construction, something changed. All activity at the wall suddenly and mysteriously ceased, and it was no longer manned or defended. Archaeologists speculate that maintaining its enormous standing garrison might have become too expensive, or the threat of Hunnic raids simply faded. Perhaps the troops were needed to support dynastic feuding or an attack on the rival Eastern Roman Empire.

After its abandonment, the wall began to break down as natural weathering processes ate away at the bricks, and it has been covered in places by shifting sand dunes. Human needs have taken their toll as well, as successive generations have digested the wallsâ€™ constituent parts for building materials. Even today, people continue to plunder the wall for its perfectly-shaped bricks, using them to furnish their own homes. 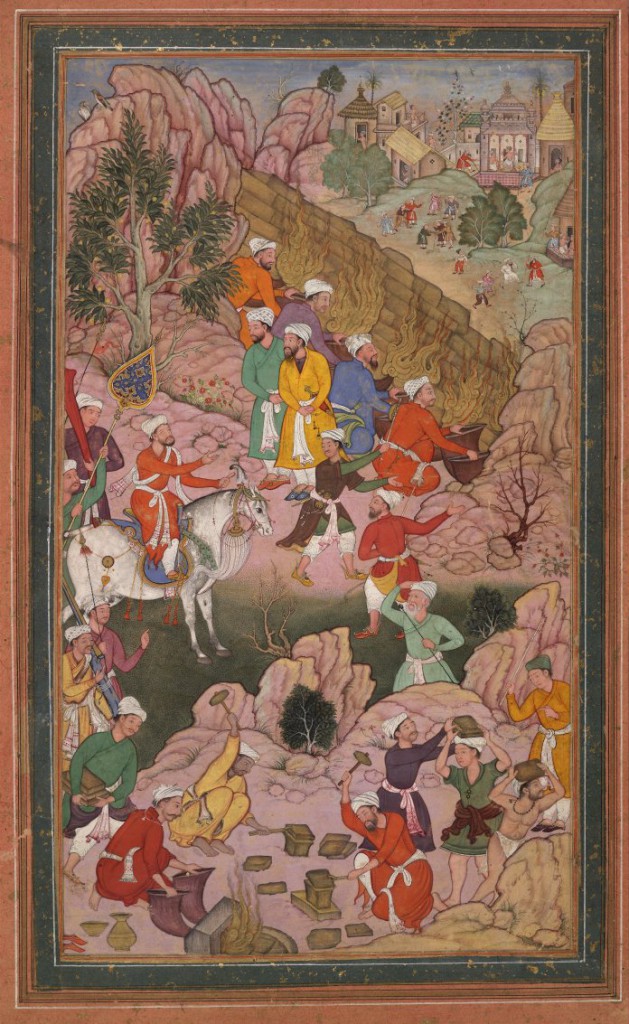 Alexander (Iskandar) building the brazen wall against the people of Gog and Magog. Probably from a Khamseh of Nizami manuscript (c. 1590-1600). (Credit: Wikimedia Commons)

But the Gorgan Wall has made its mark on legend too, inscribed in the popular imagination as deeply as it leaves its marks on the Golestan landscape. In the Quran, a hero called Dhul-Qarnayn is said to have built a wall encased in iron to repel attacks from the savage people of Gog and Magog.

â€œHelp me therefore with strength (and labour): I will erect a strong barrier [wall] between you and themâ€¦ At length, when he had filled up the space between the two steep mountain sides, he said, â€œBlow (with your bellows)â€� then, when he had made it (red) as fire, he said: â€œBring me, that I may pour over it, molten lead. Thus were they made powerless to scale it or to dig through it.â€� (Surat al-Kahf 83-98)

While the historical accuracy of this description has not been verified, many Quranic scholars believe that the wall of Dhul-Qarnayn and the Gorgan wall are one and the same. Dhul-Qarnayn, in fact, is often rumoured to have been none other than Alexander the Great, who is also supposed to have built such a metal wall, known as â€œThe Gates of Alexander.â€� Little evidence for his role in the construction of the Gorgan Wall has been found beyond this legend, though.

Today, the Gorgan Wall is a stark reminder that the history of the world is not just the history of the West. Itâ€™s breadth is a testament to the ingenuity and determination of ancient peoples, and illustrates how, at a time when the order of Western Europe was collapsing, great powers elsewhere were achieving marvels.