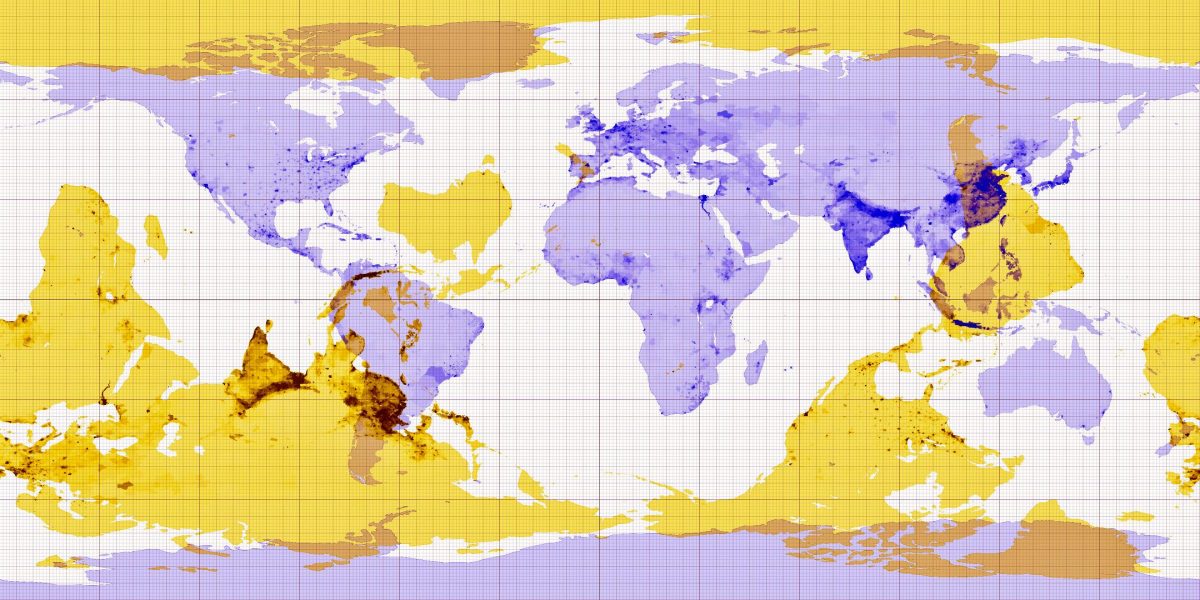 A map showing the Earth’s antipodes — the places where you’d appear on the other side if you dug straight down. Most are in the middle of the ocean. (Credit: imgur)

Almost every child, shovel in hand, is struck by a tempting thought. What if I just kept digging and popped out on the other side of the world? The imagination conjures a muddy face emerging in the middle of a Shaolin temple or some such, China being the nominal “other side of the world” to Americans.

That image is wrong, unfortunately, as a map showing the Earthly antipodes makes clear. Antipodes on a sphere are the pair of points furthest away from each other, and on Earth, most of them are in the oceans. Start digging in the continental U.S. and you’ll find yourself smack dab in the middle of the Indian Ocean. There are actually very few places on Earth where you could start digging on land and emerge dry. Greenland to Antarctica might be your best bet, but you could also make a trip from Argentina to China or Spain to New Zealand.

This is all because Earth is a sphere, of course, meaning that if you dig straight down in the northern hemisphere you’ll end up just as far from the equator in the southern hemisphere. Going from here to China would require digging at an angle. You can check where you’d end up if you bored through the planet with this handy interactive antipodes map (it’s apparently popular, and the query limit has been getting maxed out lately).

Tunneling through the Earth is obviously a fantasy though, given the thousand of miles of molten rock that lie between us and the other side of the world. The furthest humans have ever gotten is the tip of the Kola Superdeep Borehole in northwestern Russia, which reaches a mere 7.5 miles beneath the ground. Even so, it took almost 25 years and ended when temperatures of over 350 degrees Fahrenheit made drilling impossible. The hole didn’t even come near to penetrating the continental crust though — the thin shell of rock that sits atop the rest of the planet.

So, we’d never actually make it through, but for the sake of argument, let’s say we did. If we had a tunnel that could somehow withstand the heat, how long would it take us to reach the other side if we jumped in? First off, this question assumes a few things. Even if we could withstand the heat, the atmospheric pressure on the way down becomes crushingly intense, reaching levels similar to the bottom of the ocean after only 30 miles. You’d also be smashed against the wall of the tunnel, a result of the fact that you’re rotating faster at the surface of the Earth than in the interior.

These considerations aside, calculations taking into account the variable densities of material you’d encounter on the way down put your trip through the Earth at about 38 minutes if you’re falling in a vacuum. If you forgot to hang on once you got there, you’d simply fall back to the other side, yo-yoing back and forth eternally.

Although, put the hole in the wrong place, and you’d just fall in the ocean.