I Asked Apollo 11&#039;s Mike Collins About his Underwear

Excerpt from the Apollo 11 transcript. NASA.

One hundred and 31 hours, 42 minutes, and 30 seconds into the mission, the crew of Apollo 11 was reunited and preparing for the trans earth injection burn that would send them out of the Moon’s orbit and on a path back home. Command Module Mike Collins was still in his pressure suit — mission rules said the astronauts much be suited when redocking the Command and Lunar modules — and was getting ready to take it off for the TEI burn when Commander Neil Armstrong asked, “You ready for your underwear? Mike – you ready for your underwear? You ready for your underwear?” It turns out the underwear in question is the Liquid Cooled Garment, a brilliant piece of engineering born of necessity, and the first time the human biothermal processes was integral to a suit.

No matter what you’re doing, whether you’re sleeping or in the gym, your body is burning calories. Burning calories powers your body from basic organ function to muscle recruitment, and what isn’t used as energy is lost as heat. The heat released from our bodies is measured in British Thermal Units or BTUs. One BTU is defined as the amount of heat needed to raise the temperature of one pound of water by one degree Fahrenheit.

So when it comes to humans and heat, you can think of a human like a machine, say a computer. The harder the body works the higher its heat output, But a human is a low efficiency machine: a small increase in work translates to a sharp increase in thermal output. And neither humans nor machines like to be hot. When you’re running too many programs your computer’s fan might kick into high gear. When you’re running in high gear you’ll start to sweat. That sweat is the excess heat escaping, and as it evaporates it cools our bodies. But unlike a computer that will just shut down and reboot when it overheats, humans overheating can lead to heat stroke, dehydration, and in extreme cases, death.

To say cool humans have two options. We can cool our environment, an easy choice if we’re inside and have air conditioning or at least an array of fans (sort of the same way banks of computers are stored in closed rooms with the AC turned on high). Or we can cool ourselves by putting an icepack on our backs or abdomens to stop heat transfer.

Hot Bodies on the Moon

The fact that humans produce a lot of heat when they work wasn’t news to NASA. The agency — or more specifically flight surgeons and engineers working on life support systems — knew about heat output in BTUs when designing the Apollo Lunar EVA (or LEVA) suit, the ones astronauts would wear walking on the Moon. It had even gathered data on BTU output for various activities to get a baseline of what to expect from astronauts at work. 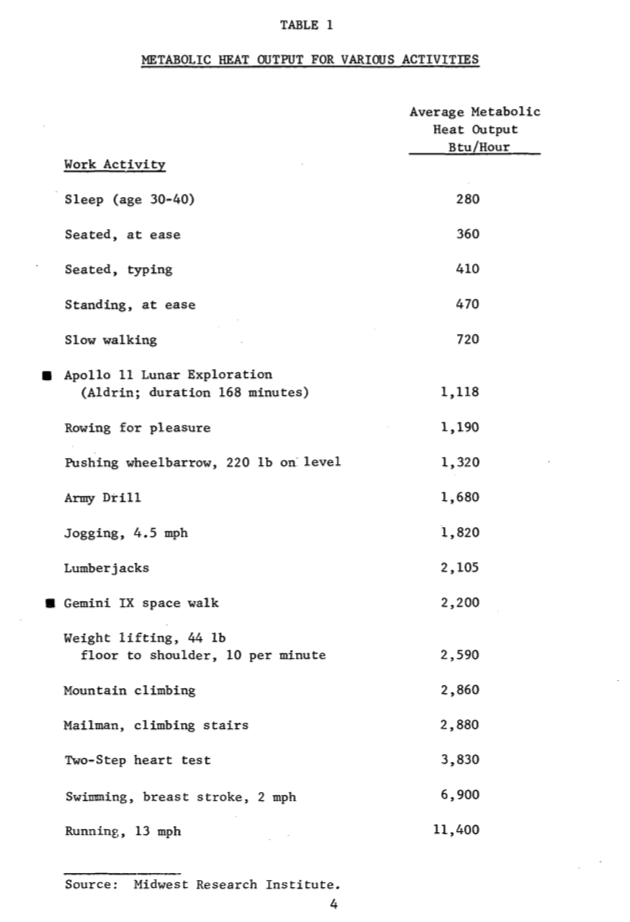 With that data, engineers were able to actually build the human system into the suit, which made for a far more efficient system. And starting off they had the same two cooling methods at their disposal: cool the environment (in this case the microenvironment of the suit) or cool the astronauts’ skin.

Early spacesuits used the former, a kind of in-suit version of air conditioning called gas flow cooling. Oxygen was directed within the suit to flow over the torso and out to the head and limbs, creating a cool environment for the body. It also promoted evaporation of sweat making the suit a “no sweat” environment for the wearer. 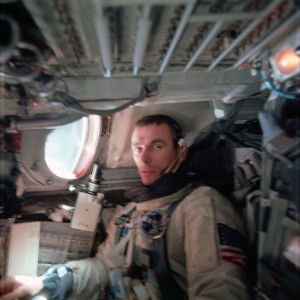 Cernan looking shaky after his EVA on Gemini 9. NASA.

This was the kind of suit astronauts wore on Gemini missions; it was a four-layer garment developed by the David Clark Company that channeled oxygen through the suit for ventilation, cooling, and breathing. But it wasn’t ideal. To cool an astronaut during periods of peak work intensity, the flow rate of the gas was so high it was actually windy in the suit, and the noise led to headaches and nausea. On top of that it wasn’t a great cooling system. During Gene Cernan’s spacewalk on Gemini 9, he worked so hard that even with the suit cooling he overheated. His visor fogged leaving him blind and he sweat so much he lost about 10 pounds of water weight (at least that’s the figure Tom Stafford, his commander on the flight, recalls and told me the other week, and Stafford’s memory is like a steel trap!).

Even before Cernan’s near death experience on Gemini 9, it was clear that working on the Moon would be far more work than a spacewalk, which meant the astronauts would need a better cooling system. The solution came in the form of liquid cooled garments, the spacesuit equivalent of putting an icepack on your body. The liquid cooled suit was pioneered in 1962 by Burton and Collier for the Royal Aircraft Establishment in Farnborough, England. It ran water through 40 small plastic tubes threaded into a woven cotton suit covering the whole body except the head and neck. A demonstration in 1964 at the Manned Spacecraft Centre showed its value. Wearing both the the liquid cooled garment and a full pressure suit, a test subject worked to the point of producing 1,350 BTUs of heat per hour. The suit was designed to remove up to 3,400 BTUs per hour. The subject was so cold he was shivering. It was clear liquid cooling was the way forward for Apollo.

The final product was the Liquid Cooled Garment or LCG. It was a one-piece full-body garment made of netted material. The inner layer was made of nylon chiffon to make it easier to put on, and the outer layer was made of of nylon Spandex. It was in that Spandex that a network of Tygon tubing was woven. Cooled water from the portable life support system or from the environmental control system was pumped through the tubing, and because it was so close to the body it effectively absorbed heat. The excess was transferred to a sublimator housed in the portable life support system.

From NASA’s side of things, flight surgeons on the ground measured the astronauts’ heath via a biobelt attached to the LGC. It had pockets that carried instruments like an electrocardiograph signal conditioner, an impedance pneumograph signal conditioner, and a current converter. Doctors were also able to measure the incoming and outgoing temperatures of the water in the LGC tubes, adding another point of references for how hard and how uncomfortable astronauts were while working on the Moon.

The LCG turned out to be a great solution for overheating. It effectively allowed NASA to control the skin temperature of its astronauts without worrying about controlling the whole environment, keeping them cool enough to work efficiently, getting the most work out of their short lunar stays.

So what does this have to do with Mike Collins’ underwear? Well, I asked him not too long ago and here’s his answer!