How Verbs and Nouns Got Apollo to the Moon 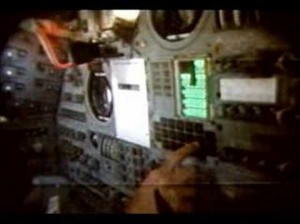 The DSKY in action. NASA.

The Apollo guidance computer did a lot with a little, but the idea that your cell phone has more computer power is a little off. Yes, a smartphone can hold more information but it doesn’t exactly have the software to get you to the Moon. But the comparatively weaker Apollo guidance computer (AGC) did, and though it didn’t have a keyboard and monitor like your desktop, it did speak in the familiar language we use every day of nouns and verbs. 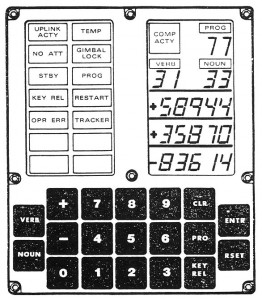 Schematic of the DSKY. NASA.

An entire mission to the Moon was run by the Apollo guidance computer, from checking the guidance platform alignment and firing the engines. All told, it took about 10,500 keystrokes to get to the Moon and back, and every one of them was entered into the guidance computer’s “display and keyboard” interface, affectionately referred to as the DKSY (pronounced like “diss-key”). There were three on board — two in the command module and one in the lunar module — and all three offered information simply and concisely in numeric coded messages or by a series of warning lights.

There were ten warning lights the computer would use to alert crews to a problem:

• COMP ACTY: the computer was turning a program.

• UPLINK ACTY: data was being received from the ground.

• TEMP: temperature of the stable platform was out of tolerance.

• NO ATT: the inertial subsystem could not provide attitude reference.

• GIMBAL LOCK: the middle gimbal angle was greater than 70 degrees.

• STBY: the computer system was on standby.

• PROG: Lit when the computer was waiting for additional information to be entered by the crew to complete the program.

• KEY REL: Lit when the computer needed control of the DSKY to complete a program. Sometimes display information could be “buried” under other routines or by a priority interrupt. The crew could press the KEY REL key to release the keyboard to the requesting program150. When the KEY REL light went on, that signaled the crew to press the key.

• RESTART: Lit when the computer was in the restart program. This was the light that kept coming on during the Apollo11 landing.

• OPR ERR: Lit when the computer detected an error on the keyboard.

• TRACKER: Lit when one of the optical coupling units failed.

The DSKY in the Lunar Module, which had the unique task of landing on the Moon, had three additional lights: NO DAP, ALT, and VEL. These were warning related to failures of the onboard digital autopilot and to warn of altitude and velocity readings outside of the predetermined limits when going in for a soft touchdown on the Moon.

The main keys on the DSKY were the ones astronauts used to input commands, there were the Verb, Noun, plus, minus, numbers keys, and a handful of command keys. Those keys could display different types of information:

• PROG was a two-digit display indicating what numbered program the computer was currently executing.

• VERB was a two-digit display of the verb number being entered (the verb-noun system is discussed below).

• NOUN was a two-digit display of the noun number being entered.

• Three five-digit numeric displays, which showed numbers in either decimal or octal (base eight).

And it’s those numeric commands in Nouns and Verbs that we hear about that sound a little odd in the context of flying to the Moon. But it’s actually beautifully simple. 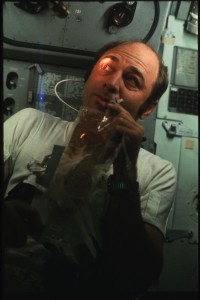 The DSKY behind Ron Evans on Apollo 17. NASA.

My buddy Frank O’Brien who wrote the book on the Apollo Guidance Computer offers an analogy. Imagine you’re a tourist in the city and you only speak a handful of English words. You’re also really hungry. So you find a policeman knowing he’ll be able to help. So you give him one piece of information: eat. You want to eat. Eat, being the verb that you’re after. But there are a lot of things to choose from, so he asks you to narrow down your selection so he can send you to the right place. Knowing it’s a staple food in the city, you say your other English word: Pizza, which is a noun, and in this case the subject of the verb “to eat.” “Eat Pizza” is thus a simple command using a noun and a verb.

The astronauts talked to the computer through the DSKY the same way, entering Noun-Verb combination commands in lieu of a string of written words. To keep it simple, the commands were written out in short hand. For example, V37N31E stood for Verb 37 Noun 31 and Enter to get the program running.

Every time the astronauts entered information to activate a program, they interrupted the software program that was running with any of the 100 verb-noun pairs. For example, Verb 37 (verb 3-7-enter) signaled to the computer that there was a pending change of command. Then hitting 3-1-enter would run program 31, the rendezvous targeting program. The crew could request maneuver angles (verb 50, noun 18), monitor the changes while a maneuver was in progress (verb 06, noun 18), or request the velocity change required for the next maneuver (verb 06, noun 84), among other functions, all of which would then display the information numerically on the DSKY.

There were also different kinds of verbs, extended and regular. Extended verbs (49 through 99) didn’t need a noun to execute a program; they told the computer to perform a simple operation. Regular verbs (00 – 37) were used to display, monitor, or update data, meaning they needed a noun.

It might not seem like it, but the Noun-Verb arrangement and verbiage comes from the fact that the computer engineers who built and used the Apollo guidance computer were also inventing it as they went along. They didn’t have backgrounds in computer engineering because the field didn’t exist then as it does today. But they all spoke English, so carrying over the same language structure simplified things for everyone. It’s a perfect example of the brilliant simplicity that went into so much engineering of the Apollo era.

Want the shorter version? Check out this episode of Vintage Space: