A fallow deer relaxes in a European forestâ€¦120,000 years ago, two of his distant kin were quarry during a Neanderthal hunt. (Credit: Wikimedia Commons/JiÅ™Ã­ Nedorost)

Our hominin family tree includes plenty of meat-eaters, going back a couple million years at least â€” this is not news. But itâ€™s one thing to find evidence of animals that were butchered and consumed by our ancestors and closest kin. Itâ€™s another to figure out how they got their groceries.

Deer bones excavated from a site in Germany and dated to 120,000 years ago are the earliest clear evidence of how our evolutionary siblings, the Neanderthals, hunted.

To be clear, European excavations have turned up older artifacts believed to be used by Neanderthals, or their predecessors, for the hunt: the tip of what, 400,000 years ago, may have been a spear, and 300,000-year-old sharpened wooden staves.

And butchering sites abound in the archaeological record, such as the 250,000-year-old Azraq finds in Jordan, where hominins â€” itâ€™s unclear which species, exactly â€” apparently prepped a wide variety of animals, from ducks to rhinos.

Whatâ€™s still missing is how early members of the genus Homo actually took to the hunt â€” or whether they hunted at all. Itâ€™s possible, for example, that they scavenged.

If they did hunt, was it by throwing spears over a long distance? Driving prey over a cliff? Ambush? Thrusting a spear into the animal from just a few feet away? Paleoanthropologists have considered all of these possibilities, but unequivocal data to confirm them has been scarce, particularly for Neanderthals.

The field of experimental archaeology has advanced our understanding of how weapons and tools were made, and refined ideas about how they might have been used, but thereâ€™s nothing to provide clarity like, well, a couple bones with exceptionally preserved damage inflicted during a hunt.

Getting To The Point

The pair of deer bones analyzed in a study out today, from the Neanderthal site of Neumark-Nord in Germany, offer solid evidence that yes, our closest relatives did hunt, and they did so in a way that probably required close cooperation among members of a group.

The bones, a pelvis and a neck vertebra, are both from male fallow deer skeletons that were originally excavated, along with hundreds of other faunal remains from the site, a couple decades ago. As with other 2018 studies of animal bones previously collected from archaeological sites, researchers recently took a second look at the material and selected these bones for further analysis.

Using microscopic imaging and ballistic experiments, the latter similar to modern crime scene reconstruction, the team determined that perforations in both bones were hunting lesions, a rare but significant find. When a weapon point penetrates the animal and hits bone (ouch), it leaves a ding, so to speak.

If the animal survives, bone continues to grow and model itself around the ding, leaving one kind of lesion that indicates damage followed by healing. If the shot kills the animal, however, the ding doesnâ€™t get touched up, and is preserved as an unhealed lesion.

Such lesions occur rarely, since weapons more typically hit muscle, and theyâ€™re preserved even less frequently in the archaeological record.

Previously, researchers had found damage interpreted as a hunting lesion on a 500,000-year-old horse scapula, or shoulder bone, from Boxgrove, England. The Boxgrove bone, however, is not complete, and only part of the damage is preserved, which makes definitive analysis difficult. 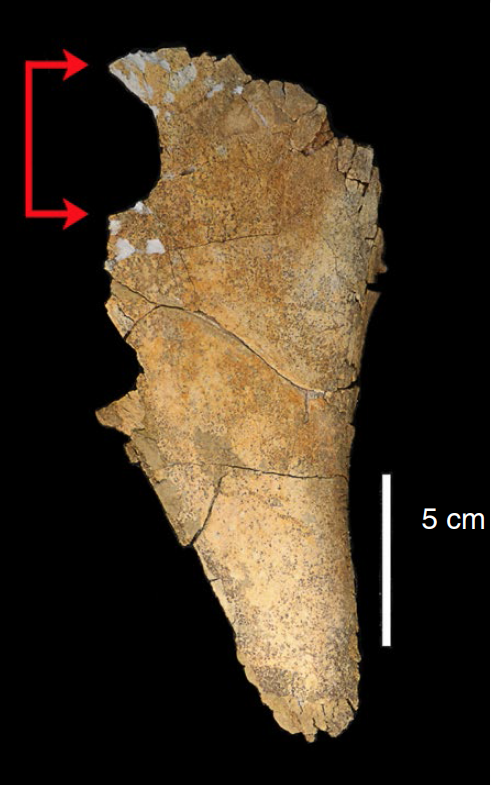 Damage (area within red arrows) to a half-million-year-old horse scapula from England may be evidence of a hunt, but only part of the perforation has been preserved, making it difficult to determine what caused it. (Credit: Annemieke Milks)

The perforations of the Neumark-Nord deer, however, are well-preserved, which allowed the team to determine that they were consistent not just with hunting lesions, but specifically with the impact made by a wooden point.

The damaged pelvis was from an animal 6-7 years old that died shortly after the wound was inflicted. Based on angle of entry, radial cracks and other features of the perforation that point to a high velocity impact, the researchers concluded the weapon was thrusted into the animal rather than thrown. 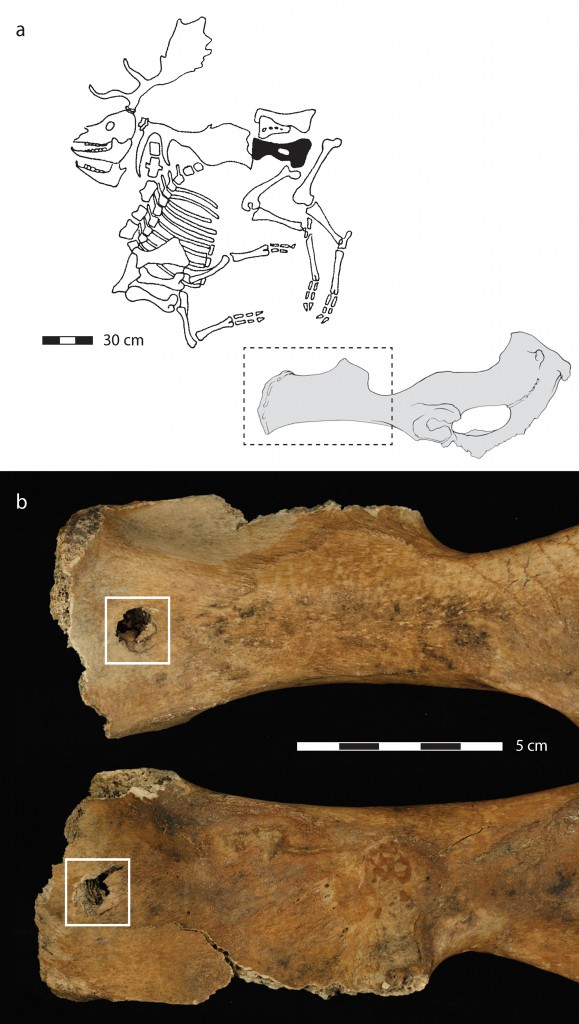 The skeletal remains of a male fallow deer killed 120,000 years ago by Neanderthals included a damaged pelvis: Further analysis confirmed it was a hunting lesion from a wound inflicted shortly before death. (Credit: Eduard Pop, MONREPOS Archaeological Research Centre and Museum for Human Behavioural Evolution, RÃ¶misch-Germanisches Zentralmuseum, Leibniz-Researchinstitute for Archaeology)

Using the same method, the team determined that the other hunting lesion, on a second animalâ€™s neck vertebra, was a lethal strike that resulted from low-velocity thrusting with a wooden spear. 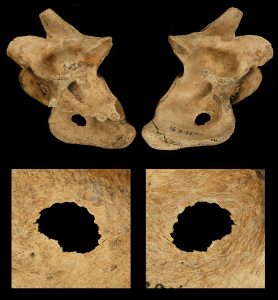 One of the fallow deer studied appeared to have been felled with a spear thrust to the neck, which perforated one of the animalâ€™s cervical vertebra. (Credit: Eduard Pop, MONREPOS Archaeological Research Centre and Museum for Human Behavioural Evolution, RÃ¶misch-Germanisches Zentralmuseum, Leibniz-Researchinstitute for Archaeology)

The Neumark-Nord finds are particularly important as clues to the hunt itself, which took place in a challenging environment. Previous extensive and multidisciplinary study of the German site determined it was along the shores of two adjacent lakes, within a closed-canopy forest. That type of setting is notably different from, say, the open African savannah that early Homo sapiens hunted in.

Bringing down large prey with close-range thrusts using a wooden spear, in the confines of a dense forest, suggests a group hunting strategy, which in turn implies the ability of multiple individuals to coordinate actions during the hunt.

Itâ€™s important to note that the hunting lesions donâ€™t rule out Neanderthals also using longer-range projectile weapons that may have been thrown 100 feet or more toward their target. (Though itâ€™s unlikely that hunting strategy would have been employed among the dense trees of a closed-canopy forest.) This may seem like a small point, no pun intended, but some researchers believe Neanderthals may not have been physiologically capable of throwing weapons longer distances. Settling that particular debate, however, is beyond the scope of todayâ€™s study.

In a commentary published with the new research, University College London paleolithic archaeologist Annemieke Milks gives particular props to the Pleistocene CSI feat the team accomplished: â€œThe ballistics work is experimental archaeology at its best, connecting the physics of impact to fracture patterns of the bone.â€�

Todayâ€™s study, along with the commentary, appears in Nature Ecology & Evolution.