Here&#039;s the first installment in a new series at ImaGeo: dazzling imagery from the new GOES-16 weather satellite

An animation of images from the new GOES-16 weather satellite shows the progression of a day for 12 hours starting on April 21, 2017. (Source: CIRA/RAMMB/NOAA)

With Earth Day just behind us, I’ve been inspired to start a new series here at ImaGeo: semi-regular posts showcasing the truly dazzling imagery now being produced by the GOES-16 weather satellite.

It’s now on its shakedown cruise, so to speak. Scientists are still testing everything out and evaluating the data being returned by the satellite. So it is not yet officially operational.

Even so, just have a look at the animation above, and the others below, and I think you’ll agree that GOES-16 seems to be experiencing smooth sailing so far. (Although I’m guessing that the engineers working behind the scenes might take issue with that!)

The animation up top shows the full disk of the Western Hemisphere, starting at 8 a.m. EDT. At this point, the Earth’s terminator — the fuzzy edge between day and night — is located roughly through the mid-section of the lower 48 states.

Dawn then progresses to the west in one-hour intervals until the entire disk is illuminated by the Sun. The terminator quickly returns on the right, bringing nighttime with it. The animation ends 12 hours after it begins, at 8 p.m. EDT.

The Advanced Baseline Imager, or ABI, is the primary instrument on GOES-16, and it is far more capable than the current imagers found on the operational GOES-East and GOES-West satellites. It can create an image of Earth’s full disk in just 5 to 15 minutes, compared to every three hours for the current satellites.

GOES-16 captured this view of a cyclonic cloud system pushing across Minnesota on April 18, 2017. (Source: CIRA/RAMMB/NOAA)

In terms of its resolving ability, the GOES-16 imager is twice as powerful as our current GOES satellites. It can see things as small as .5 kilometers across, compared to 1 kilometer for its predecessors.

It can also image things in many more wavelengths. In addition to visible wavelengths of light that we can see with our eyes, the imager works in 15 other spectral bands within the near-infrared and infrared parts of the electromagnetic spectrum. These different channels will help forecasters distinguish between clouds, water vapor, smoke, ice and volcanic ash.

Lastly, unlike its predecessors, GOES-16 is an incredibly capable multitasker, as this video demonstrates: 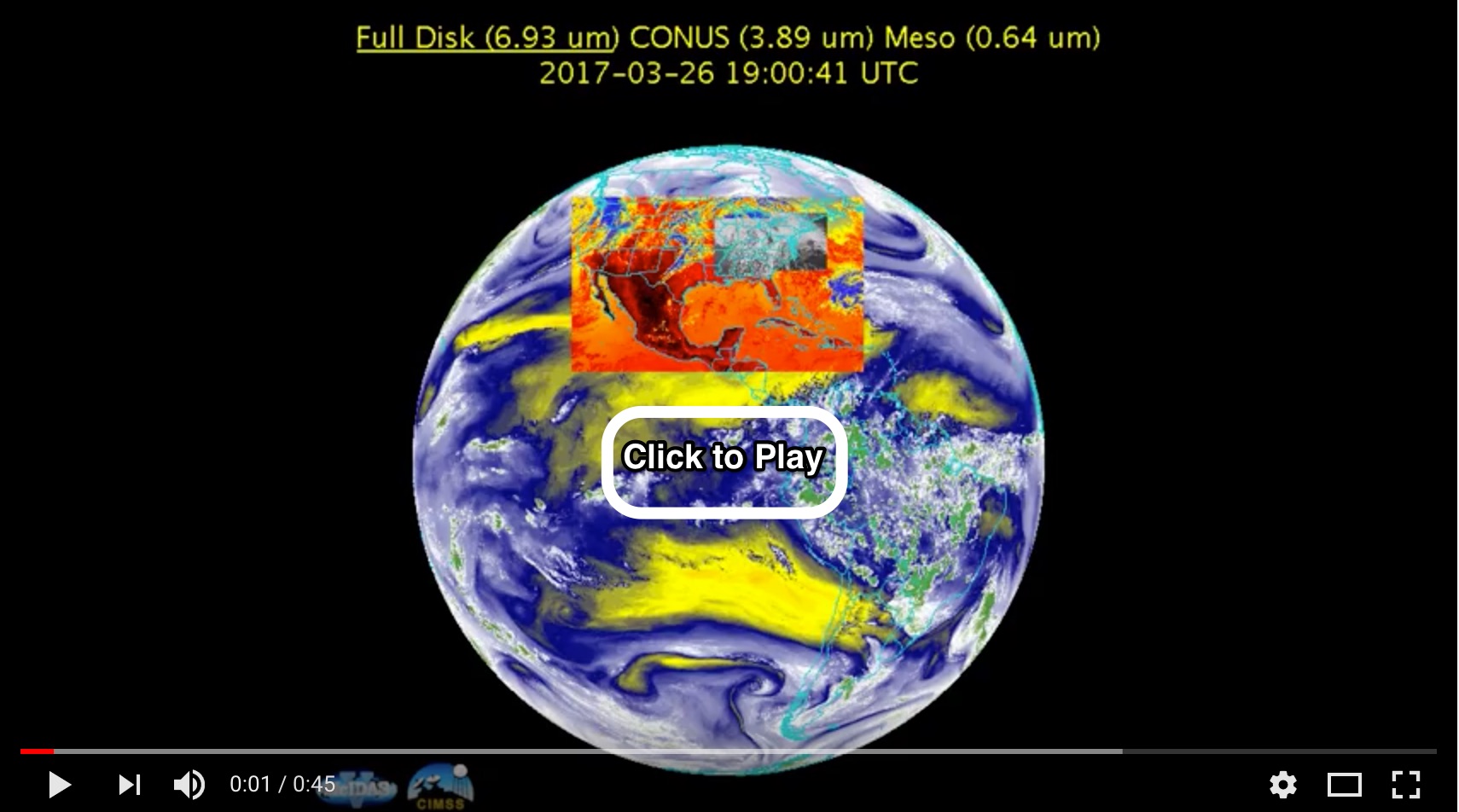 Click to play an animation of of GOES-16 imagery showing its ability to scan three different sectors of the Earth simultaneously.

While GOES-16 busily scans the entire Western Hemisphere every 15 minutes to produce a full-disk image, it can simultaneously scan the continental United States, or ‘CONUS,’ every five minutes. And at the same time it can scan an even smaller region of interest — perhaps an area where severe weather is developing — every 60 seconds.

But that’s not all. When necessary, the satellite’s imager can provide high definition imagery of severe weather as often as every 30 seconds. To get a sense of what that looks like, check out this video: 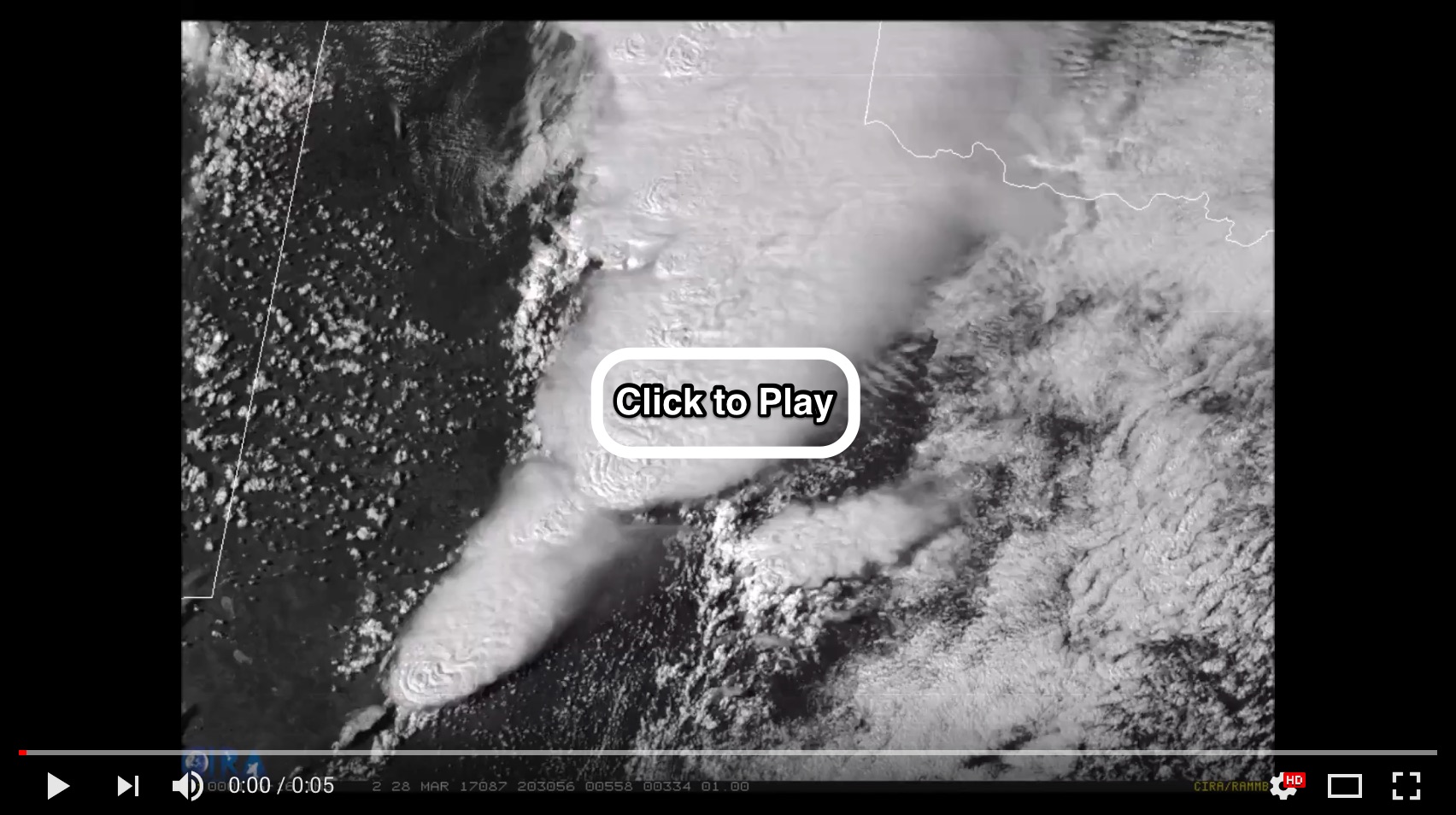 Super-cell thunderstorms develop over Texas on March 28, 2017 in this animation of images from GOES-16. (Source: CIRA/RAMMB/NOAA)

GOES-16 scanned this part of Texas on March 28th, producing a complete image every 30 seconds. The result is an incredibly detailed, nearly-real-time animation of supercell thunderstorms boiling up high into the atmosphere.

Severe weather like this can be very dangerous. So by offering such incredible temporal and spatial resolution, GOES-16 should help forecasters do a better job of warning people who might be in the way.

At the same time, the imagery is absolutely stunning.