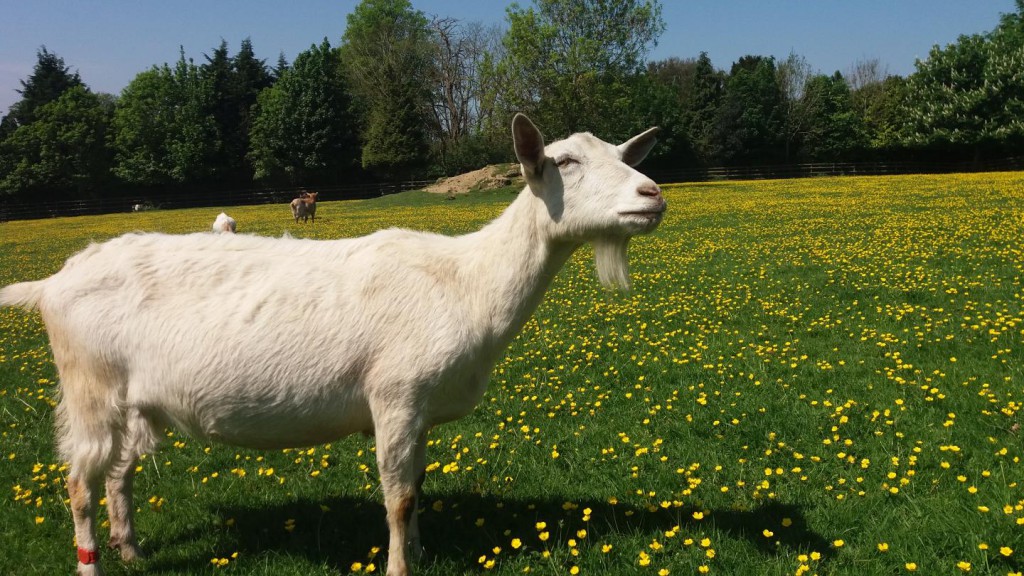 Barnard the goat, one of the animals tested in the study, stands in a field of flowers at the Buttercups Sanctuary. (Credit: Christian Nawroth)

Put on a happy face. That works for creating a positive impression on other people. Research also shows that dogs and horses prefer a smile to a frown.

But what about domesticated farm animals, such as goats, pigs and cows? Turns out domesticated pigs and cattle are smarter than we give them credit for, studies have shown. They may even have complex inner lives.

A paper published Aug. 29, in Royal Society Open Science indicates that domesticated goats are pretty tuned in to our facial expressions.

Twenty goats at a sanctuary called Buttercups in Kent, England, were used by researches from London and Brazil to see if the animals could differentiate between a friendly human face and an angry one.

Images of both were placed in an enclosed area, and researchers systematically guided the goats into the vicinity where the images were. The goats, all habituated to people, spent more time interacting with (i.e., sniffing, standing next to) the happy human faces.

Also, when the happy faces were placed on the goats right side rather than left side, the animals were drawn to them like bees to honey. The researchers say that’s in part because goats and other domesticated mammals process positive emotions in the brain’s left hemisphere. That manifests in right-bias actions. Horses, for example, use mostly their right eye when looking at their kind master. Dogs tend to look over their right shoulder when their owner calls them.

The study builds on the field exploring the inner lives of domesticated animals.

“These results challenge the idea that such socio-cognitive adaptations are limited to companion or working animals, such as dogs and horses,” the researchers conclude. “Therefore, it is possible that goats may also possess the ability to perceive more subtle communicative cues, such as human facial expressions that are linked to emotions.”