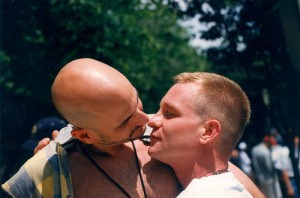 It’s been known for a while that it takes less than a second for people to use their internal “gaydar” to decide if they think a man is homosexual or heterosexual, and such snap judgements tend to be right. But can facial differences be used to distinguish between different types of gay men — specifically, those who define themselves as “tops” versus “bottoms”? To find out, the authors of this study recruited 23 participants from Amazon’s mTurk (including 7 females). The participants were asked to look at 200 photographs of gay men found on an online dating site (100 tops, 100 bottoms) and categorize them as tops or bottoms. Interestingly, they chose the correct roles at a rate better than chance, although they were biased towards choosing the male-stereotypical “top” role. As you might have guessed, the participants were using cues related to masculinity (e.g., thick eyebrows, large noses) to make their choices. The authors conclude with this tantalizing suggestion: “it is possible that similar effects may be found in opposite-sex relationships: women may be able to identify submissive versus dominant men from brief observations of appearance or behavior.”

“In intercourse between men, one of the partners typically assumes the role of an insertive partner (top) while the other assumes a receptive role (bottom). Although some research suggests that the perceptions of potential partners’ sexual roles in gay men’s relationships can affect whether a man will adopt the role of top or bottom during sexual intercourse, it remains unclear whether sexual roles could be perceived accurately by naïve observers. In Study 1, we found that naïve observers were able to discern men’s sexual roles from photos of their faces with accuracy that was significantly greater than chance guessing. Moreover, in Study 2, we determined that the relationship between men’s perceived and actual sexual roles was mediated by perceived masculinity. Together, these results suggest that people rely on perceptions of characteristics relevant to stereotypical male–female gender roles and heterosexual relationships to accurately infer sexual roles in same-sex relationships. Thus, same-sex relationships and sexual behavior may be perceptually framed, understood, and possibly structured in ways similar to stereotypes about opposite-sex relationships, suggesting that people may rely on these inferences to form accurate perceptions.”