FrankenFungus Armed With Venom Toxins Could Join The War Against Malaria 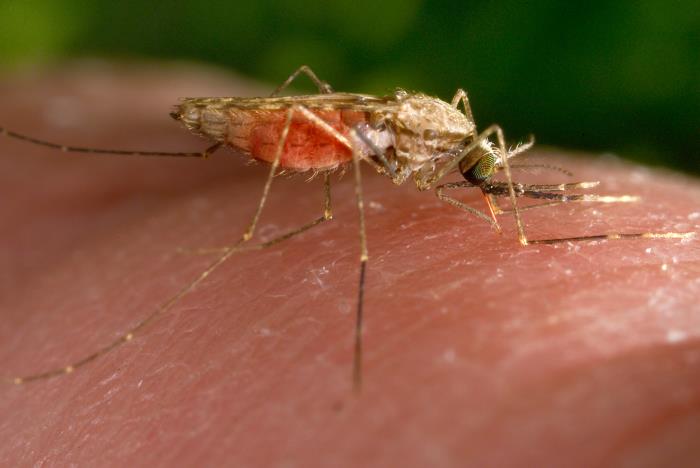 One of the world’s deadliest venomous animals—a female Anopheles gambiae—demonstrating the behavior that makes her so lethal. Photo Credit: CDC/ James Gathany

People are often surprised when I say that mosquitoes are the deadliest venomous animal in the world (the deadliest animal period, really, if we don’t count ourselves). Mosquito bites—and the venoms delivered by them—kill upwards of 750,000 people worldwide every year thanks to the deadly diseases that harbor within. Most of those deaths are thanks to microscopic parasites in the genus Plasmodium, which are responsible for the diseases collectively called malaria. Malaria accounts for around 500,000 of those mosquito-caused deaths, according to the World Health Organization—only a fraction of the over 210 million cases reported every year. Not surprisingly, there is a lot of time, money, and intellectual capital being invested into finding ways to reduce those numbers. And as the vectors, mosquitoes—especially the few species that carry the most devastating diseases—are a key target.

While killing mosquitoes seems like a simple objective, it can be quite complicated in practice. Mosquitoes are hardy little buggers, and rapidly evolve resistance to pesticides. And when effective pesticides can be found, such as DDT, they tend to be a little too effective, killing a wide diversity of insects and causing ecological harm to local biodiversity. In the hope of wiping out disease-carrying mosquito populations, scientists have tried all sorts of methods, from increasing natural predators to releasing sterile male mosquitoes in swarms. But the most recent approach sounds like it’s straight out of a science fiction thriller: an international team of scientists has genetically engineered a fluorescent fungus that wipes out mosquitoes using venom toxins from spiders and scorpions.

In a paper published this month in Scientific Reports, the scientists—led by researchers from the University of Maryland—outline just how effective their FrankenFungus is at killing mozzies. The fungus species—Metarhizium pingshaensei—is a specific mosquito killer to begin with, targeting human-biting, disease-carrying species like Anopheles gambiae and Aedes aegypti. But in the wild, the fungus is somewhat ineffective as a mosquito murderer; it takes infection with many spores and a long time as the spores germinate and grow for the insects to meet their doom.

To speed the process up, the scientists created strains of fungus expressing venom toxins, including AaIT, a sodium channel blocker from the North African desert scorpion Androctonus australis, and ω/κ-hexatoxin-Hv1a, a potassium and calcium channel blocker from Australian Blue Mountains funnel-web spider Hadronyche versuta (both of which are already approved by the U.S. Environmental Protection Agency for insecticidal use). To keep track of expression of the added toxins, the fungal strains were tagged with green fluorescent protein, making them glow under fluorescent light. They then sprayed sheets with the fungus, and hung them in a lab setting as resting places for mosquitoes, exposing the mosquitoes to the sheets for one hour. In follow-up tests, they sprayed mosquitoes with varying concentrations of diluted spores to determine how many spores are needed to kill each mosquito. 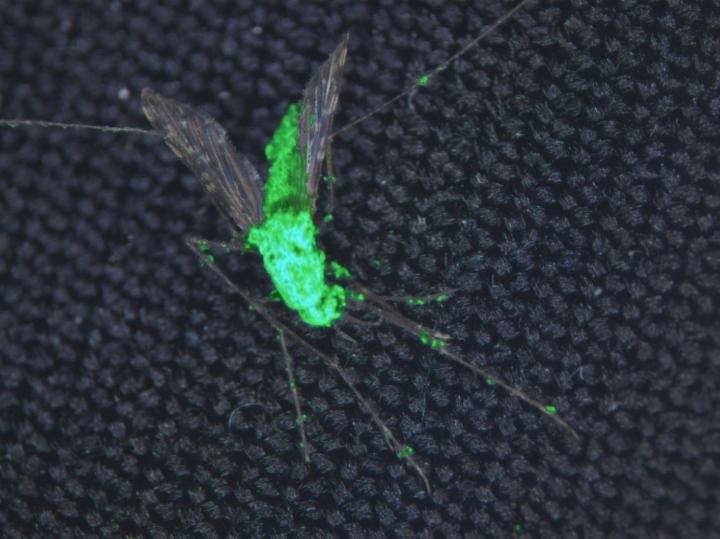 A composite image of a dead mosquito riddled with glowing, genetically-engineered fungus on a black sheet. Photo Credit: Brian Lovett

“Our most potent fungal strains, engineered to express multiple toxins, are able to kill mosquitoes with a single spore,” said Brian Lovett, graduate student in the University of Maryland Department of Entomology, in a press release. “We also report that our transgenic fungi stop mosquitoes from blood feeding. Together, this means that our fungal strains are capable of preventing transmission of disease by more than 90 percent of mosquitoes after just five days.”

The best part is that although the toxins can harm most insects, the scientists added an additional failsafe: they do not become expressed until the fungal spores enter hemolyph (the insect version of blood). Since the fungus only targets a small set of hosts (the spores only penetrate mosquito species), the toxins only get produced inside the targeted vectors. Just to be sure that none of the genetic tinkering affected the host specificity of the fungus, the team exposed honeybees two ways to the most potent engineered fungal strain as well was the wild type strain as a control. No bees were killed by the fungi.

“The toxins we’re using are potent, but totally specific to insects. They are only expressed by the fungus when in an insect. Additionally, the fungus does nothing at all to bees and other beneficial species,” said Raymond St. Leger, senior author of the study. “So we have several different layers of biosecurity at work.”

The next step is to take the FrankenFungus out of the lab and into the field—or, at least, into a contained field-like enclosure which resembles a greenhouse. In addition to testing how well the fungus works on a more realistic population of mosquitoes, the researchers plan to test the fungus on other insects like midges and gnats, which are more closely related to mosquitoes, to rule out non-target effects. Such ‘greenhouse’ experiments, if successful, could pave the way for field trials.

If eventually approved for everyday use, the fungal spores could be sprayed onto black cloths and hung in areas where diseases like malaria are endemic. Mosquitoes land on the cloths to rest and get infected by the spores. If the results presented this month hold, then the fungus would be among the most effective mosquito control methods ever developed, able to effectively eliminate local mosquito populations in a matter of days.

This project is the latest in a growing trend of using genetic alteration to tackle mosquito vectored diseases—an approach that has garnered support from influential groups including the World Health Organization. Around the globe, researchers are testing engineered bacteria and even engineered mosquitoes, hoping to reduce the burden of these diseases. Although many are unsettled by the idea of editing genomes, projects like these reveal the potential for genetic modification to drastically improve the everyday lives of billions of people. The days of fearing FrankenFood are behind us; genetic modification has outgrown the oversimplified vilifications of those who are anti-GMO, and has emerged as a leading technological tool for tackling some of the world’s most difficult and pressing problems.