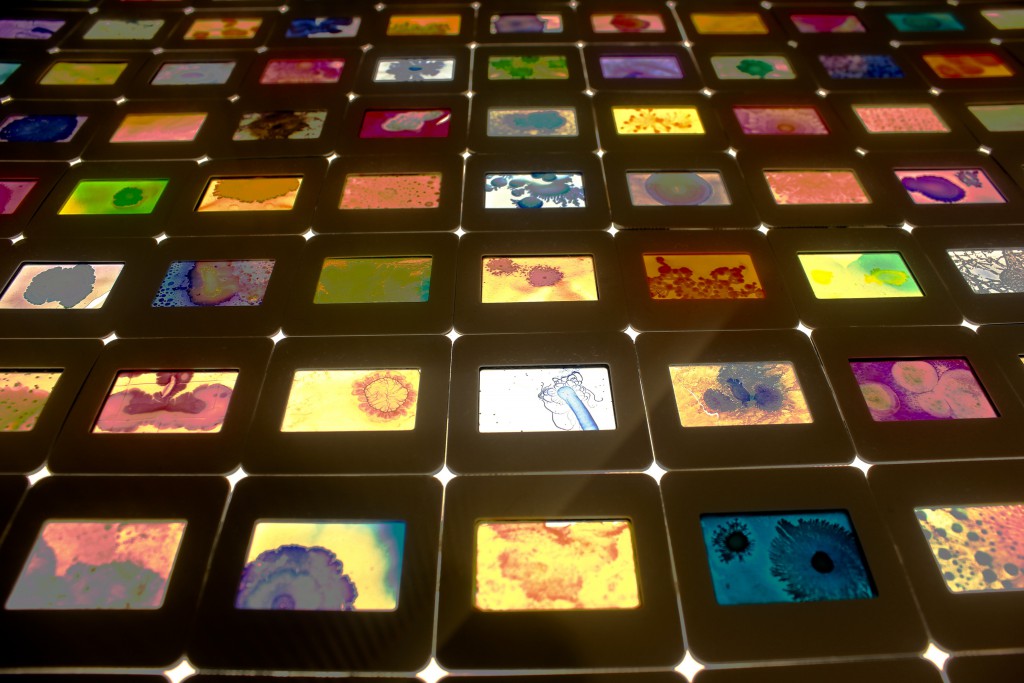 Tal Danino explores the diversity of the microbial world through synthetic biology and artistic projects, like “Microuniverse,” above. (Image: Ana Pantelic)

Bacteria are – like nearly every other life form – social beings, responding to their neighbors and surroundings in intricate ways. Modifying metabolism based on nearby organisms allows single celled creatures to have outsized impact, by making extensive biofilms or swarming to degrade a new food source, for example.

And now, synthetic biologists are working to harness this community-based behavior to fight cancer. Tal Danino, the Director of the Synthetic Biological Systems Laboratory at Columbia University, has been tuning microbial oscillators for years, and the effort is paying off. He presented his lab’s latest work at the Being Material symposium last weekend, hosted by MIT’s Center for Art, Science, and Technology.

“With synthetic biology, we come up with different arrangements of genes to create new biotechnological behaviors,” Danino explained. In one engineered organism, his team created a positive feedback loop in which one gene – luxI – made a molecule – ahl – which in turn up-regulated luxI. But if ahl reached a critical density, it would stimulate synthesis of another gene product – aiiA – which consumed ahl and set the circuit back to square one. When aiiA production was linked to a fluorescent protein, growing colonies of bacteria pulsated with waves of fluorescence every 60 to 90 minutes, revealing a stunning display of density-dependent metabolism.

This proof of concept was a nice light show, but Danino understood the technique’s real potential – the ability to “use bacteria inside your body and reprogram them to sense a particular disease, compute something, and respond.”

Danino and Omar Din, a graduate student at the University of California, San Diego, led a study to deploy density-dependent metabolism against mouse tumors. In this variant, high densities of ahl generated haemolysin E – an anti-tumor toxin – and also stimluated a suicidal gene E that caused cell lysis. This perverse programming created a Salmonella strain that could home in on the anoxic core of tumors, grow to high density, and release a highly localized dose of anti-tumor drug. Hardy survivors seeded subsequent rounds of growth and drug delivery, and when tumors were defeated, the Salmonella lost its preferred habitat, minimizing off-target effects. All told, the treatment extended the lifetime of cancer-stricken mice by a factor of two.

The team’s initial experiments worked well, but there are some imposing obstacles to wider use. “One of the biggest things we fight against,” explained Danino, “is [the bacteria’s] ability to evolve.” This is a common challenge for synthetically designed microbes – if the engineered process doesn’t aid survival and propagation, the organism will do everything in its power to ditch the genes weighing it down. In the case of density-dependent mass suicide, there are obvious reasons evolving cells would want to go in a different strategic direction.

And while the engineered Salmonella is a good place to start, Danino is eager to “design ecosystems of bacteria rather than a single cell at a time.” The complexity of interacting genes, circuits, and signalling molecules will increase dramatically, but communities are generally more stable, bolstered by mutual dependencies and a broader complement of diverse metabolisms.

This research is still in its infancy, of course, but such fine-tuned microbial mixtures – condensed into a small pill – could one day find their way to a drug store near you.