Extraordinary warmth continues to afflict the Arctic, taking a wicked toll on its floating cap of sea ice 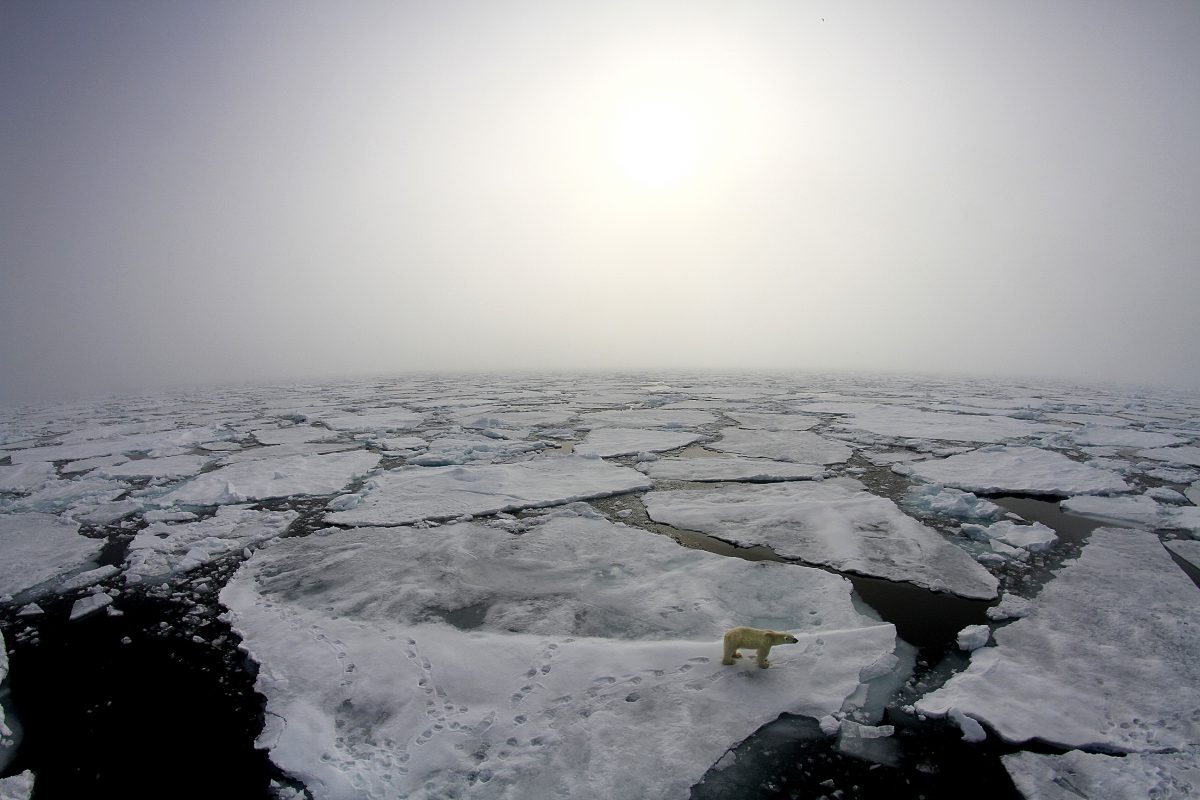 In January, average extent of Arctic sea ice was the lowest on record

A polar bear perches on a slab of sea ice in the Arctic Ocean, as photographed by Marcos Porcires aboard the research vessel Lance during the Norwegian N-ICE2015 expedition. (Source: Marcos Porcires/Norwegian Polar Institute)

A journalist would never write a story saying, “No homes burned down today.” Novelty makes news, not humdrum, every day stuff.

So why another story here at ImaGeo saying that Arctic sea ice has set yet another record for lowest monthly extent since the satellite record began in 1979? After all, in addition to the low extent observed this past January, multiple record lows were also set last year — in January, February, April, May, June, October, and November.

Moreover, on a day-to-day basis, not just month-to-month, record lows are almost becoming, well, ho hum. As the National Snow and Ice Data Center puts it in their most recent update:

Of course I’m being facetious about all of this becoming humdrum. The repetition of record lows is actually quite striking. Something really weird is going on.

And don’t just take my word for it. Mark Serreze, director of the National Snow and Ice Data Center, has been studying the Arctic and its climate for 35 years, and he writes in a recent essay “that what has happened over the last year goes beyond even the extreme.” 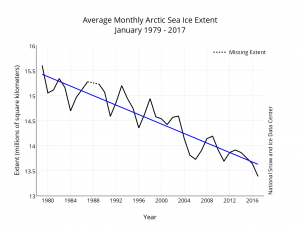 According to the NSIDC’s analysis, the average extent of Arctic sea ice during January was 487,000 square miles below the long-term average for the month. That’s an area nearly three quarters the size of Alaska. Since 1979, the linear rate of decline in the extent of Arctic sea ice for January is 18,300 square miles per year, which works out to 3.2 percent per decade.

December through February 2015–2016 constituted the warmest winter season over the Arctic in the observational record, according to a recent study published in the journal Geophysical Research Letters.  The autumn of that year was also very warm, as was fall this year.

. . . both of the recent autumn/winter heat waves could be related to unusual patterns of atmospheric circulation drawing tremendous amounts of heat into the Arctic Ocean. There has also been a recent shift in ocean circulation, with more warm water from the Atlantic being brought into the Arctic; these warm ocean waters prevent sea-ice formation and warm the overlying air.

This is the kind of thing that may just happen from time to time. But it’s happening against the background of steady warming of Earth’s climate system due to human emissions of carbon dioxide and other greenhouse gases. Moreover, that extra energy in the system appears to be loading the dice, making extreme events like the shocking warmth in the Arctic and resulting impact on sea ice, more likely.

I’ve got a couple of stories in the works on topics closely related to this. One focuses on why we should care about what’s going on in the Arctic. The other, by a student in the environmental journalism program I direct at the University of Colorado, focuses on why scientists are enamored of freezing their boats into the Arctic pack ice during winter’s polar night. I hope you’ll check back here for them.