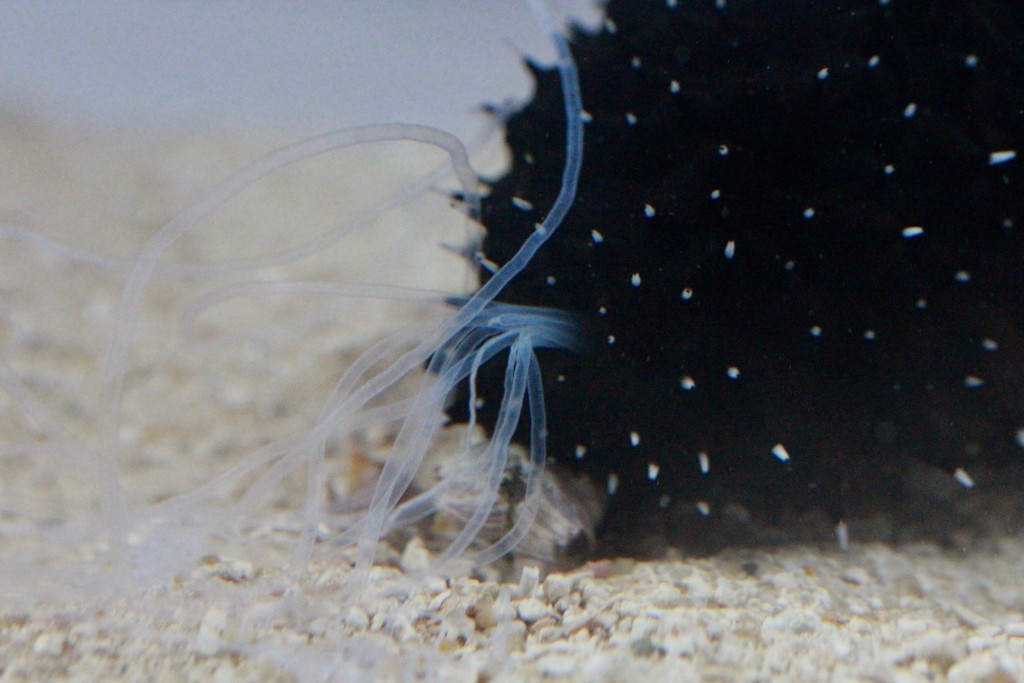 Whoever named the sea cucumber after a vegetable didn’t give it enough credit. Yes, sea cucumbers are soft, warty tubes that scoot eyelessly along the seafloor. But they aren’t helpless. Some secrete a poison that’s deadly to other animals. And some, when threatened, shoot sticky threads out of their anuses to tangle up predators. When researchers collected these bizarre weapons and tested them in the lab, they discovered a material that’s unique among sea creatures.

The threads that sea cucumbers use to trap their enemies are called Cuvierian tubules. Inside the bodies of certain species, the waiting tubules float like limp noodles. When threatened, a sea cucumber contracts its body, tears a hole in an interior wall, and shoots a few of these noodles out its anus. The threads immediately stretch when they hit seawater, growing up to 20 times their original length before stiffening. They also become sticky when they reach a surface. Ideally, that surface is what Patrick Flammang and his coauthors describe as an “imprudent predator.”

Flammang, a marine biologist at the University of Mons in Belgium, and his colleagues studied Holothuria forskali sea cucumbers that scuba divers had scooped up off the coast of France. The researchers gathered Cuvierian tubules by pinching the sea cucumbers on the back and catching the tubules in a bucket of seawater. To compare the elongated tubules to un-expelled ones, they also anesthetized some sea cucumbers and snipped the tubules out of their body cavities.

Under a microscope, the researchers got a detailed look at the structure of both types of tubules. Some of the cells they spotted inside the tubules looked familiar: they were similar to cells that other sea creatures have in a material called mutable collagenous tissue (MCT). This tissue is common in echinoderms, the group of animals that includes starfish, sea urchins and sea cucumbers.

But the researchers didn’t expect to see an MCT here, Flammang says, because in other species these tissues behave differently. Some MCTs quickly switch back and forth between being squishy and stiff, which helps an animal crawl across the seafloor. Others turn just once from stiff to squishy, letting an animal like a starfish lop off one of its own arms to escape a predator. But the sea cucumber tubules do the opposite: they go from floppy to tough and never go back.

The scientists tested the tubules again, this time looking for a protein called tensilin. It’s one of the proteins that helps MCTs stiffen in other creatures. And there it was in the sea cucumber tubules too—indicating a brand-new and “unusual” MCT, Flammang says.

This doesn’t matter only to those imprudent predators in the ocean. The shape-shifting tissues of echinoderms are already inspiring the design of “smart,” adaptive materials, Flammang says. Engineers can use a sea cucumber’s technology to create new substances that change form when we need them to. Nothing vegetable about that.