Europa Lander Could be Greeted by Massive Ice Spikes 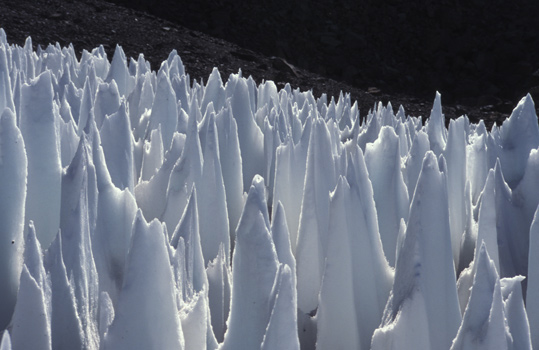 Jupiter’s icy moon Europa has come into the spotlight as one of the likeliest places in the solar system to find Earth-like life. Scientists believe that beneath its icy shell lurks a liquid ocean, perhaps even one that’s relatively warm and hospitable to life. NASA’s Europa Clipper mission, currently with a launch date set for the 2020s, will investigate the moon further from orbit, but what researchers would really like is a lander to either touch down — or, ideally, go beneath — the surface to explore its liquid depths. But a new study published today in Nature Geoscience argues landing on Europa might be complicated, at least in the moon’s equatorial regions, by fields of 50-foot-tall (15 meters) spikes of jagged ice called penitentes.

Penitentes are sharp spikes of ice generated through sublimation, which is when water ice transforms directly from a solid to a gas. The process occurs on Earth in cold, dry places such as the Andes, with some of the first recorded observations of these structures attributed to Charles Darwin in the 1830s (though he erroneously thought they were created by wind).

Today, researchers know that on an initially smooth surface, slightly different sublimation rates due to random, natural variations in evaporation rates can generate pits that grow larger over time, as their mere existence changes the way sunlight is absorbed and reflected by the surface, almost as a runaway effect. The result is penitentes. On Earth, they can reach 13 feet (4 m) in height, and their spikes typically point toward the location of the midday Sun.

Dangers for a Europa Lander?

On Europa, the same cold, dry conditions that generate penitentes could exist — the moon has no atmosphere and the Sun’s angle in the sky doesn’t change, as the world is tidally locked to its parent planet. Not moon experiences no seasonal changes (including pesky warming to induce additional melting), simply a day-night cycle.

But could these structures really last on the airless moon’s surface? Other factors come into play, such as space weathering caused by Jupiter’s powerful radiation belts, which Europa sails through as it orbits the planet, and even meteorites striking the surface. While space weathering might doom any penitentes over the long term on most of the moon’s surface, the study concludes that “surface sublimation rates exceed those of erosion by space weathering processes in Europa’s equatorial belt (latitudes below 23°), and that conditions would favor penitente growth.”

Additionally, “Puzzling properties of the radar and thermal observations of Europa’s equatorial belt can be explained by the presence of penitente fields in this region,” the authors write. The paper further indicates that Europa’s penitentes could reach up to 50 feet tall (15 m) with an average separation of about 27 feet (7.5 m) in this region, and suggests “that could pose a hazard to a future lander on Europa.”

No images of Europa’s surface currently exist with a resolution high enough to confirm whether penitentes actually exist at the equator. However, Europa might not be the first non-Earth world on which these formations have been found, as methane ice penitentes on Pluto might explain the unique “bladed terrain” spotted by New Horizons as it passed the distant world. When Europa Clipper does reach orbit around the small moon, its images may have the quality needed to confirm or deny whether penitentes tower there.

While the image of a field of jagged spikes as far as the eye can see is enough to make any mission engineer’s heart skip a few beats, even if they exist, penitentes needn’t stop future missions from landing on Europa. Simply avoiding landing sites along the equator should ensure that any spacecraft sent to the surface avoids death by impalement.