El NiÃ±o is gestating in the Pacific, possibly heralding warmer global temps and extreme weather in 2019 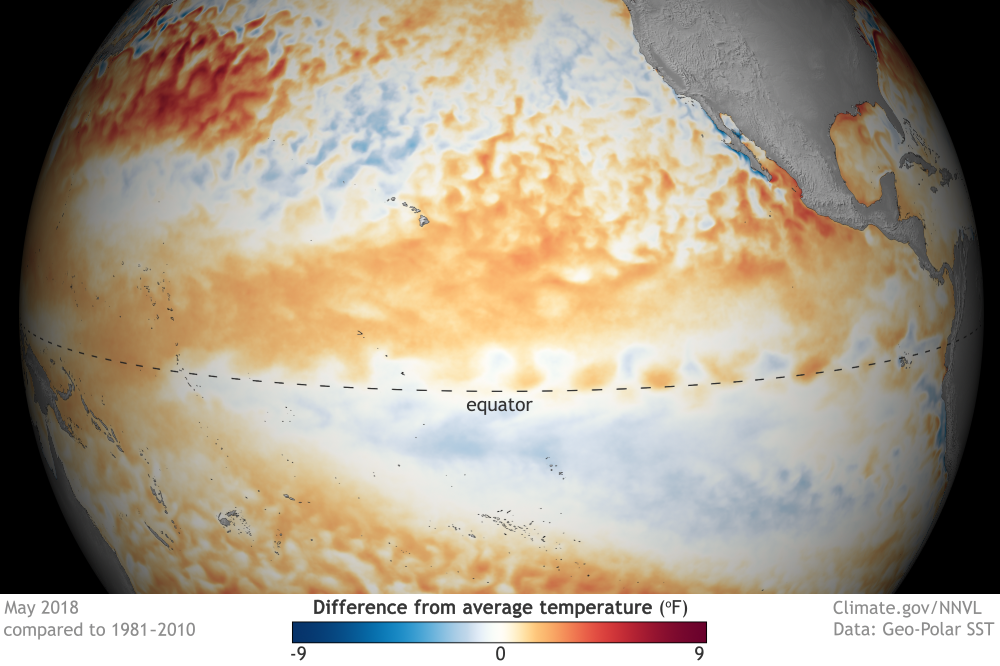 Here is how sea surface temperatures differed from the the 1981-2010 average during May of 2018. (Source: ENSO Blog/Climate.gov)

While 2019 is still a long way off, weâ€™ve now got some strong hints that the coming year could bring even warmer global temperatures, plus droughts in some regions, and floods in others.

These climatic and weather effects would come from an El NiÃ±o that seems to be gestating in the tropical Pacific.

A warming of tropical Pacific waters beneath the surface, along with the output of computer and statistical modeling, have prompted the National Oceanic and Atmospheric Administration to issue an official El NiÃ±o watch. That means conditions are favorable for the development of the weather-altering phenomenon within the next six months.

Based on all of the evidence available now, forecasters peg the odds of El NiÃ±o emerging in the tropical Pacific at 65 percent. It would most likely emerge during fall in the Northern Hemisphere and continue through winter of 2019.

We should care about this because El NiÃ±o can give a big boost to global temperatures, while also reordering weather patterns around the world.

El NiÃ±o, which means The Little Boy, or Christ Child in Spanish, causes heat stored in the oceans to pour out into the atmosphere, boosting global temperatures that are already rising thanks to our emissions of heat-trapping carbon dioxide and other greenhouse gases.

In fact, a monster El NiÃ±o in 2016 contributed to record breaking global temperatures that year â€” a record that still stands. (Although it would have been record warm that year even without it.)

El NiÃ±o also leads to shifts in the jet stream that ultimately cause some regions to be drier than average, and others wetter, as seen in this illustration: 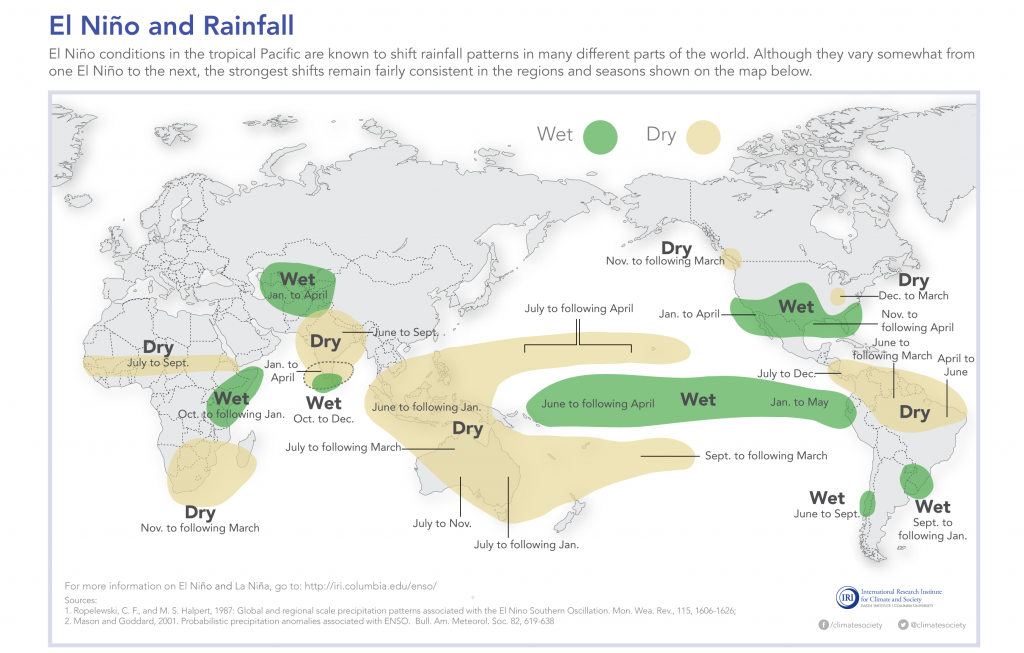 Overall, El NiÃ±o tends to bring drought to Australia, Indonesia, the Philippines, Africa and India. And those drought conditions can have very significant, long-lasting effects.

An El-NiÃ±o-influenced-drought in 2016, for example, caused 5.6 million people to require emergency food assistance into the following year. Some 300,000 children between six and 59 months of age were targeted for treatment of severe acute malnutrition.

Meanwhile, Pacific storms that would usually make landfall in the Pacific Northwest tend to hit California instead, bringing much needed snowpack but also accompanying floods, landslides, and coastal erosion.

On the plus side: El NiÃ±o usually reduces hurricane activity in the Atlantic region. Thatâ€™s because it typically boosts upper atmosphere winds in the Caribbean and Atlantic, causing wind shear that retards tropical disturbances from developing into hurricanes.

But thereâ€™s one big caveat: Every El NiÃ±o develops against a unique backdrop of other meteorological and climatic conditions. This means that things do not always play out as the averages suggest they should.

The hints of a gestating 2019 El NiÃ±o include a massive blob of abnormally warm subsurface water that has been coursing across the tropical Pacific Ocean from west to east. This is the second so-called â€œdownwelling Kelvin waveâ€� to do that since March.

This animation shows how temperatures in the upper 300 meters of the tropical Pacific Ocean have differed from the 1981-2010 average. (Source: NOAA)

You can see that second blob on the move in the animation above, which shows a cross section across most of the Pacific Ocean. The subsurface heat content is now about the sixth highest since 1979.

El NiÃ±o is characterized by sustained anomalous warmth at the surface of the sea in a region spanning a large part of the central Pacific along the equator known as â€œNiÃ±o3.4.â€� And right now, the temperature of those waters is close to the long-term average. But the downwelling Kelvin waves are pointing toward a change.

As a downwelling Kelvin wave moves to the eastern part of the Pacific, the warmer waters will rise to the surface. Thus, elevated subsurface temperatures are often an early indicator that El NiÃ±o is on the way.

Dynamical computer models have been hinting since winter that El NiÃ±o is indeed on the way. But forecasters havenâ€™t been trusting them because of something known as the â€œspring predictability barrier.â€� Now that weâ€™re in June, however, the models are beginning to offer a more reliable picture of the future. And that picture is supported by the output of statistical models, which are based on lots of statistics about historical conditions.

â€œThese models are often more conservative than the dynamical models, and the fact that both sets are largely in agreement is lending forecasters some confidence,â€� Emily Becker writes.

One metaphor that may apply here, albeit loosely, is this: Weâ€™re still in the first trimester, with a long time to go to El NiÃ±oâ€™s due date. Lots could happen between now and then. So weâ€™ll have to make sure to get regular checkups as we go along.