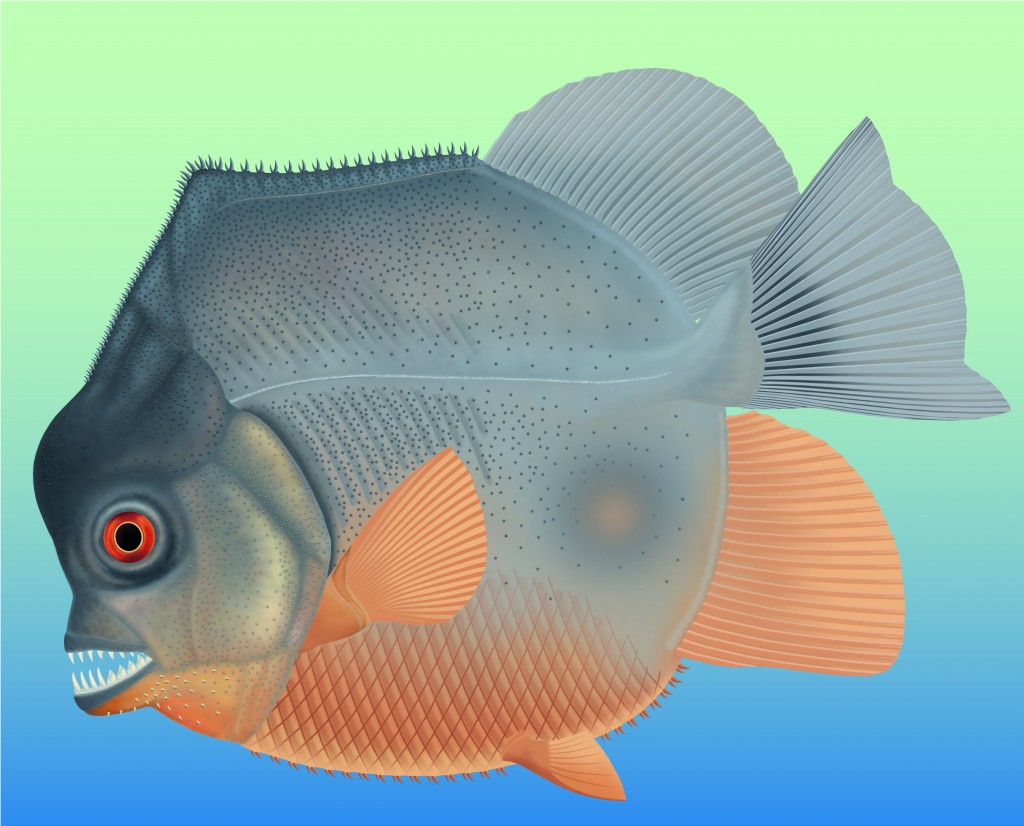 This funky-colored fish was nothing to trifle with: Researchers say newly-described Late Jurassic Piranhamesodon pinnatomus was the piranha of its day. (Credit: Jura Museum)

Jumping right out of nightmares and into my heart (it’s kind of cute, isn’t it?), meet Fincutter, the Bavarian Piranha. Less than three inches long, the Late Jurassic fossil is the earliest ray-finned fish with flesh-ripping teeth — and paleontologists say it was preserved alongside some of its prey.

Piranhamesodon pinnatomus (“pinnatomus” = fincutter) turned up in the same fabulously fossiliferous Bavarian quarry that has given us specimens of Archaeopteryx and other key Jurassic animals.

At first glance, the fish might be mistaken for a piranha, but those famously bitey Amazonian natives are a relatively new species. Instead, paleontologists say it’s a remarkable case of convergent evolution, when two unrelated animals evolve similar traits to exploit the same ecological niche — in this case, more than a hundred million years apart.

P. pinnatomus actually belongs to the now-extinct Pycnodontiformes order of ray-finned fishes. These animals were generally highly-specialized, with most of them sporting cobble-like teeth that were adapted to eat hard-shelled prey. Some fossils of other Pycnodontiformes have been found with preserved shells and sea urchin spines (ouch) still in their guts. But not P. pinnatomus, who apparently swam in search of sweeter, softer fare.

The fincutter’s teeth are arranged like that of Pycnodontiformes but their shape is completely different: long, serrated and pointed. The tooth shape, like that of a modern piranha, is adapted to cut fins and rip flesh out of larger prey.

The jaws of P. pinnatomus also contain clues to its flesh-ripping ways. Unlike other Pycnodontiformes, which had strong jaws capable of crushing shells, the dimensions of the fincutter’s jaws point to speed rather than strength. The length of its jaws was relatively short, however, and, coupled with a body that would not have been particularly swift or agile, it appears unlikely that P. pinnatomus hunted small prey that it grabbed and swallowed whole.

Instead, say the researchers, the combo of traits present in the teeth, jaws and body of P. pinnatomus, as well as its shallow marine environment, are consistent with an animal that ate by ripping off bits of other larger animals. You know what fish does that today? Piranhas, which have been documented feeding on the fins of other fish.

In fact, fossil fish specimens unearthed from the same deposits as P. pinnatomus show injuries to their fins and fin bases, suggesting the animals served as fast food for the ferocious fincutter.

The researchers speculate that Fincutter might have used mimicry, perhaps sharing the same coloration as other, cobble-toothed, fish-friendly Pycnodontiformes, to get close to its prey and then snatch a snack.

Its age of about 152 million years establishes P. pinnatomus as the oldest ray-finned fish with this ability. The study appears today in Current Biology. 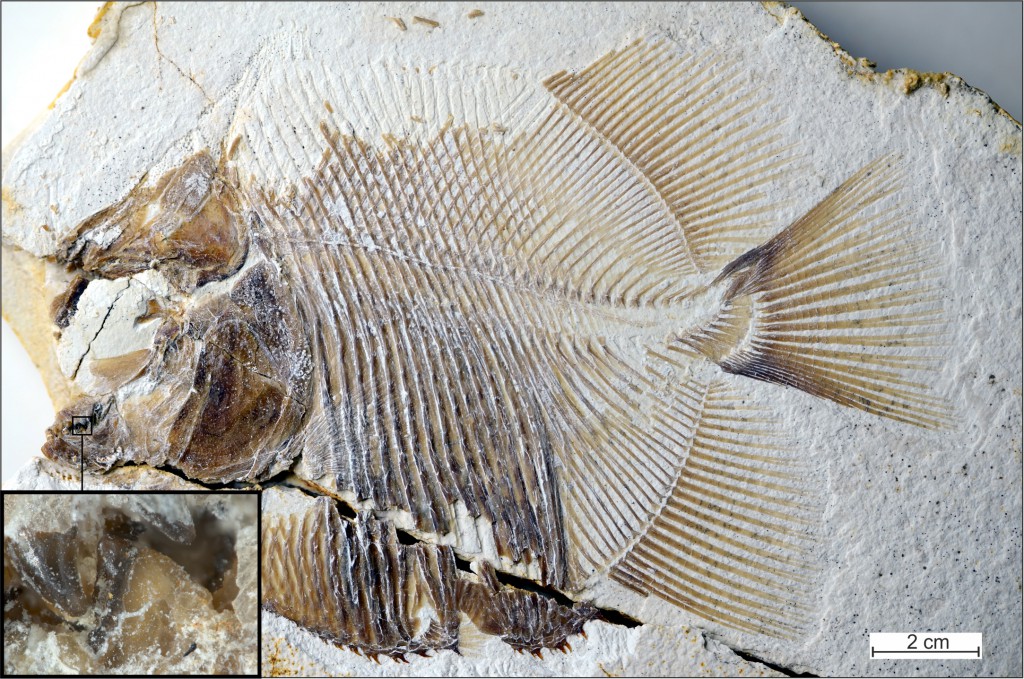 The sharp pointed teeth of the fossil (see inset, lower left) are a clue to the fish’s bitey nature. (Credit: M. Ebert and T. Nohl)