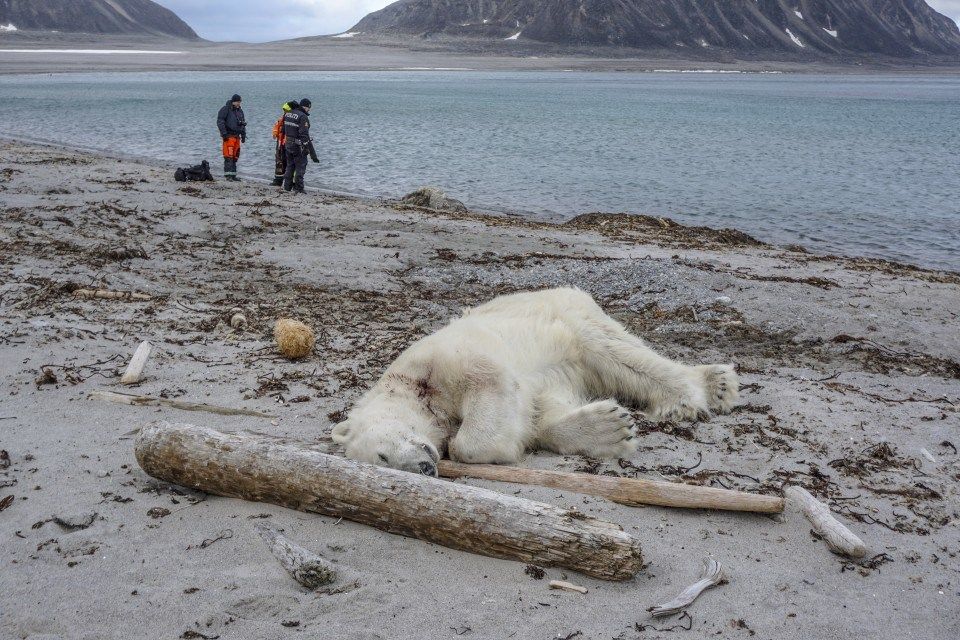 Cruise ship employees, part of a “polar bear guard” unit, shot this bear after it got close to them. Experts say such encounters are happening more often. (Credit: Gustav Busch Arntsen/Governor of Svalbard)

Workers were still fast asleep in their orange tents at Greenland’s Summit Station when the polar bear neared camp. An early riser spotted the bear and shouted to alert campers, sending people to the safety of a hard-sided building nearby.

As the bear scoured the research facility and tents, workers tried to distract the animal. Someone fired up a bulldozer in hopes it would be spooked by the noise. It was about 10 minutes before everyone was safely inside and accounted for, according to National Science Foundation officials.

Summit Station sits at 10,530 feet in elevation — high on the Greenland Ice Sheet and hundreds of miles from the coast. So it’s far from the polar bears’ usual habitat. This was the first bear seen at the station since it was built in 1989.

The site managers, a private contractor, worked with Greenland’s government authorities to come up with a plan fast. They hired a local hunter who fired five warning shots. Then, when the bear didn’t retreat, they shot and killed it.

“We as NSF operating science are the guests of the government of Greenland, so we would never make unilateral decisions on these matters because it’s a sovereign nation and also because they have expertise in dealing with these sorts of things,” says Peter West, NSF Polar Outreach Program Manager.

But Summit Station isn’t the only inland ice cap location site with recent polar bear encounters. Two hundred miles north of Summit, the East Greenland Ice-core Project station had a polar bear in camp this year, as well as one back in 2016. Both of those animals were killed.

Experts say declining sea ice may be pushing these bears into new locations.

“Polar bears in Greenland, and everywhere else, are typically found out on the sea ice,” says Steven Amstrup, chief scientist for Polar Bears International, who notes the animals typically hunt seals on the ice. “What we’re seeing recently is that bears are having to spend more time on land because of the decrease in the availability of sea ice.”

He notes these “extralimital movements” where animals are found far from their typical ranges happen with many species. “The movements far inland like to Summit Station are much more unusual, but they aren’t unprecedented,” Amstrup says.

Now Summit Station is prepping for future bears plans to installing an automated bear detection system this summer. “Until we have something like that in place, we have a person on watch duty and we do have bear deterrents such as pepper spray, air horns, as well as rifles on station,” says Jennifer Mercer, the NSF’s Arctic Research Support and Logistics Program Manager .

With declining sea ice, human-polar bear conflicts are occurring more often. In July, a Canadian man was killed by a polar bear near Hudson Bay, Canada. Another polar bear was killed by cruise ship employees after it moved to attack them on a small island near Svalbard, Norway.
And Amstrup expects more conflicts as bears seek out alternate food sources in human settlements.

“These kinds of movements are not unprecedented, but I think the important thing to keep in mind is that they seem to be on the increase and we expect that they’ll be on the increase,” Amstrup says. “Because as global warming melts more and more sea ice, polar bears are going to be spending more time on land, and when they’re on land they’re going to be exploring places where they think they could find food.”