Dog Domestication: Is A New Study Barking Up The Wrong Tree? 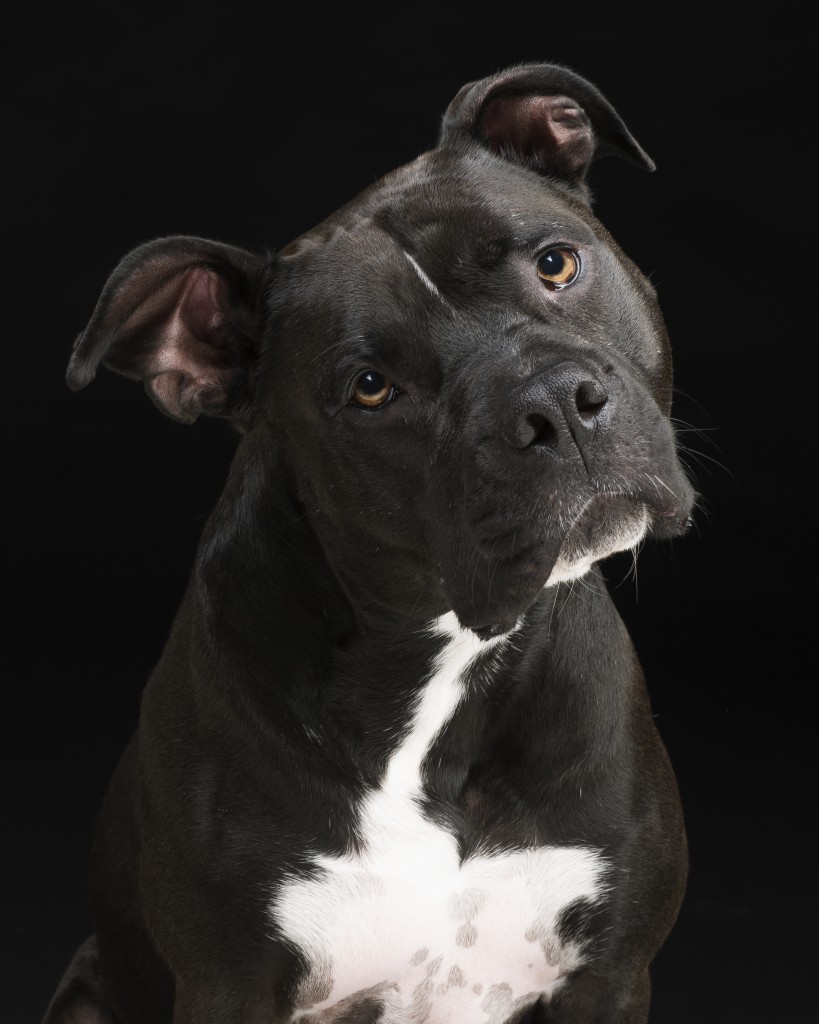 I like to believe she’s thinking “What?! Dog domestication might go back 40,000 years to a single event?” — per a new Nature Communications study — but I know she’s just wondering how long she has to sit still looking Mordorable before she gets another piece of cheese. (Credit William Zuback/Discover)

Dogs are our first friends — they’re the only animal domesticated while we were still a bunch of motley hunter-gatherers. But pinpointing the where and the when of dog domestication has been difficult. With recent advances in ancient DNA (aDNA) extraction and sequencing, it’s only natural that researchers would be rushing to answer those questions. A 2016 study offered a striking new theory about dog domestication, and today a different team offers another, which they say is a direct challenge to last year’s landmark paper.

Do the papers really disagree or is the latest study all bark and no bite? Chew on this:

Look, for a number of reasons, figuring out dog domestication is ruff. For starters, ancient wolves became our furry friends way, way before written records or even permanent human settlements that might leave behind unambiguous archaeological evidence.

Sure, researchers have found a few canid remains than are more than 30,000 years old, but by appearance alone it’s impossible to be certain whether these were wolves or very early dogs, in part because we know that dogs did not descend from modern wolves. They both descended from one or more lineages of ancient wolves, none of which are still around to compare and contrast.

Then there’s the genetic mess that researchers have to make sense of. It’s about as easy as cleaning up after a puppy left alone for the day with a couch full of overstuffed throw pillows.

Once domesticated, dogs still interbred with a variety of wolves, their kissing cousins, and with other populations of dogs as they traveled with their humans across continents. And that started millennia before humans were actively meddling in dogs’ genomes by selectively breeding them for a variety of behavioral and physical traits, which tangled up the DNA in yet another way.

Previous work in the field was also hampered by more than a little snarling, as researchers supporting different theories of dog domestication displayed terrier-like tenacity about protecting their territory.

In the past few years, however, many of those same researchers have joined an international collaborative project, pooling data and resources with the goal of finally figuring out when — and where — ancient wolves became dogs.

The first high profile paper from that effort, a 2016 study published in Science, proposed dog domestication occurred more than 14,000 years ago not once but twice: once in Europe and once in Asia, though the Asian population eventually migrated west and pretty much wiped out, genetically speaking, the ancient Euro-dogs. It was the first time a dual-origin theory of dog domestication had been proposed.

But the arguably most exciting thing about the 2016 Science study was that it analyzed genetic data from several ancient dogs, including the complete genome of one found in Newgrange, Ireland, that was nearly 5,000 years old. It was the first time researchers were able to use such a rich body of aDNA material to investigate the backstory of dog domestication.

Today, however, other researchers are declaring in Nature Communications that they “find no genetic evidence to support the recent hypothesis proposing dual origins of dog domestication.”

So we’ve got two studies, from two highly prestigious journals, apparently facing off. Or do we?

Let’s look at the meat of the matter.

Did someone say meat?!

The Fuss Over Fido

Today’s study reanalyzed the Newgrange dog’s genetic material and also looked at aDNA from two Neolithic dogs, both found in Germany: the Early Neolithic Hexheim dog, which is about 7,000 years old, and the roughly 4,700-year-old Cherry Tree Cave dog, from the Late Neolithic (and about the same age as the Newgrange dog). According to the researchers, there’s a lot of continuity between both German dogs and the Irish dog, and no evidence of a bunch of East Asian dogs muscling onto the scene and replacing European populations. 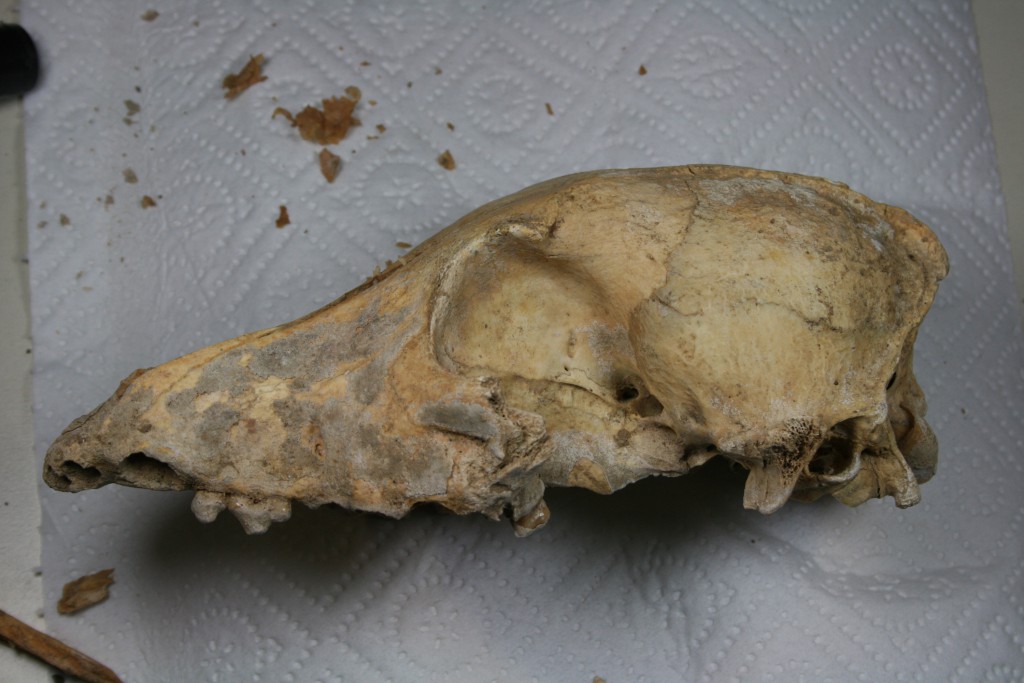 DNA extracted from this nearly 5,000-year-old dog skull (on a 21st century paper towel — I love that) from Germany suggests, say researchers, a single, much earlier date for dog domestication than previously believed. (Credit Amelie Scheu)

Today’s paper also suggests significantly earlier dates for both the last common ancestor of modern wolves and modern dogs (which was an as-yet-unknown ancient wolf) and for dog domestication itself. For the latter, the paper puts the time of dog domestication between 20,000 and 40,000 years ago. Compare that with 15,000 years, which is the average date most other researchers will give when asked (though some argue it was less than 10,000 years ago and a few believe it was 30,000+ years ago).

Wait a minute, I hear you grumbling, how can they tell anything about 40,000 years ago from a 5,000-year-old skull? All of the aDNA-based studies on dog domestication (and other species, too), use a molecular clock to calculate how long ago individuals or species shared a common ancestor, based on how many different random mutations each has accumulated since. Because mutations generally occur at a consistent rate, the more mutations, the further back in time their last common ancestor lived.

That is, of course, a highly simplified explanation of molecular clock modeling and not all researchers use the same clock or agree on how to calculate changes, which is why their conclusions often disagree. The more aDNA samples sequenced and the more research done, the more likely we’ll see a consensus emerge. But that takes a lot of research and a lot of back and forth between teams that might not get the same results in the early stages. That’s science, folks.

Given that researchers are just at the start of the process of using aDNA to get to the origins of dogs, I was a little surprised by the new paper, which reads as if written to raise the hackles of the dual-origin camp. So I contacted a couple of my favorite doggie domestication researchers for reaction. I was expecting a fight. Instead I got a mix of tail-wagging and quizzical head tilts.

“Personally, I like these dates very much, of course…It’s another brick in the wall for early domestication,” says Mietje Germonpré, a paleontologist at the Royal Belgian Institute of Natural Sciences.

Germonpré has argued in the past, with some controversy, for a much earlier domestication date than many other researchers, based in large part on several canid bones from caves in Belgium and elsewhere. She believes the proportions of the remains — some 36,000 years old — suggest the animals were early dogs.

Germonpré adds that the earlier domestication dates line up with those hypothesized by a third team back in 2015, which were based on sequencing the genome of a 35,000-year-old Siberian wolf. The fact that two teams would come to the same conclusion based on completely different data makes that conclusion stronger, she suggests. What would help even more would be a follow-up study including more animals from outside Europe.

“This is only a part of the story, for sure,” says Germonpré. The paleontologist added that she was puzzled the researchers behind today’s paper stuck so narrowly to the three ancient dogs’ genetic material, without attempting to put their results in greater context, particularly regarding one of their other findings. According to today’s paper, eastern and western dogs diverged about 17,500 to 23,900 years ago, suggesting the overall population was reduced and then split.

“Eighteen to 21,000 years ago was the time of the Last Glacial Maximum in Europe,” Germonpré says. “The (human) population was getting lower because of a colder and more severe climate, so if there were fewer people, it would make sense that there were fewer dogs. I was a little bit surprised that they did not mention this.”

One researcher who doesn’t seem surprised about anything in the new paper is Greger Larson, an evolutionary biologist at Oxford University and one of the authors of the dual-origin theory. He has also been the leading voice in ongoing collaboration throughout the field.

“They’re not bringing a smoking gun,” says Larson, shaking off the numerous direct challenges to the 2016 hypothesis in today’s paper. In fact, dig deeper into the data, says Larson, and you’ll find a lot of overlap in both papers’ confidence intervals — the often broad date ranges, with varying probabilities, coughed up by molecular clock models.

The papers are not actually in direct conflict, he suggests, believing instead that they are just two pieces to the same puzzle.

Larson did take exception to the upper limits of the date range today’s authors suggest for dog domestication. Their range of 20,000 to 40,000 years is based on their calculated time of the last common ancestor of modern dogs and modern wolves living about 36,900 to 41,500 years ago.

“It’s naive to conflate divergence with domestication,” he says, adding that the ancient wolf population that led to dogs is almost certainly extinct; without more data, we can’t tell for certain what it was, when and where it lived or when it started cozying up to humans. Yet.

Which might be why, minor quibbles aside, Larson seemed happy with the new study, and was already looking forward to how it will fit into future research: “They’ve brought two new ancient genomes, which is great. Every new genome we have is fantastic.”