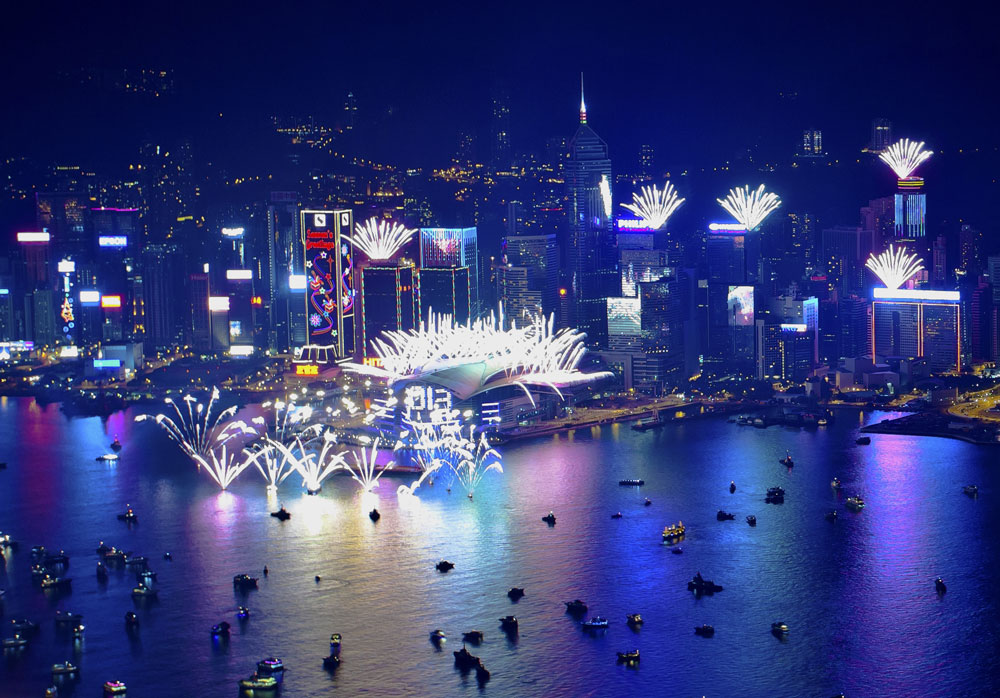 This Fourth of July, as you and your family settle on a sandy beach or grassy lawn to watch a fireworks display, you’re probably not thinking about the science behind the explosives you’re witnessing. In fact, you probably are not even thinking of them as explosives. But that’s exactly what they are—-and there’s a lot of science that goes into creating that dazzling display of fire and colors.

Fireworks often comprise mixtures of oxidizers and fuels that are ready to participate in combustion chemical reactions. When given enough energy to begin the reaction process, the oxidizers and fuels react to generate heat, smoke and reaction products such as carbon dioxide, carbon monoxide, water vapor and nitrogen. The heat generated can be used to excite “coloring agents,” or metal ions, that then emit the colored light we are accustomed to seeing in fireworks. The metal ions commonly used in pyrotechnics are sodium (yellow-orange), calcium (red-orange), barium (green), strontium (red) and copper (blue).

While fireworks are exciting to watch, they—like all explosives—come with risks. For starters, they can be dangerous. In 2015, fireworks were responsible for 11 deaths and nearly 12,000 injuries, according to the U.S. Consumer Product Safety Commission.

At Los Alamos National Laboratory, where I work as an explosives chemist, we pay a lot of attention to things that blow up—and we’re especially interested in how to make them safer. The trick with any explosive—from fireworks to propellants to explosives used in nuclear weapons—is that their ability to release tremendous energy on demand is also what can make them inherently unstable. Accidental discharge can have catastrophic consequences.

But making them safer is more complicated than you might think. Making an explosive safer tends to reduce its performance, while increasing its performance typically makes it somewhat less stable. One of the grand challenges in explosives research is to overcome this paradigm. So the question is: Can you create an explosive that performs just as well as conventional explosives, but is safer?

A unique class of materials that we have been studying gets us closer to answering “yes.”

While investigating a class of compounds known as high-nitrogen materials, our group has discovered some very interesting properties. High-nitrogen materials (Hi-N) are chemical compounds that contain a large number of nitrogen atoms and relatively few atoms of carbon, hydrogen or nitrogen. Some of the Hi-N materials we have discovered and studied seem to go against the “high performance–less safe” trend typically observed with conventional explosives. We call these materials “outliers.”

Our group recently synthesized one example of an outlier material. By uniquely arranging carbon, hydrogen, nitrogen and oxygen atoms—the basic building blocks of all explosives—into a novel molecule, we found that the material displayed an extensive hydrogen bonding network. It created a “glue” strong enough to bind the molecules together, but weak enough that an unwanted striking force, spark or friction can separate the molecules without triggering a detonation. This property, in addition to others, makes this material safer to handle and use than conventional explosive materials but still allows the molecule to be as high performing as some conventional explosives.

Interestingly, other Hi-N materials we have developed also have properties that make them perfectly suited for applications in civilian and military pyrotechnics. Because they contain very little carbon and hydrogen, these Hi-N materials burn with little or no smoke production. When you watch a fireworks show, you no doubt see huge amounts of smoke. In that smoke is soot that settles onto the ground or in water below, potentially harming humans or wildlife. Not only are the new low-smoke Hi-N materials better for the environment, they also make fireworks and indoor pyrotechnic displays at concerts, sporting events and other performances more enjoyable to watch.

In fact, work performed by our group in the early 2000s using Hi-N compounds to produce low-smoke pyrotechnics has extended to commercial applications over the past several years. Numerous pyrotechnic devices have been developed for indoor entertainment venues such as the Super Bowl, the Olympics and concerts that are based on high-nitrogen, low-smoke pyrotechnic technologies. Beyond the civilian benefits, our work has formed the foundation to help military scientists develop military pyrotechnics (such as flares) with a dramatically reduced impact on health and the environment.

While there’s still more research and testing to be done, high-nitrogen materials hold a lot of promise for making explosives and fireworks safer for both their handlers and the environment. And that’s good news for everyone.