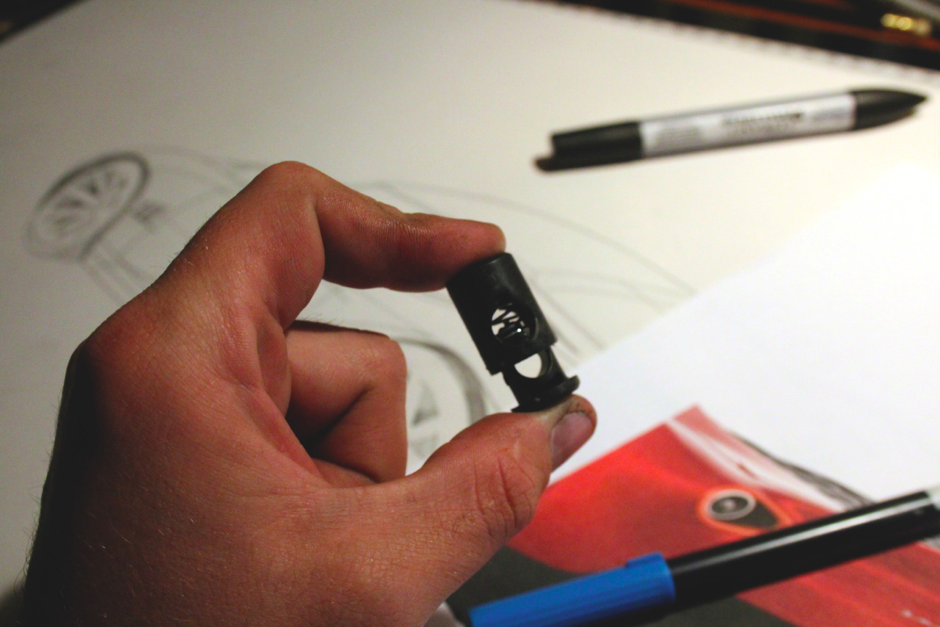 When I hit a mental roadblock while I’m working, moving always helps. I can’t keep my brain moving unless my body is moving. I might get up from my desk and take a little walk but if I’m in a time crunch I’ll just fidget around in my chair or tap out a fun rhythm. As a growing body of research shows, cognitive functioning increases when we move. In other words, moving helps us think.

In his first foray into fidgeting, Karlesky made a few simple computer game applications, surveying users about their gaming experience. One game mimicked playing with bubble wrap, allowing users to pop infinitely reinflating animated circles. Karlesky expected brief responses to his surveys… “That was boring”, or maybe “I would play that game again.”  Instead, he found users would relate his games to their fidgeting toys of choice.

Conversations led to enthusiastic, long-winded stories: “They would go on and on about how they wanted it to feel in their hand, what they liked about it, where they got it,” he says. “They wanted my games to be ‘squishier’ or maybe ‘pokier.’ They would say ‘I want it to have a different kind of snap.’”

Instead of brief feedback on his apps, Karlesky was given thorough analysis of the perfect app he could make to mimic what individuals were fiddling with at their office desks.

Cue Fidget Widgets, Karlesky and Isbister’s growing citizen science database where people can upload a photo of their fidget with a description of how or why they play with it. As shown by the database, not all desk toys are manufactured to be twiddled with while scripting an email. Items are often repurposed as fidgets.

One Tumblr user who creatively goes by “01101101001101” explains how he appropriated a plastic toggle that fell off the end of his sweatshirt. “The spring always feels so satisfying to squash and release when stuck finding that creative breakthrough.” No longer able to tighten his coat hood around his face, “01101101001101” instead uses his toggle to maintain mental momentum through difficult problems at work. This is a trade off he is willing to make.

Karlesky attributes the need for fidgets during computer work to a computer’s sleek design. Computers are not exciting to the touch because they are built purely for the functionality of typing, moving a cursor and viewing a digital screen. This doesn’t attend to the human need to self-regulate, or fidget, in an age when workers spend hours a day staring and typing.

“When we work we aren’t just an input output loop,” Karlesky says, contrasting human mental wandering with algorithmic linear thinking. Algorithms simply receive a command and output a response, without even the capability to divert from a task.

Computer use permeates daily life so design must address computers as not just tools, but as an aspect of everyday life. Initially, research about daily life may seem scientifically trivial but its relevance make it all the more scientifically important. Fidgeting has particular implications in improving the work-flow within the ADHD community, a group that expresses excitement about the growth of Fidget Widgets. Past research on self-regulation is minimal, and Karlesky hopes to fill that empty space, just as he hopes to intentionally fill the space around workers and their computers.

Karlesky’s doohickey of choice is a set of Legos. In a single hand, he twirls Lego bricks around each other,  snapping them together and pulling them apart. But these aren’t just any old Legos; they are an emblem of his relationship with his engineer wife. With both of them interested in structure and design, he ask her out by presenting her with a two engraved Legos, one with his name and one with hers. “I feel like we’re building something together”, he said. And with that, a romantic gesture became an avenue of self-regulation for them both, as each has a set.

With his work, Karlesky is expanding the field of “human-computer interaction” to not just include the computer and the human, but the space in which humans interact with the computers. In his fantasy future, computers may be bendable or fuzzy or bumpy, improving our mental focus by making computer work more physical.

If you fidget, you can contribute to the project—and to science— by uploading a photo or video of your favorite toy. Does it have sentimental value? Was it created for fidgeting or is it appropriated for the purpose of playing? Join the 170 current fidgeters and help researchers improve the field of human-computer interaction!

Nina Friedman recently received her bachelor’s degree in neuroscience from Colorado College. In her free time she enjoys making bioscience memes and rock climbing in the North Cascades of Washington state.