Could Life&#039;s Earliest Stages Have Survived Without a Key Ingredient? 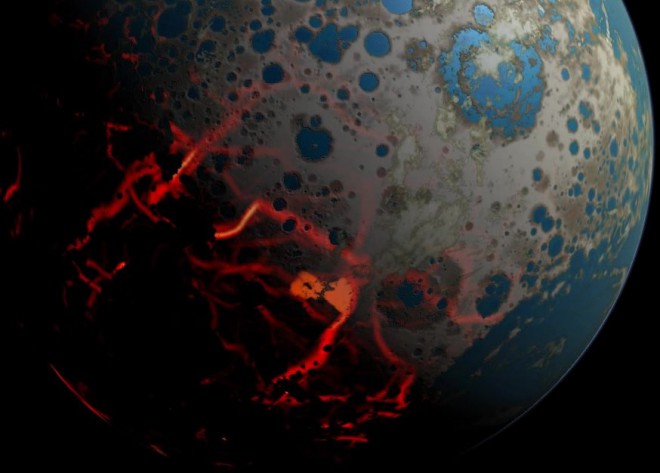 During the early Earth’s heavy bombardment, could metabolism have started without phosphate, one of life’s key ingredients? (Image: NASA/Simone Marchi)

“CHNOPS” is one of science’s most revered acronyms, an amalgamation of letters that rolls of the tongues of high school biology students and practicing researchers alike. It accounts for the six elements that comprise most biological molecules: carbon, hydrogen, nitrogen, oxygen, phosphorous, and sulfur.

Biologists have traditionally assumed that all six elements were prerequisites, as each one is found in several of life’s most essential molecules. But what if earlier life forms weren’t quite so demanding? Could a sustainable metabolism actually exist without one of these seemingly essential elements? To explore this revolutionary possibility, Joshua Goldford, a graduate student in Boston University’s Bioinformatics Program, led a theoretical study taking aim at phosphorous and its most biologically utilitarian derivative, phosphate.

There are reasons to believe that phosphate’s availability could have been a limiting factor in life’s early stages: it’s scarce on a geological scale, and even when it is present, it’s often tightly bound to rocks and minerals. In phosphate-free thought experiments, previous researchers have proposed bigger roles for sulfur and iron, as well as thioesters (relatively reactive molecules that contain a carbon, oxygen, and sulfur-associated functional group).

Goldford and his colleagues wanted to see how a phosphate-free world would map onto the contours of microbial biochemistry: could you generate everything a cell might have needed? To find out, they adopted a “reaction network” approach, essentially lumping all known metabolic reactions together regardless of the modern organism they came from. This broad umbrella is a bit of a leap, as modern reactions have had billions of years of evolution to explore new functional space, but the study posits that “many of such reactions could have been initially catalyzed to a much weaker and less specific extent by a number of small molecules,” and that this scenario “is not new to origin of life research.”

Remarkably, a core, phosphate-independent network of 315 reactions and 260 biomolecules emerged. It could build organic carbon through the reductive TCA cycle, which is believed to be an ancient carbon fixation pathway. Ten amino acids could be made, and the rest could be harvested from natural, abiotic sources. Genes in this core network were more highly represented among modern microbial genomes, pointing to their foundational role. Proposed enzymes were smaller, on average, than modern life’s mean enzyme – a finding consistent with the scientists’ proposal that ancient catalysts may have consisted of smaller, more primitive amino acid chains.

This core set of reactions may provide the raw materials for cells, but what’s powering them? After all, the energy currency of all biological reactions – adenosine triphosphate, or ATP – contains, you guessed it, three phosphate groups. Tear one off and approximately 50 kJ / mol of energy is yours to do with what you will, driving energy-requiring reactions forward to build many of the more complex biomolecules.

Goldford proposes that thioesters – and a molecule called pantetheine in particular – could play a similar role: when an acetyl group is stripped off, 33 kJ / mol of energy is generated. It’s not as much as an ATP molecule, but it’s enough to ease the energetic burden of the hypothetical cell and enable a more luxurient way of life.

While phosphate may not have been required for a core set of proto-biological needs, inheretance of genetic material isn’t part of the equation: RNA and DNA both involve a phosphate molecular backbone, without which genetic material as we know it wouldn’t be possible. Nonetheless, by kickstarting biochemical processes in the absence of phosphate, metabolic networks may have been poised to jump into an RNA world once phosphate became more readily accessible.

As useful as a phosphate-free metabolic network could be in helping to explain a longstanding disconnect between geology and biology, we probably won’t be seeing “CHNOS” in textbooks any time soon.