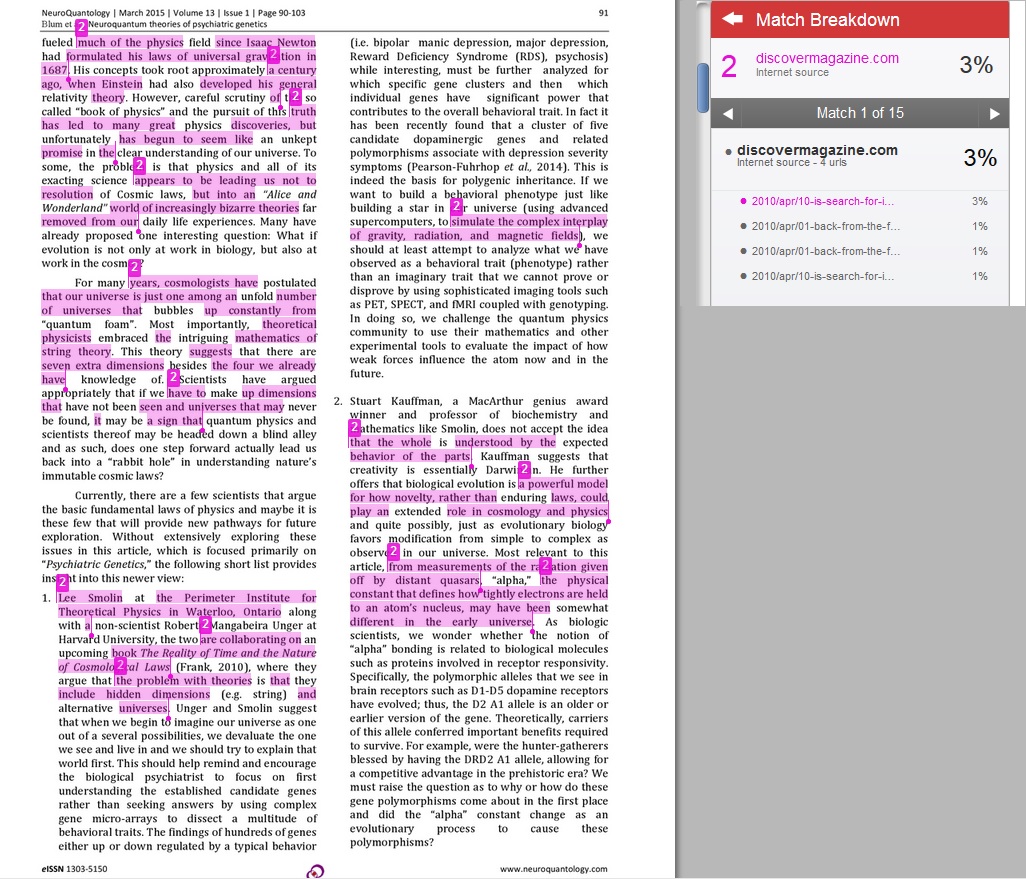 Back in 2015, I ran a three part post (1,2,3) on Dr Kenneth Blum and his claim to be able to treat what he calls “Reward Deficiency Syndrome” (RDS) with nutritional supplements.

Today my interest was drawn to a 2015 paper from Blum and colleagues, called Neuroquantum Theories of Psychiatric Genetics: Can Physical Forces Induce Epigenetic Influence on Future Genomes?.

In this paper, Blum et al. put forward some novel proposals about possible links between physics, epigenetics, and neuroscience. For instance, the authors ask whether an early human getting high after eating a root might have provided the human race with a genetic memory of intoxication:

It is quite possible that a cave man ingesting Mandragova officianarum (mandrake root) – a psychoactive substance with extreme aphrodisiacal powers – may have experienced an effect, which passed through “genetic memory” to his offspring and later generations. The experience, which was stored as a pleasant one, may or may not be experienced later in the recipient offspring. Nevertheless, suitable extragenetic stimuli may have triggered consciousness of that stored pleasurable experience for future generations. Given that extra-genetic triggering action (possibly certain chemicals, toxins, etc. having epigenetic effects), the recipient offspring may believe it to be a “fantasy” or “hallucination,” whereas in reality, the experience may have its origin as far back as reordered history, or even as far back as the first intake of mandrake root.

This theory reminds me of the work of another speculative historian of genetic memory, a certain L. Ron Hubbard. Blum et al.’s paper features several strange ideas such as this one.

To be fair, it does include some more sensible material, including expositions of pertinent topics in physics and philosophy. However, sadly, not all of this material is original. Yes, I’ve been plagiarism hunting again.

For instance, Blum et al. opens with a series of paragraphs about cosmology which appear to be rather closely based on a pair of articles by Adam Frank and Zeeya Merali – published in 2010 in this very Discover Magazine. Frank’s post is not cited at all; Merali’s is, but not in such a way as to make it clear that the text has been adapted from it. Here’s Turnitin’s analysis of the overlap between Blum et al. and Frank’s post:

Here’s a paragraph from Frank:

The implicit understanding is that nature’s rules are eternal, unbreakable, and all-controlling. As Albert Einstein once said, learning to read the laws of physics is like reading the mind of God. Such thinking has animated much of the enterprise of physics ever since Isaac Newton formulated his laws of universal gravitation in 1687: one set of laws for both the heavens and the earth. The idea took full root a century ago, when Einstein developed his general theory of relativity. If we work hard enough, he suggested, we will eventually find the elegant and simple rules that undergird the entire universe. Physicists have taken it as an article of faith that the bedrock laws are there to be discovered, if only we are clever enough in looking for them. The dogged pursuit of that ultimate truth has led to many great discoveries, but recently it has begun to seem like a promise unkept.

And here’s the corresponding text from Blum et al.:

It is implied that nature’s rules are eternal, unbreakable, and all controlling. Ideas like these have fueled much of the physics field since Isaac Newton had formulated his laws of universal gravitation in 1687. His concepts took root approximately a century ago, when Einstein had also developed his general relativity theory. However, careful scrutiny of the so called “book of physics” and the pursuit of this truth has led to many great physics discoveries, but unfortunately has begun to seem like an unkept promise in the clear understanding of our universe.

It’s perhaps not the worst case of plagiarism I’ve seen, but it’s still clear that Blum et al. reused text from Discover and edited it.

Maybe, though, we can’t hold the authors responsible for this copying. Perhaps they were merely unconsciously acting out an inherited genetic memory – a memory formed millions of years ago, the day one monkey first copied the behaviour of another?