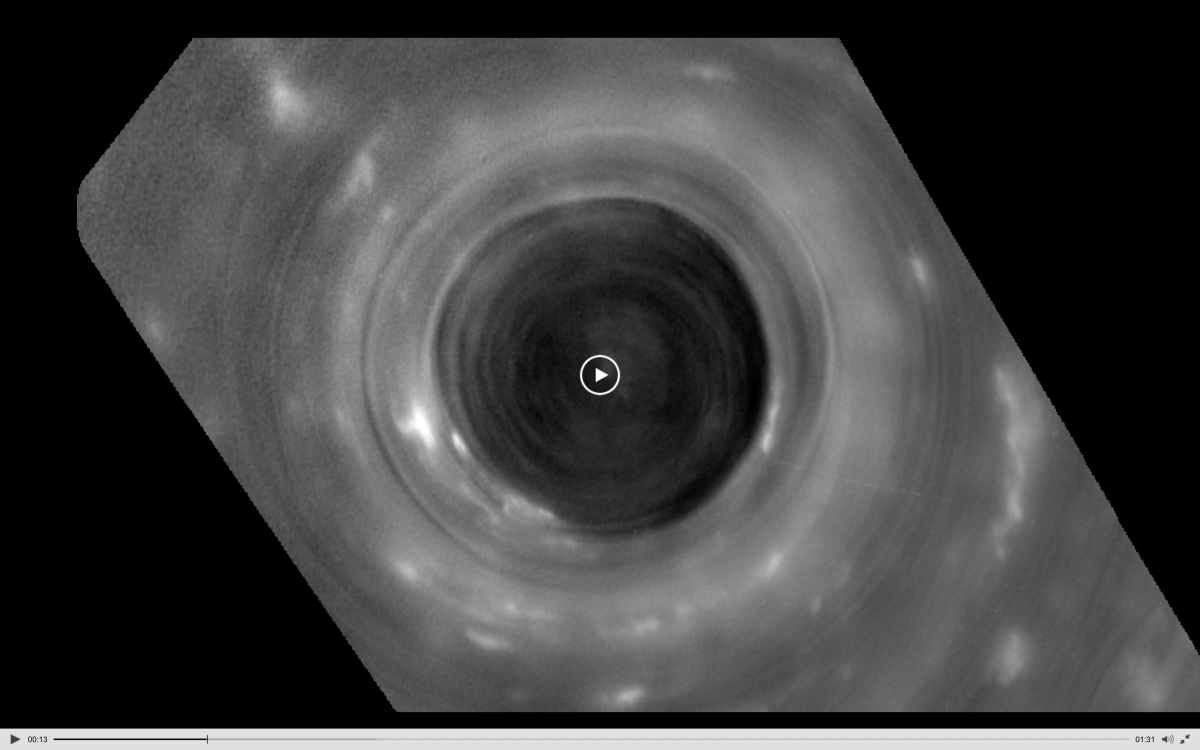 This video pans across a continuous long and narrow mosaic of 137 images of Saturn captured by NASA’s Cassini spacecraft when it dove between the giant gaseous planet and its rings on April 26th, 2017. Please click on the image to watch the video. As for why NASA scientists are calling this a “noodle,” read on… (Source: NASA/JPL-Caltech/Space Science Institute/Hampton University)

Yes, my tongue is poking into my cheek — but only part way.

NASA’s just come out with a Cassini spacecraft movie that takes us on a swooping journey low over Saturn’s cloud tops. And, in fact, the video pans across something the agency’s imaging wizards really are calling a “noodle.”

I happen to think it looks more like a nematode than a noodle, or maybe a hookworm. But you can decide for yourself: 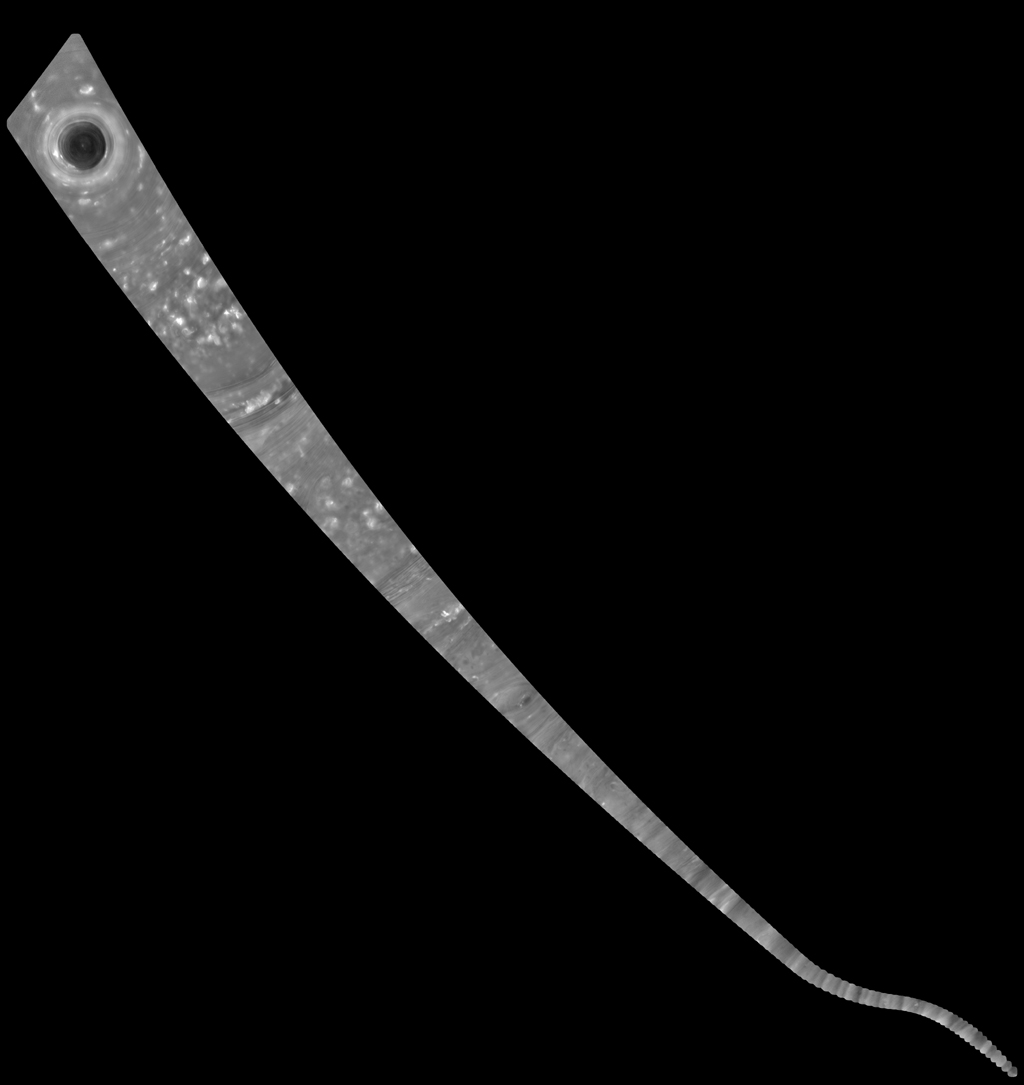 You’re looking at a mosaic of 137 images captured in the near-infrared by Cassini as it dove for the first time through the gap between Saturn and its rings on April 26th, 2017. This was the kick-off to the spacecraft’s “Grand Finale,” a series of 22 daring dives culminating on Sept. 15, 2017 when the spacecraft will plunge into Saturn’s atmosphere and burn up.

The video at the top of this post pans along the length of the mosaic, which the imaging scientists are calling a “noodle” because of its long, narrow shape.

NASA released an earlier video consisting of the same imagery. But in that video, each image made up a single movie frame. For this much improved version, scientists significantly increased the contrast and sharpness of each image, and then they combined them into the single, continuous mosaic over which the video pans.

The noodle covers an extremely long but narrow swath of Saturn’s atmosphere, from the north polar vortex to the boundary of the hexagon-shaped jet stream, to swirling and banded details at middle latitudes and beyond.

The first frame of the mosaic centers on Saturn’s north pole, according to NASA’s release.  The final frame shows a region at 18 degrees north latitude. During the dive, Cassini swooped from 45,000 miles above the clouds to as close as 3,200 miles. 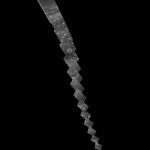 NASA scientists have also produced a second noodle mosaic, using images acquired by Cassini as it was making another plunge between the Saturnian cloud tops and rings on June 29, 2017. Click on the thumbnail at right to view it, and then click again to enlarge it to see detail in the cloud tops.

Those scientists are so busy making noodles that I’m wondering whether the next release from NASA will be a veritable plate of spaghetti.

In any case, I think they’re pretty tasty.

So is this completely different image — exquisitely beautiful in its simplicity: 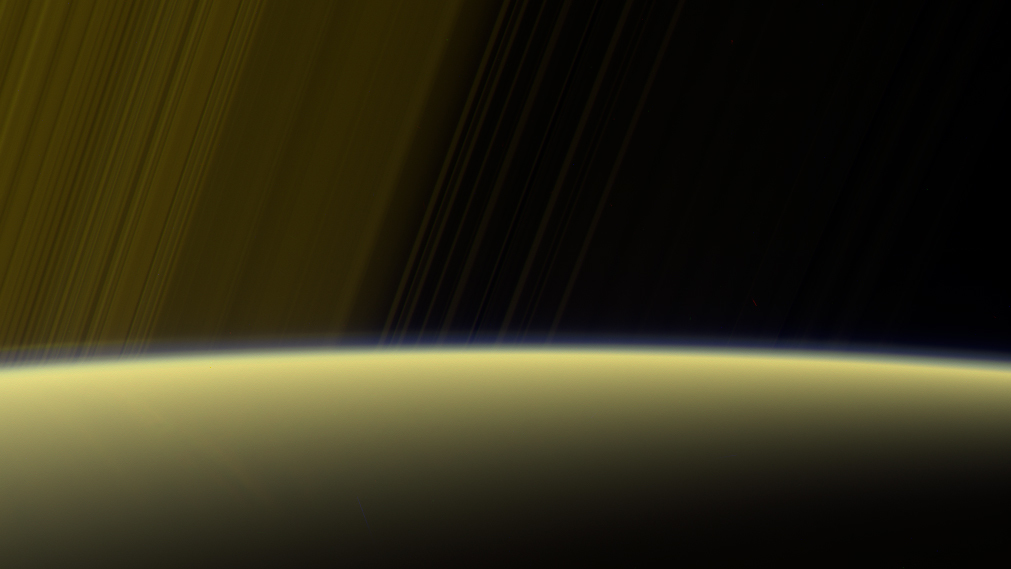 This false-color view from Cassini, acquired on July 16, 2017, at a distance of about 777,000 miles, shows Saturn’s sunlit horizon. A thin, bluish haze can be seen along the limb — the planet’s visual edge. (“Limb” comes from the Latin word limbus which means border.) Beyond are Saturn’s rings.

Cassini will pass through Saturn’s upper atmosphere during the final five orbits of the mission, before making a fateful plunge into Saturn on Sept. 15, 2017. The region through which the spacecraft will fly on those last orbits is well above the haze seen here, which is in Saturn’s stratosphere. In fact, even when Cassini plunges toward Saturn to meet its fate, contact with the spacecraft is expected to be lost before it reaches the depth of this haze.

Between now and then I’m sure we’re going to be treated to more spectacular imagery. So stay tuned.