Stemona tuberosa is well known for its use in Chinese traditional medicine, but itâ€™s got a much more intriguing claim to fame: Itâ€™s one of less than a handful of plants known to science that engages in vespicochoryâ€”that is, it gets predatory wasps to disperse its seeds. It was a strange enough discovery that Gao Chen and his colleagues at the Chinese Academy of Sciences in Beijing wondered how the plants manage to convince the hornets to haul their offspring around. All it takes is the right scent, the team discovered: parts of the plant smell and taste like the insects the hornets normally hunt.

Lots of plants convince wasp relativesâ€”particularly antsâ€”to move their young around. In fact, ant-mediated seed dispersal or mymecochory has evolved at least 100 times in flowering plants and is used by more than 11,000 species. And until Chen and his colleagues took a closer look, thatâ€™s how it was thought Stemona tuberosa seeds were dispersed, too. But when Chen and his colleagues decided to study the plant in greater detail, they saw wasps carrying away seeds instead.

They soon realized the predators â€œpounceâ€� on the protected seeds of the plant (called diaspores)â€”as â€œif they were trying to â€˜killâ€™ them by biting, much like their behavior when attacking preyâ€œ. Once a wasp rips off a seed, it drags it quite farâ€”an average of over 110 meters away. Often, the helpful hornet eventually stops to rip off most of a fleshy external part called the elasiosomeâ€”usually considered the bait for seed-dispersing antsâ€”and takes it with them to their nest (presumably to feed their young). That leaves the diaspore with its seed behind, where ants can discover it and take it to their nestsâ€”putting the seeds exactly where they need to be to germinate.

Watch as the wasp rips a seed and carries it off. From Movie S1, Gao et al. 2017; used with permission from Gao Chen

And this wasnâ€™t a rare thing. In their 2017 study, hornets were the only animals that actually took diaspores from the plant and moved them around. They saw ants visit a couple of times, but they couldnâ€™t tear anything off like their bigger cousins could. And that, combined with the relatively short distance the ants moved diaspores when they did find themâ€”a little over a meter and a half on averageâ€”suggests their role in seed dispersion is secondary, and perhaps mostly helpful because they drag the seeds underground where theyâ€™re safe from seed predators.

But all that doesnâ€™t explain why the species of hornets seen acting as seed dispersers rip off and carry the seed capsules away in the first place. All are predatory species that feed their young other insects, not plant parts. So the research team decided to look a little closer at the fleshy elasiosomes the wasps seemed so interested in.

The researchers collected Asian hornet nests (Vespa velutina) and used them in a series of choice experiments. First, they let them choose between whole diaspores, unprotected seeds, and just those fleshy elasiosomes. They also tagged hornets that attacked the seed capsules to more closely monitor their behavior. But to really look at what smells might be attracting the hornets, they took empty diaspore capsules and made them â€˜odorlessâ€™ in the lab by stripping potential scents with dichloromethane. Then, they soaked the empty capsules in scent extracts from different parts of the plant and seeds. They also analyzed those scent extracts to determine what they were comprised of, and tested the wasps with synthetic versions. Their results were published this year in the journal New Phytologist.

When offered whole diaspores, elasiosomes, or seeds, the wasps took no interest in the unprotected seedsâ€”which makes sense, since theyâ€™re unable to break through the tough diaspore capsule anyway. But they readily attacked and carried off the whole capsule or just the fleshy bitâ€”suggesting that meaty elasiosome really is the part theyâ€™re after. And that was confirmed in the scent choice experiments. The wasps were strongly attracted to Eau de Elasiosome, and in particular, the abundant hydrocarbons the researchers detected in it, like pentacosane, tentacosane, tetracosane, and tricosane. Thatâ€™s interesting because these compounds arenâ€™t thought to disperse far in the air, begging the question of what draws the wasps close enough to smell them to begin with. The team thinks the bunches of diaspores might look enough like the nest of prey like bees to entice the wasps, but that remains to be thoroughly examined.

Pentacosane, one of the hydrocarbon compounds found in the elasiosomes. Figure: Wikimedia Commons

Then the team dug even deeper, looking at gene expression in the wasps, and found two chemical sensory genesâ€”VvelCSP1 and VvelCSP2â€”which were highly expressed in their antennae. Further tests confirmed these proteins bind with the hydrocarbons in the elasiosome extracts, suggesting theyâ€™re used to detect the attractive smell.

Previous studies had shown that proteins and other elasiosome components are similar to the â€œbloodâ€� (hemolymph) of ants, so the wasps likely smell the tasty hydrocarbons, take a bite, and believe theyâ€™ve found a nice insect meal for their young. And their efforts arenâ€™t unrewardedâ€”Chen and his colleagues found that the elasiosome could actually be nutritious for the young wasps. So, while the plant does trick the wasps into thinking theyâ€™ve found a tasty insect, the ruse isnâ€™t harmfulâ€”itâ€™s a great example of mutualism. 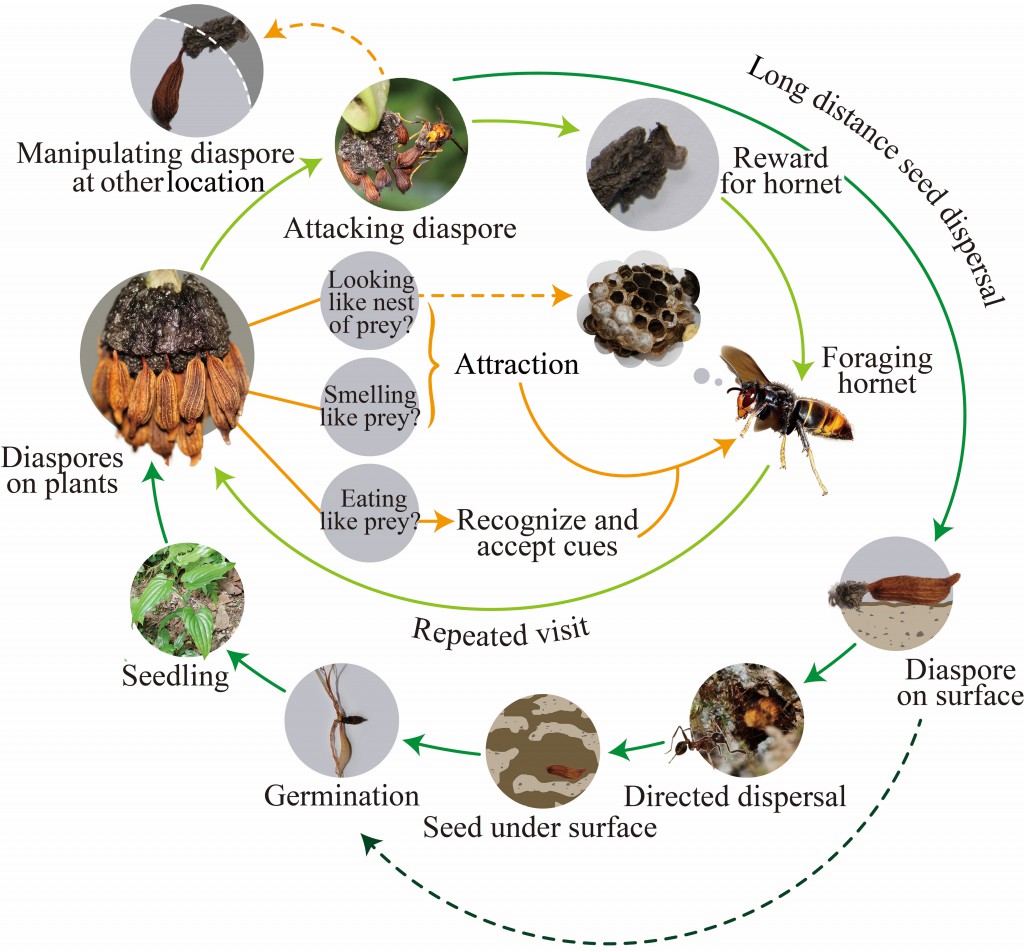 Since this fascinating win-win went undiscovered for so long despite the everyday use of Stemona tuberosa in traditional medicine, Chen and his colleagues think there may be a lot more plants out there that use wasps to disperse their seeds. And other work of theirs, which is as of yet unpublished, has found that several other plant families produce similar compounds that could be being used as lures. â€œWe suggest that â€˜smelling like preyâ€™ may be not uncommon and may be an underestimated tactic in the dispersal of seeds in other mymecochorous plants,â€� they concluded.

And if theyâ€™re right, that means that our understanding of the ecology of these plants and the wasps they recruit as seed dispersers is sorely lacking. We donâ€™t know how important a food source these elasiosomes are for the waspsâ€™ young, for example, or what impacts the loss of seed-dispersing wasps might have on individual species or entire ecosystems. Weâ€™ve been hearing for years about the plight of bees, but perhaps we should be paying more attention to their oft-maligned, sleeker relatives. Weâ€™re only just beginning to understand what a world without wasps would look like, and it isnâ€™t pretty.