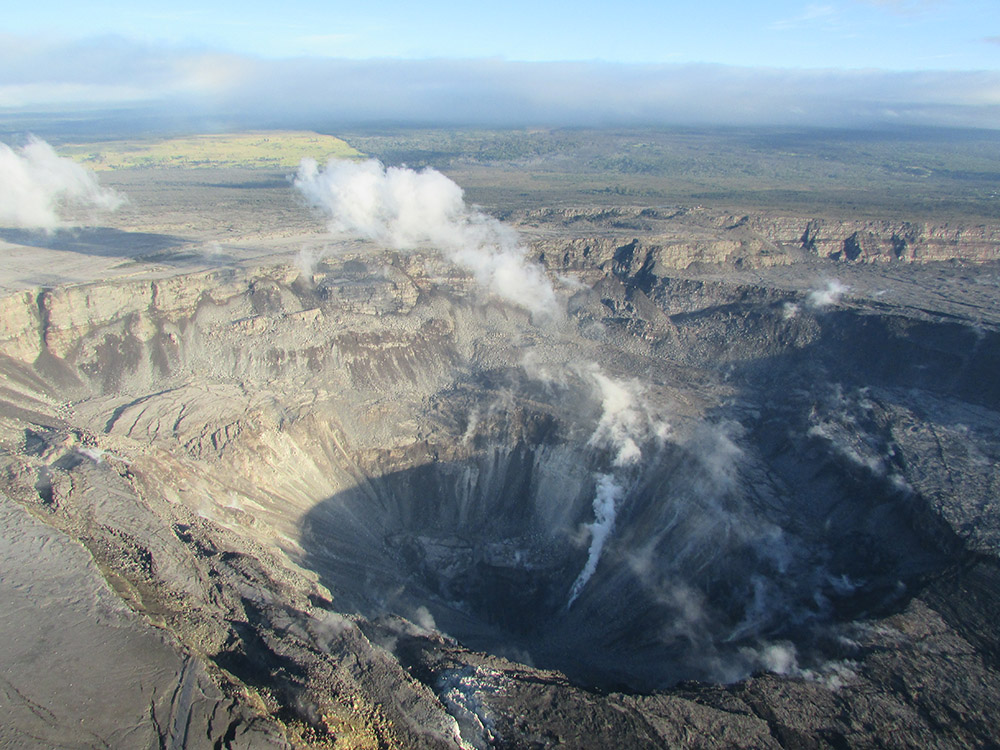 The eruption at KÃ­lauea has almost reached 3 months and in a sense, this eruption was a two-for-the-price of one. Most of the attention has been on the lava flows on the lower East Rift zone and rightly so. Those lava flows are the largest eruption in historic times at the Hawaiian volcano and have destroyed hundreds of homes, along with permanently altering parts of the coast. However, even after the really big explosions died down at the summit, the big changes there have continued.

Every 10-20 hours (or so), the summit experiences another explosion that releases about the same energy has an ~M5 earthquake would release. These explosions â€” 58 so far â€” are all happening because the summit is still subsiding â€” sinking into the ground. This slow collapse to form another caldera inside the pre-existing Halemaâ€™umaâ€™u caldera has been going since the lower East Rift zone started and is likely cause by all that magma leaving the summit, pulling support out from the summit. Even between explosions, the summit area experiences dozens of small earthquakes per hour. As long as the lower East Rift zone eruption continues, we might expect the collapse of the summit to continue (and you can watch it on the HVO webcams).

So, what has changed? This collapse started around the lava lake that used to reside in the Halemaâ€™umaâ€™u Crater. That lava lake formed in 2008 and last almost exactly a decade. Since the lava lake drained in May, the Crater has collapsed, taking some of the larger caldera floor with it.

Check out this image of the KÄ«lauea summit area in 2003 (below).

This was before the lava lake formed, but much else in the summit area was present. Iâ€™ve marked some important sights, like HVO, the road and the Halemaâ€™umaâ€™u Crater inside the Caldera. This is likely what the summit looked like for about half a century (not including some of the dark, younger lava flows in the caldera floor). 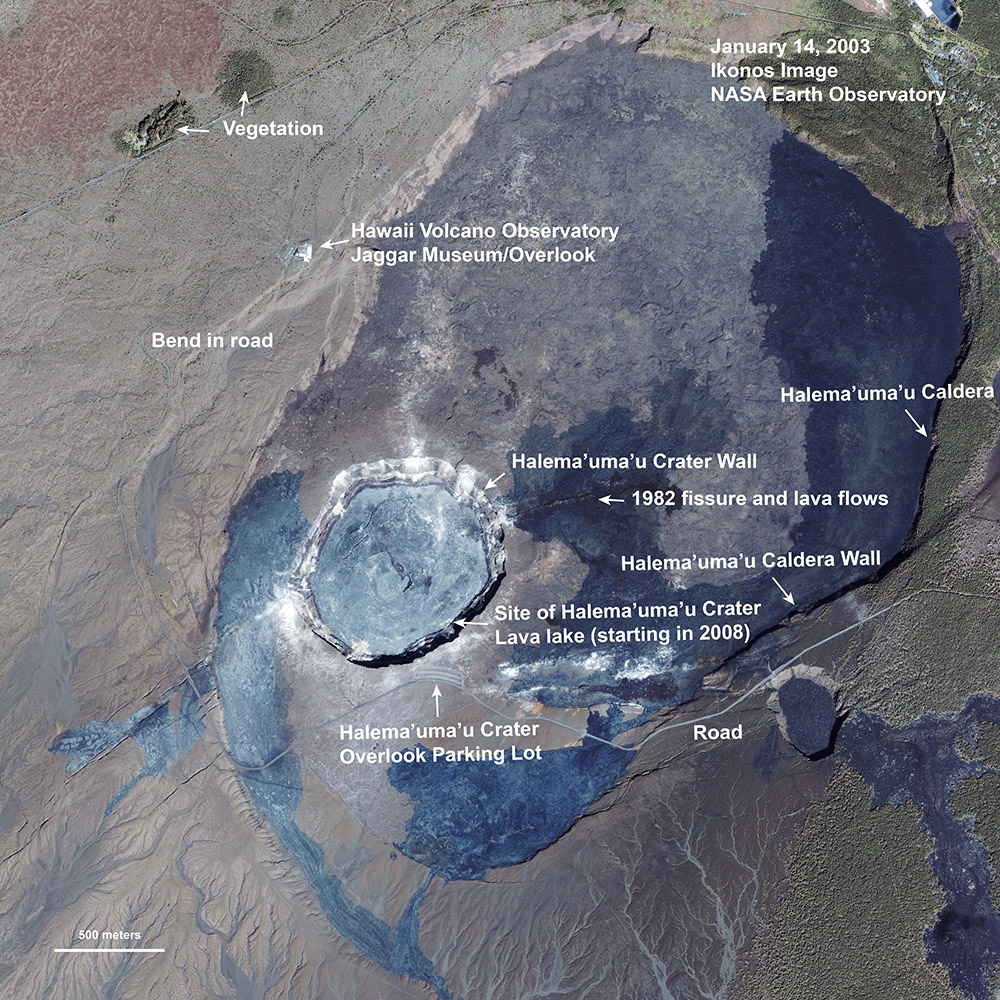 Now, check out the image of then KÄ«lauea Summit seen only a few days ago, on July 25, 2018 (below). It is almost unrecognizable. Iâ€™ve marked some of the same spots as on the 2003 image, but two big things are different. First off, the giant collapse feature in the middle! That new caldera has consumed much of the Halemaâ€™umaâ€™u Crater and is now hundreds of meters deep (see top image) and a few kilometers across. In the upper right side of the image are fractures that have formed as the summit subsides. You might also notice that the hold Overlook parking lot at the bottom of the image is gone, as is some of the old road that took tourists around the caldera prior to 2008. There are large slump blocks (chucks of the old caldera wall) that are slowly sliding into the new collapse feature. 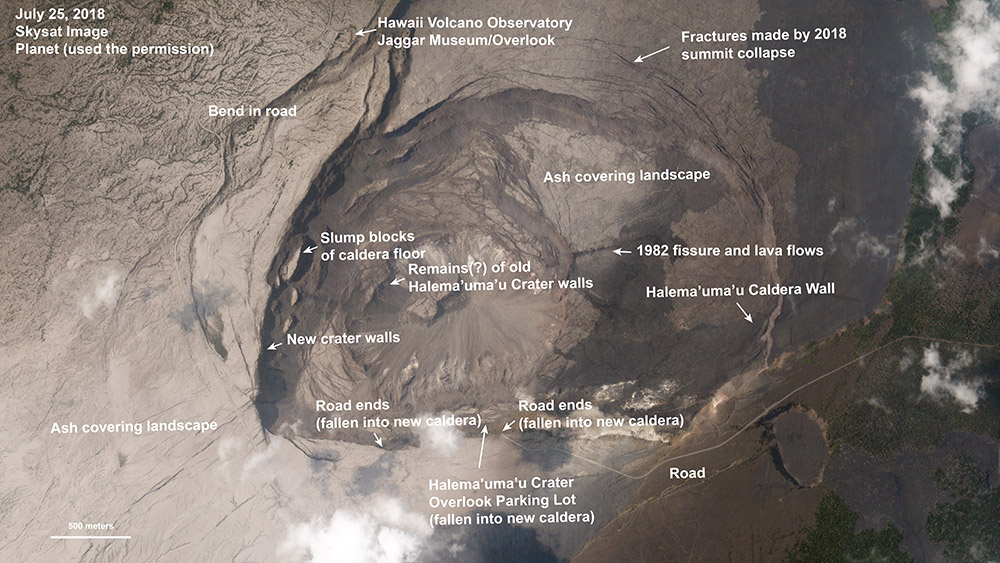 The second big change is the ash all over the landscape at the KÄ«lauea summit. The light grey material is mostly found on the left side (west side) of the image because the prevailing winds send it that way. The parking lot and buildings at HVO are all covered with volcanic ash and debris. This ash is loose, so rains will move it â€” this is a more serious concern at volcanoes that erupt lots of ash, but might be an issue around KÄ«lauea as well.

It still isnâ€™t clear how long this eruption will last â€” however, there are signs it could be slowing. The explosions at the summit are getting further apart and the lava flows from fissure 8 are less vigorous. A recent summit collapse on July 26 did cause another surge of lava at Fissure 8, suggesting that lava is being â€œsqueezedâ€� out of the lower East Rift zone as the summit continues to collapse. Another collapse followed on July 28, so the slowing that might have been happening earlier could be just a blip. Whatever the future holds, KÄ«lauea is a very different place than it was when 2018 opened.