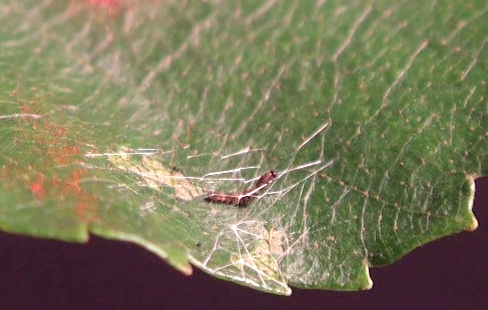 Newly hatched caterpillars look helpless: they’re teensy, soft and juicy, with no parent around for protection. But certain young insects, the masked birch caterpillars, are more capable than they seem. They gather in groups to keep themselves safe. To form those groups, they use a previously undiscovered language of buzzes, vibrations, head banging and butt scraping.

The species, Drepana arcuata, passes through five caterpillar life stages (called instars) on its way to becoming a little beige moth with hooked wingtips. As a caterpillar it resides, and munches, on the leaves of birch and alder trees across North America. The older caterpillars live alone. When they encounter each other, they may fight over shelters they’ve built from silk; during these disputes, they signal to each other by vibrating.

Younger masked birch caterpillars, on the other hand, are friendly. They live in groups during their first and second instars. This is probably so they can work together to build silk shelters, says Jayne Yack, a biology professor at Carleton University in Ottawa, Ontario.

Scientists have also observed young caterpillars making vibration signals. But unlike the older caterpillars, they send out these signals when they’re all alone. “It was puzzling to us why early instars signaled at all,” Yack says, “and what they were talking about.”

Yack, along with graduate student Chanchal Yadav and others, gathered up newly hatched caterpillars to learn more. They kept the tiny insects—just 1 to 2 millimeters long—on fresh birch cuttings in glass jars, and conducted a series of experiments on them, gently moving the caterpillars from place to place with a paintbrush.

First, they put one caterpillar onto each of five or six leaves on a birch twig. Over 30 trials, they saw that the insects began to find each other within half an hour. Within five hours, they’d assembled in groups of two to six caterpillars. In another experiment, the researchers cut birch leaves into “Y” shapes. They placed three caterpillars on one arm of the Y, and a solitary caterpillar at the base. Nearly every time, the lone caterpillar walked onto the arm of the leaf where the other caterpillars were.

Clearly the young insects were seeking each other out. To observe the signals they might be using, the researchers made video recordings of the caterpillars. They also measured vibrations using a technique called laser doppler vibrometry: they stuck a little circle of reflective tape to a leaf that caterpillars were on, shone a laser at the disk, and measured shifts in the frequency of the light bouncing back to detect very small vibrations in the leaf.

Solitary caterpillars always made vibration signals before being approached by another caterpillar. The approaching caterpillars didn’t make as many signals. And the more often a caterpillar signaled, the sooner it was joined by others.

It would be hard for these insects to find each other by sight, the researchers say, given their simple eyes and the long distances—up to 420 times their body lengths—they travel to reach each other. Some caterpillars communicate by leaving chemical trails, but that doesn’t seem to be the case here either. When the researchers repeated the Y experiment by letting caterpillars crawl all over one arm of the Y and then removing them, the lone caterpillar didn’t show any preference for that side of the leaf. So smell probably isn’t the secret to forming caterpillar clubs.

Instead, the researchers think caterpillars use vibrations to call out to one another. They may be announcing that there’s food and shelter where they are. Yack says no one has seen this kind of signaling in caterpillars before: “Discovering that these tiny guys are communicating, and with such complex vibration patterns, was really intriguing.”