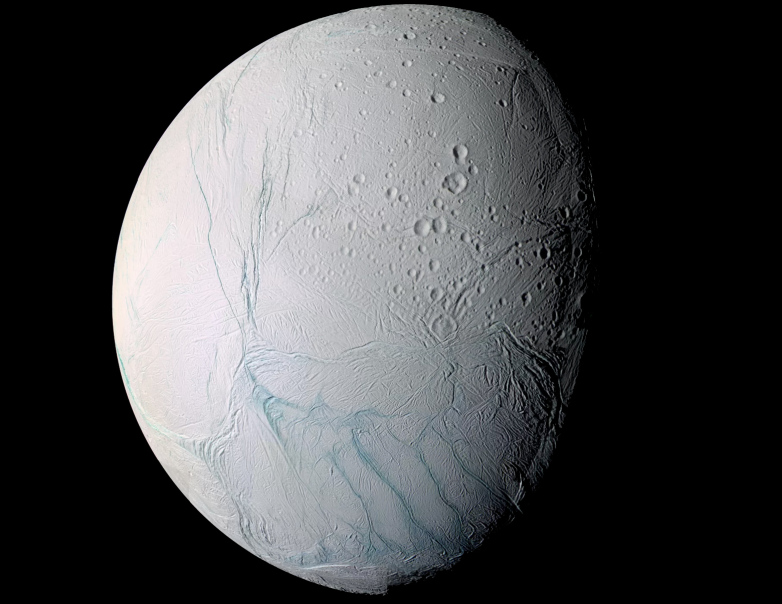 A new analysis of data from NASAâ€™s Cassini spacecraft indicates the presence of large organic molecules on Enceladus, something not found on the moon before.

Using two instruments aboard the now-perished orbiter, an international team of researchers looked at molecules erupting with plumes of water vapor streaming from beneath Enceladusâ€™ surface. Though similar experiments have been performed in the past, this time, the researchers found organic molecules much bigger, and thus more complex, than any found before.

The results appeared Wednesday in Nature.

The international team used data from both a mass spectrometer aboard Cassini, which â€œtastesâ€� the plumeâ€™s composition, as well as the Cosmic Dust Analyzer (CDA), which uses the impacts of molecules against a sensor to determine their mass. About three percent of the molecules they sampled approached the limits of the sensorâ€™s detection range at 200 atomic mass units, or more than 10 times heavier than methane.

Though researchers have found organic molecules elsewhere in the solar system, the sheer size of those on Enceladus is surprising. Combined with the moonâ€™s other intriguing characteristics â€” a salty liquid water ocean, geysers emanating from beneath the surface and indications of hydrothermal vents â€” Enceladus continues to look like the most tantalizing place in our solar system to look for extraterrestrial life.

The presence of large, complex organic molecules is something we would expect to see if life was present. But, itâ€™s also far from evidence of actual life. In chemistry, organics are simply molecules that life uses, usually including carbon and often with large ring or chain structures incorporating oxygen, nitrogen and hydrogen. Organic molecules can come from non-organic processes too, and the researchers suggest that those on Enceladus could simply have either been incorporated into the moon since its formation, or come about as a result of reactions within the planetâ€™s rocky core â€” perhaps assisted by geothermal activity.

We canâ€™t rule out the possibility of life on Enceladus, either. And the researchers note that some of the macromolecules they found seem similar to some created on Earth by the decay of organic matter. As always, though, there are totally abiotic pathways that could create these molecules as well.

Further explorations of Enceladus will have to wait, unfortunately. The Cassini spacecraft crashed into Saturn last year and, despite efforts to send a follow-up mission to Enceladus, none are currently planned. The trove of data from Cassini is all we have to work with at the moment. But researchers are still combing through everything the spacecraft sent back â€” perhaps new findings are still to come.