Body-snatching, not socialising, drove the evolution of bigger-brained insects 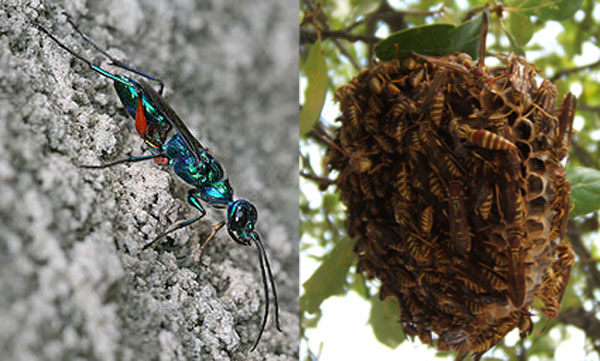 Some insects, such as ants, lead famously social lives, with massive colonies of individuals, cooperating for a common good. These insects also tend to have unusually large brains. For over 150 years, this link has been tacitly taken as support for the idea that social animals need extra smarts to keep track of all their many relationships. But Sarah Farris from West Virginia University and Susanne Schulmeister from the American Museum of Natural History aren’t convinced.

After comparing a wide range of species, they think that the large brains of these insect collectives have little to do with their cooperative societies.  Instead, their enlarged brains may have been driven by a far grislier habit: body-snatching.

The link between brain and group size was first documented by a French biologist called Felix Dujardin. He is credited for discovering mushroom bodies, a pair of structures in insect brains that control a variety of higher mental abilities: learning, memory, processing smell, attention and more. They are the insect equivalent of our own cerebral cortex, which also governs our most vaunted mental skills. Indeed, both the mushroom bodies and the cerebral cortex may have evolved from the same ancestral structure.

In 1850, Dujardin noted that the largest mushroom bodies could be found in the hymenopterans, the group that includes ants, bees and wasps. The mushroom bodies of the group’s stinging members (the aculeates) are particularly big, and loaded with elaborate folds and compartments. The fact that these species are also the ones that form large colonies didn’t go unnoticed by Dujardin, especially since it seemed to fit nicely with the so-called “social brain hypothesis.

This idea has mostly been applied to primates, and it says that a social life was one of the big drivers behind the evolution of greater brainpower. It has never really been tested properly in insects, and Farris and Schulmeister wanted to change that.

They noted that there are many hymenopterans that live alone instead of in colonies. If the social brain hypothesis was correct, these species should have smaller mushroom bodies than their sociable cousins.

They don’t. It’s true that among the sociable aculeates, those that live in more complex societies have larger mushroom bodies. However, these structures aren’t very different from those of loner species; only minor differences separate them. In this group, a social lifestyle evolved at least four times and it seems that before any of this happened, the group’s common ancestor already had sizeable mushroom bodies.

Using their broad survey of insect brains, Farris and Schulmeister found that the mushroom bodies of the hymenopterans started becoming big at a far earlier point in their history. The driving force wasn’t the move from solitary to social, but from plant-eater to parasite.

If you look at the hymenopteran family tree, you’ll see that the cooperative ants and honeybees that we’re most familiar are a small group of socialites, embedded within a horde of parasites. Legions of hymenopteran species make a living as specialised body-snatchers, which lay their eggs in the bodies of other animals, turning them into living incubators for their young.

These ‘parasitoids’ evolved from plant-eating ancestors and according to Farris and Schulmeister, it was at this point that their mushroom bodies started getting bigger. They grew in size, became more complex in structure and started receiving direct signals from the part of the brain that processes images. All of this happened at the start of the Jurassic period, and around 90 million years before the first social insects came on the scene.

Why should a parasite need a bigger brain? It might have something to do with the challenges involved in finding a host for one’s eggs. Parasites need to learn how to track down their victims, combining information about their appearance, smell and other telltale cues. They also need a good memory for places and locations; some track their hosts over several days while others will lie in ambush over targeted burrows. Like every other insect, they must be able to find homes, food and mates, but they have the extra challenge of finding bodies for their eggs; and their victims might be scattered all over the place.

The mushroom bodies underlie all of these abilities; it’s reasonable to think that as they became larger, their owners became better at finding bodies. There’s some evidence that the same needs have driven the evolution of other insect brains. For example, the parasitic bee flies have larger mushroom bodies than other types of fly that don’t share their gruesome habits.

If Farris and Schulmeister are correct, a social existence didn’t drive the rise of larger mushroom bodies. However, it might have been the other way round. Social ants and wasps send out workers from a central location to forage for food. That requires excellent spatial learning, so that the forager can remember the location of both food and nest and excellent spatial learning seems to require large mushroom bodies. You could argue that insects with such sizeable structures were pre-adapted to form societies.

More on social insects and parasitoids: