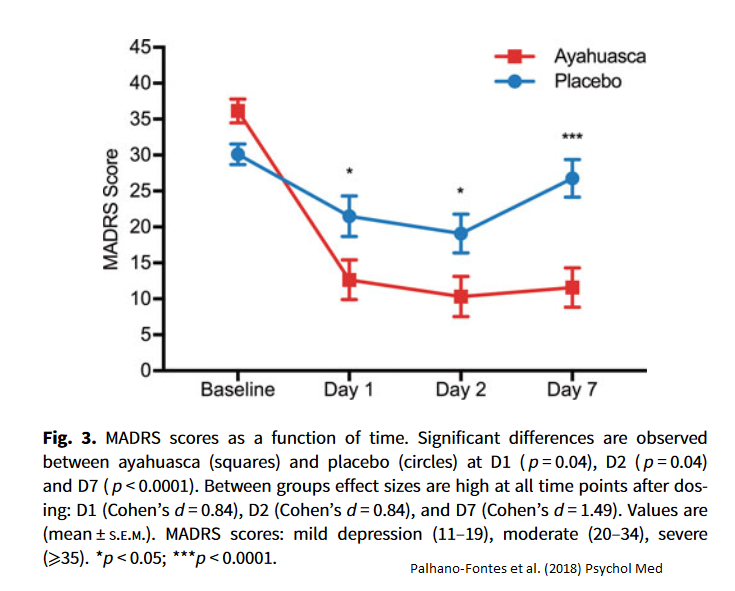 A traditional Amazonian psychedelic brew is an effective and rapid-acting antidepressant, according to a paper just published. But the new study revives some long-standing questions.

Ayahuasca is a mixture of herbs, traditionally used for spiritual and therapeutic purposes. The main active ingredients are N,N-DMT, a potent psychedelic, and several molecules that inhibit the enzyme MAO. The MAO inhibitors serve to prevent the N,N-DMT from being broken down by the digestive system, allowing it to enter the bloodstream and cause hallucinations and other alterations of consciousness.

In the present study, Brazilian researchers Fernanda Palhano-Fontes and colleagues gave ayahuasca to 14 patients with chronic depression who hadnâ€™t responded to other antidepressants. Another 15 depressed patients received a placebo drink.

The ayahuasca group showed a strong improvement in their depressive symptoms, which persisted for at least a week (the last assessment was on day 7). The patients given placebo also improved but this effect was modest and short-lived. This graph shows the MADRS depression scale scores during the trial (lower is better):

Palhano-Fontes et al. conclude that ayahuasca could be a safe and effective antidepressant. No serious side effects occured, although â€œthe ayahuasca session was not necessarily a pleasant experienceâ€�:

In fact, some patients reported the opposite, as the experience was accompanied by much psychological distress. Most patients reported nausea, and about 57% have vomited, although vomiting is traditionally not considered a side effect of ayahuasca, but rather part of a purging process.

In my view, this is a promising study, and well-designed. For instance, Palhano-Fontes et al. went to some lengths to make the placebo brew look, taste and smell like the real thing. They even added zinc sulfate to make the placebo cause gastrointestinal distress, like the ayahuasca (although no-one on placebo vomited.)

However â€“ and regular readers can probably guess what Iâ€™m going to say at this point â€“ I think itâ€™s possible that ayahuascaâ€™s antidepressant effects were themselves a kind of placebo response. This is because, as expected, the ayahuasca caused powerful psychedelic effects, such as â€˜altered perceptionâ€™ and â€˜transcedenceâ€™. Such potent subjective experiences could lead patients to have confidence in the treatment and thus drive placebo effects, especially in combination with the expectation that ayahuasca will be beneficial.

Now, in the case of ayahuasca, this â€˜psychologicalâ€™ interpretation of the antidepressant effect is not necessarily a problem. I think most people (including the traditional ayahuasca users) already assume that the psychedelic experience is part of the therapeutic process.

However, letâ€™s consider another mind-altering drug which is being researched as a rapid-acting antidepressant: ketamine. Ketamine, much like ayahuasca, produces powerful antidepressant effects when compared to placebo, and in my view this may well be because of psychological, â€˜placebo-likeâ€™ processes. Ketamine and ayahuasca produce very different experiences, but in both cases the subjective effects are intense, profound and unmistakable.

The difference between ketamine and ayahuasca is that many ketamine researchers believe that the antidepressant properties of ketamine represent a direct pharmacological effect, mediated by the drugâ€™s effect on glutamate signalling; on this view, the subjective effects of ketamine are a mere epiphenomenon.

Palhano-Fontes et al. do discuss possible specific pharmacological pathways that might underly the antidepressant effects of ayahuasca (e.g. sigma-1 receptors), but they also acknowledge that

Visions are common during the effects of ayahuasca, and are most frequent with the eyes closedâ€¦ It has been suggested that visions may play an important role in the therapeutic effect of ayahuasca, as they may help bringing clarity to introspective events

I wonder if almost any drug that produces psychedelic or other profound subjective effects would perform as well as ketamine or ayahuasca. It would be interesting to carry out a comparative trial with (say) ketamine, LSD, mescaline, ayahuasca and a few others. I would predict that, regardless of the specific pharmacology of each drug, the intensity of subjective effects would be the best predictor of outcome.