Australia&#039;s Home to Some of the Largest Dinosaur Footprints Ever Found 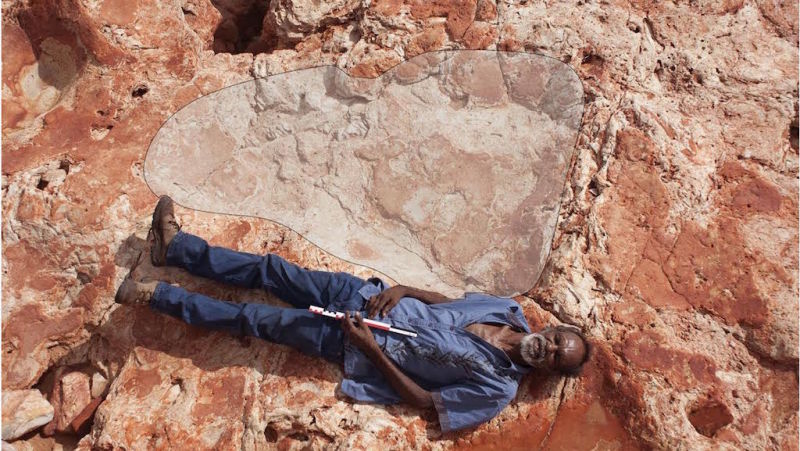 One of the larger sauropod footprints. The border of the imprint has been digitally outlined. (Credit: Steven Salisbury)

Their physical remains may be absent, but dinosaurs left unmistakable impressions in the landscape of Western Australia.

A new analysis of dinosaur footprints from the Broome Sandstone region, called “Australia’s Jurassic Park,” has revealed that thousands of imprints dotting the coastal landscape belong to at least 21 different dinosaur species. Dating to the early Cretaceous, the prints are the only evidence left behind by dinosaurs in the area, and they are among the largest footprints ever found.

Following In the Footsteps of Giants

Australia’s coastline, 130 million years ago, was teeming with life. Long-necked sauropods, predatory theropods and heavily armored stegosaurs were but a few of the diverse cast of dinosaurs that traversed the tidal plains and shallow lagoons in the region. Their feet sunk deep into the soft soil, leaving imprints that would harden into sandstone and endure. Now, researchers from the University of Queensland and James Cook University are retracing the footsteps of these dinosaurs to learn more about their lives and assemble a fuller picture of the Australian Cretaceous.

This latest round of research is the result of five years of fieldwork following a proposed liquid natural gas processing precinct in the Walmadany region where many of the prints are found. That proposal was ultimately withdrawn after meeting with heavy pushback from tribal leaders and renewed interest in the paleontological and environmental value of the area. 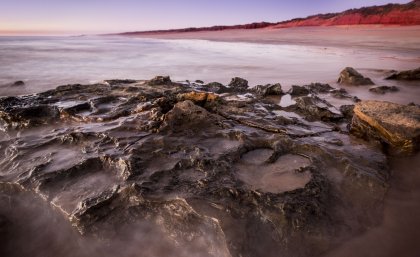 While researchers are still uncovering the secrets of these footprints, they have been an essential part of Aboriginal culture for countless generations. To the Goolarabooloo people of western Australia, the dinosaur footprints are the protean footsteps of a divine being called the Emu Man, a foundational figure in their folklore.

The hardened footprints are hardly a new discovery for modern scientists either — they’ve drawn the attention of amateurs and paleontologists for decades. This latest work is the most comprehensive study to date, and adds at least five types of dinosaur to the Australian Cretaceous-era census. The presence of these fossilized footsteps is a fortunate break for researchers, as few fossils have been discovered in the region.

“This area preserves one of the most diverse dinoasaur-track faunas anywhere in the world. Nowhere else has as many different types of dinosaurs represented by tracks than Walmadany does,” says lead author Steve Salisbury.

In total, researchers now know that five types of theropod, six types of sauropod, four types of ornithopod and six types of armored dinosaur roamed the coasts, and spotted the only evidence of a stegosaurus in the region to date. In addition, one of the imprints discovered is one of the most massive in the world — a sauropod footprint measuring five feet, nine inches across, big enough for an average-sized man to lie down in. The results are published in the Society of Vertebrate Paleontology.

Around 150 of the tracks can be conclusively identified while the rest are too vague to be labeled at the moment. In some areas, there was simply too much traffic for individual prints to stand out — the relentless drum of dinosaur footsteps wore troughs and basins into the ground, leaving a roadmap of their movements. Other tracks do stand out much more distinctly, however. There are several examples of three-toed theropods, as well as distinctive “onion-ring” impressions left by round-footed sauropods as their weight squished sediment outwards. The tracks can sometimes be difficult to pick out, resembling little more than weathered craters, and there are undoubtedly more to find.

Many of the footprints were found along the coast, making identification and analysis difficult. The waves regularly wash over the rocks, restricting the researchers’ access to periods of low tide only. To aid their research, they used drones to shoulder much of the mapping and imaging workload, ultimately creating a detailed digital rendering of the coastline for use in future work.