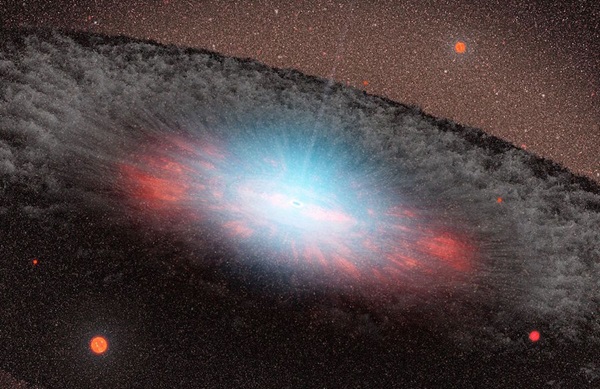 This artist’s concept depicts a supermassive black hole surrounded by a dense disk of gas and dust in the center of a galaxy. (Credit:
NASA/JPL-Caltech)

Just last year, three American physicists shared the Nobel Prize in Physics for their role in the historic detection of gravitational waves. The signals came from cosmic ripples in space-time created by some of the most violent events in the universe: colliding black holes.

So, how did these relatively small black holes bulk up before merging?

In the past, scientists suspected these black holes grew larger because they started their lives as giant stars with very few metals — or elements besides hydrogen and helium. Since low-metallicity stars produce weak solar winds, they keep most of their mass before collapsing into black holes.

But according to a new study published in The Astrophysical Journal Letters, there may be more than one way to make a black hole balloon in size — and it doesn’t involve a low-metal diet.

Instead, the authors outline a way that average stellar-mass black hole can grow by gobbling up the material circling a galaxy’s supermassive black hole. Furthermore, this new mechanism also may predict a fresh source of gravitational waves. 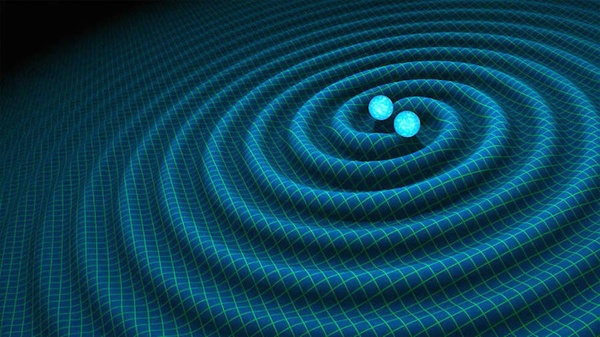 Gravitational waves are produced by the inspiral and eventual merger of two extremely dense objects, such as black holes or neutron stars. This creates ripples in the fabric of space-time that propagate outward at the speed of light. (Credit: R. Hurt/Caltech-JPL)

Astronomers know that the majority of large galaxies house supermassive black holes in their cores. Many of these black holes lie dormant for most of their lives, accreting little matter and producing little light.

However, some supermassive black holes are surrounded by a dense disk of gas and dust that harshly grinds together as it spins inward toward the supermassive black hole itself. This spinning disk generates incredible amounts of friction, which causes the material inside it to glow brightly. If these radiant disks are especially bright, astronomers refer to them as active galactic nuclei, or AGN.

Just outside these chaotic disks, however, are numerous stars — many of which will eventually evolve into stellar-mass black holes.

According to the new study, a pair of these nearby stellar-mass black holes can easily become trapped within the AGN’s disk. And when this happens, the black holes feed on the available matter as they spiral ever closer, growing from around seven solar masses to more than 20 solar masses before they eventually merge.

The gravitational-wave signal generated by such a merger would indicate that the two black holes involved were around 20 solar masses, even though they both initially started much smaller.

One interesting offshoot of this newly proposed method for forming supersized stellar-mass black holes is that their environment can often cause them to synchronize their spin axes, like two tops spinning in tandem. According to the study, such systems release about 10 percent of their energy as gravitational waves when they do finally merge. That’s as much as three times more gravitational-wave energy than would be released if the black holes were randomly oriented, which means these mergers are likely detectable with current technology, such as the Laser Interferometer Gravitational-wave Observatory (LIGO).
The authors also say these black holes would likely emit large amounts of X-rays, gamma rays, or even radio waves. Those wavelengths could provide an electromagnetic counterpart to a gravitational-wave signal, revealing important details that would otherwise remain hidden.

Last year, astronomers managed to do just this when they observed both gravitational waves and gamma rays from the merger of two neutron stars. At the time, astronomer Josh Simon of Carnegie Observatories said of the neutron star detection, “There are things you can discover with gravitational waves that you could never see with electromagnetic light, and vice versa. Having that combination should provide us with insights into these extreme objects.”

So, is this newly proposed method for forming supersized stellar-mass black holes the explanation for LIGO’s extra-large detections, or are low-metal stars responsible? Or maybe it’s a combination of both. At this point, we just don’t know for sure.

However, LIGO and its sister detector Virgo are currently undergoing planned upgrades, and should start observing again in early 2019. And when they kick back on, astronomers will no doubt be hunting for gravitational-wave signals that can be paired with electromagnetic observations. Such multi-messenger detections will likely be key to the future of astronomy, so make sure to stay tuned.