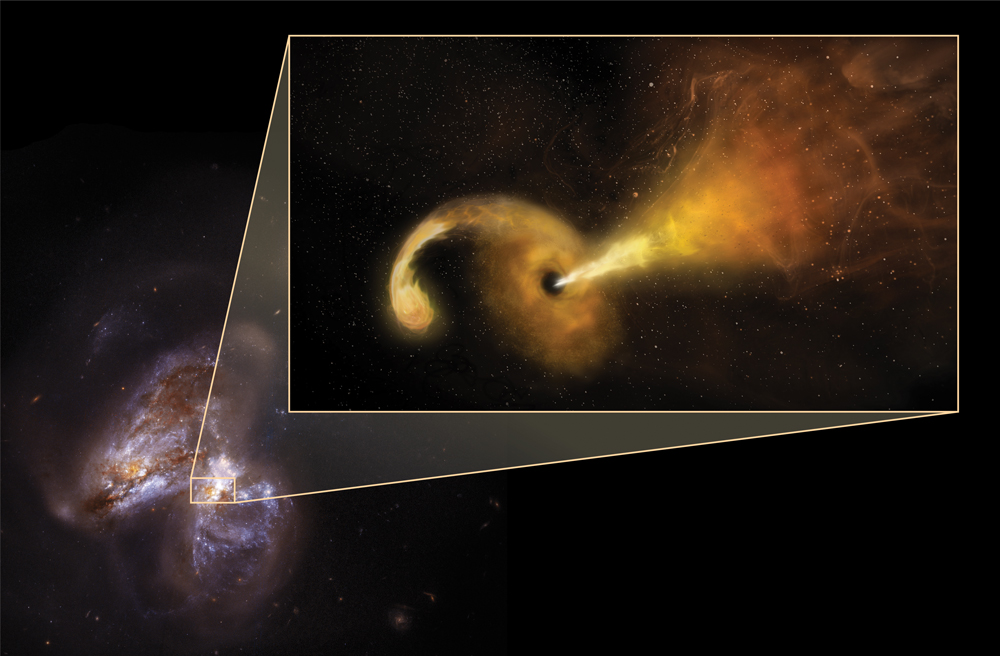 Artistâ€™s conception of a tidal disruption event (TDE) that happens when a supermassive black hole tears apart a star and launches a relativistic jet. The background image is a Hubble Space Telescope image of Arp 299, the colliding galaxies where the TDE from this study was found. (Credit: Sophia Dagnello, NRAO/AUI/NSF; NASA, STScI)

Astronomers Seppo Mattila and Miguel PÃ©rez-Torres usually study the natural deaths of stars, but they werenâ€™t going to pass up the chance to investigate a stellar murder.

A new paper in Science describes how they nabbed photographic evidence that a supermassive black hole in a relatively nearby galaxy tore apart and consumed part of a star in a phenomenon called a tidal disruption event (TDE), spewing jets of material in the process. Scientists have observed these cosmic crime scenes before, but this was the first time anyone managed to get such detailed images of the jets and their changing structure over time.

Scene of the Crime

At the ends of their natural lives, stars more massive than our sun explode as supernovae. Astronomers who study supernovae, like Mattila and PÃ©rez-Torres, rely on catching these stellar fireworks by chance, but they can stack the odds in their favor by monitoring starburst galaxies, full of young, massive stars that could go supernova at any moment. Though a typical galaxy like our own Milky Way may only experience one supernova every 50-100 years, a starburst galaxy may get one every 3-4 years.

â€œOne of the reasons to study these galaxies is because of course we didnâ€™t want to wait a hundred years,â€� chuckled PÃ©rez-Torres of the Instituto de AstrofÃ­sica de AndalucÃ­a in Granada, Spain. â€œWe will not live enough.â€�

It was in one of these starburst galaxies that the pair found the grisly murder scene â€” though not together. In January 2005, astronomer Mattila of the University of Turku in Finland found a bright flash of infrared light in the galaxy collision named Arp 299, some 146 million light-years away. The infrared source was near the center of one of the galaxies, which harbors a thick ring of dust around a supermassive black hole. He wasnâ€™t sure what it was but wanted to find out.

Later that year, PÃ©rez-Torres found a bright source of radio light at the same location while conducting a separate study on supernovae. When he came across one of Mattilaâ€™s papers, he realized that they were looking for the same objects, but with complementary areas of expertise. He reached out, and the two joined forces to investigate the source of this bright emission, leading a team of over thirty scientists.

By observing the object over the course of 10 years, the team found that the source of the radio emission, which started as a bright blob, extended into a jet-like structure, moving close to the speed of light. These clues pointed not to a supernova, which would emit light in all directions, but to a TDE, which can churn out jets of material at relativistic speeds.

Mattila and PÃ©rez-Torres had hit the jackpot. These events may be about 100-1000 times rarer than supernovae, and surveys for finding them typically need to observe an extremely large number of galaxies just to detect one. â€œWe should feel very lucky that nature actually provided us such an event to witness,â€� said Mattila.

Though this wasnâ€™t the first time astronomers saw jets from TDEs, it is the first time they were close enough to get in-depth images and study the structure of the jet itself. This event could be the first TDE seen in a galaxy whose supermassive black hole is actively feeding from a disk of material already; this particular star-gobbling event is a cherry on top. In the past, astronomers have found TDEs in galaxies with relatively tame central black holes.

â€œThatâ€™s whatâ€™s special about this event,â€� said Brian Metzger, a theoretical astrophysicist at Columbia University who was not involved in this research, â€œpartially that itâ€™s very close, and partially that it shows that these jetted TDEs can happen in a range of different environments.â€�

Stellar murders can happen anywhere, it turns out, just like the human kind. With this mystery in the bag, astronomers are one step closer to understanding the violent behavior of black holes.

Editorâ€™s note: A previous version stated that â€œastronomers had never before seen a TDE in a galaxy whose supermassive black hole is actively feeding from a disk of material already,â€� but there may have been past detections. It has been updated to reflect that.