A new study fills gaps in the when and where of cat domestication, explaining how the animals went from lean hunters to, uh, this. (Credit G. Tarlach…yes, it’s my cat, but don’t kvetch about his obesity. I took the photo shortly after I adopted him. Thanks to careful management he is now several pounds lighter.)

The truth about cats and dogs is this: despite being the two species that humans are most likely to have as pets, Rex and Ruffles had very different paths from the wild to our couches. Analyzing ancient and modern cat DNA, researchers believe they have figured out much of the mystery surrounding cat domestication — and no, it didn’t start in ancient Egypt. Both the archaeological and paleogenetic record show that dogs are unique in being the only animal domesticated prior to the advent of agriculture — so while cat and dog fanciers will forever disagree on whether Canis lupus familiaris is indeed man’s best friend, science has shown us that it is at least man’s first friend. With an ongoing, multidisciplinary research project to pin down the origins of dogs, scientists are developing a fairly detailed picture of Fido’s roots.

But despite millions of us living in close quarters with cats, much of their backstory is unknown. Archaeologists have found some remains — the cat mummies of ancient Egypt are the most famous, though a much older complete cat skeleton was buried beside a human at a site in Cyprus that dates back to about 7,500 B.C. But researchers don’t have enough to be certain about where and when cat domestication occurred.

(We’re already pretty sure about the how of cat domestication…most researchers believe that, as Neolithic humans began to farm, they started storing grain, which attracted rodents. Wildcats, already dispersed across Africa, Europe and Asia, were attracted to grain-munching prey. In a kind of symbiosis called commensalism, humans tolerated the cats being around because the vermin hunters kept the grain pest-free. Over time, humans developed a more personal relationship with their local ratkillers. A 2013 study of 5,300-year-old cat remains from China, for example, found evidence that the animals were being cared for.)

Published today in Nature Ecology & Evolution, researchers obtained genetic material from nearly 400 cats living and very dead. More than 350 ancient cat samples were collected, including from remains up to 9,000 years old. Unfortunately, but not surprisingly, they were only able to obtain usable sequences of ancient DNA (aDNA) — in this case, maternally-inherited mitochondrial DNA — from 209 of the samples. That’s the thing about aDNA: the older it gets, the more degraded and tougher to work with it is.

The team also extracted the DNA of a couple dozen modern wildcats from Bulgaria and East Africa. Why wildcats? Well, today’s house cats are descended from Felis silvestris lybica, the only one of the five subspecies of F. silvestris ever domesticated (as far as we know). F. s. lybica is today dispersed across the northern half of Africa and southwest Asia, while F. s. silvestris is the subspecies found in Europe. Having DNA from these populations helps researchers compare domesticated cats with a broader range of wild distant relatives, leading to more refined datasets. 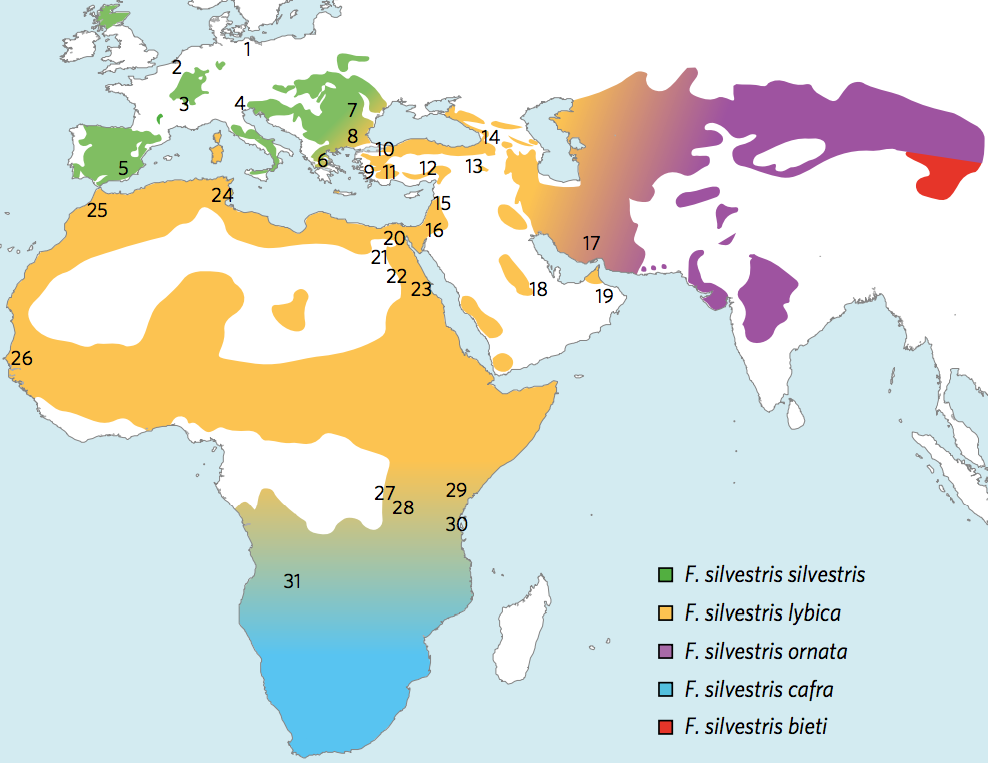 From today’s paper in Nature Ecology & Evolution, the modern distribution of the five subspecies of F. silvestris; only one, F. s. lybica, has been domesticated, but that domestication occurred twice, in both southwestern Asia and Egypt. Numbers here refer to locations of samples used in the study. (Credit Ottoni et al 2017)

And those conclusions point to two lineages of domesticated cats. The first showed up in southwest Asia and reached Europe as early as 6,400 years ago. The second, originating in Egypt after the southwest Asian line and before 1,000 years ago, spread throughout the Mediterranean world along both land-based and maritime trade routes — no surprise there, since ship cats are a traditional way to reduce the number of wayfaring rodents aboard.

The lack of specificity in the dates may disappoint some readers, but analyzing F. s. lybica DNA is a tricky business, regardless of how old it is. As ship cats traveled further afield from their homelands, they enjoyed the occasional shore leave and bred with wild populations of at least two subspecies, tangling up all of the different lineages’ DNA.

(The research team also noted that the high degree of hybridization between domesticated and wild populations of cats, which continues today, explains why the average house cat retains much of the look and behavior of its wild distant kin, in contrast with dogs.) An illustration of F. s. lybica shows how similar the wildcat is to today’s house cat, due to continued hybridization between populations. (Credit Wikimedia Commons/artist unknown)

From Stripes To Splotches

Today’s study also charts the rise of the single mutation that gives us today’s rather common tabby coat pattern, and in doing so sheds additional light on cat domestication overall.

A few years ago, researchers discovered that the Taqpep gene controls whether a cat is striped (or, in cheetahs, spotted) or has more of a blotchy pattern. That blotchiness, though present in 80 percent of house cats today, is recessive, and seldom seen in the wild. 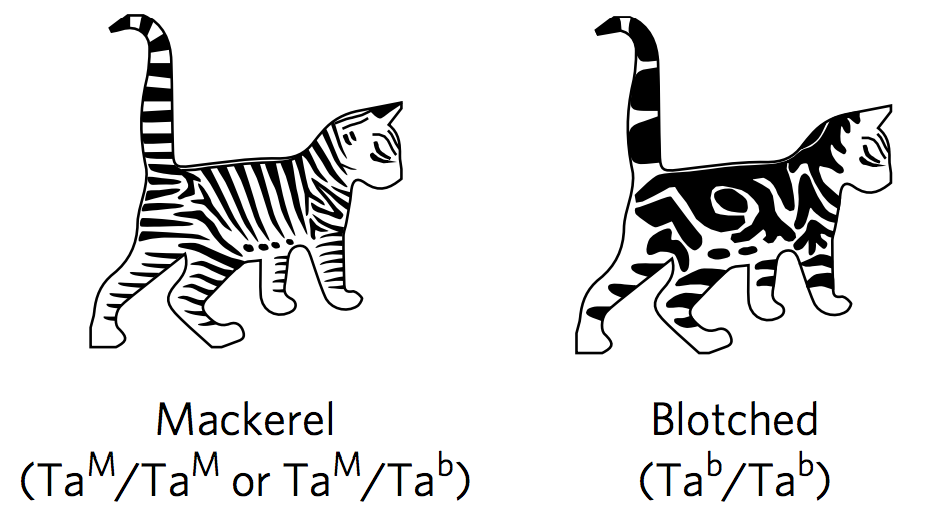 A single mutation on the Taqpep gene causes a blotched coat pattern, common in house cats but rare in the wild, where the striped, or mackerel, pattern, is typical. (Credit Ottoni et al 2017)

Today’s team found that, before the Middle Ages, the striped (mackerel) pattern typical of wildcats also dominated in domesticated cats. It was only later, particularly from the 18th century on, that they saw the blotchy pattern becoming widespread.

Because blotchiness appears to be an appearance trait that humans selectively bred domesticated cats to have, and because it occurred millennia after cat domestication itself, the team concluded that the emphasis on earlier selective breeding was for behavioral traits rather than looks. In other words, having a cat that was a great mouser or particularly sure-footed on a ship’s deck was more important than whatever this is: Can’t get enough of the kittehs? I know videos featuring cats are few and far between on the internet (/sarcasm) so feast your eyes and ears on a Nature short summing up today’s research.