An Elephant Never Forgets…to Be Awake 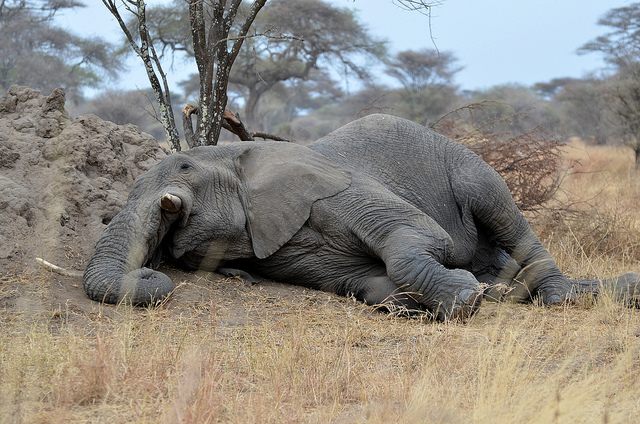 They say an elephant never forgets. But a more accurate adage would be that an elephant never sleeps—or, hardly ever. Tracking two wild elephant matriarchs for a month revealed that they averaged only a couple of hours a night. On some nights they surprised researchers by never going to sleep at all. This might make them the most wakeful mammals in the world.

The sleeping habits of large mammals are a “contentious” subject, says Paul Manger, a professor at the University of the Witwatersrand in Johannesburg, South Africa. Research suggests that in general, bigger mammals need less sleep. The pattern is strongest among plant-eaters. They may have evolved to need little sleep because their low-calorie diet forces them to spend more hours eating. The pattern is weaker when you include omnivores and carnivores—lions, for example, snooze up to nine hours a night.

Further complicating things, much of the data on animal sleep comes from captivity. Studies of elephants have found them sleeping up to six hours a night in zoos and circuses. But animals may sleep less in the wild. To better understand the relationship between size and sleep, scientists need data on animals living in nature.

Gathering sleep data on wild elephants is challenging, to say the least. Manger and his coauthors found a way to do it without having to wrestle the pachyderms into a sleep lab. They based their experiment on a simple observation by other researchers: elephants only stop moving their trunks when they’re asleep.

The researchers took a helicopter into Bostwana’s Chobe National Park and caught up with two elephants. Each was a female, and the leader of her herd. After tranquilizing each elephant, they surgically implanted a Fitbit-like activity tracker—coated in wax, and with the wristband removed—in her trunk. They also gave the elephants GPS collars with built-in 3D accelerometers, which would reveal when the animals were lying down. After the experiment ended, they tracked down the two elephants once more and removed the equipment. (They chose matriarchs for practical reasons, Manger explains. The site is near the borders of Namibia, Zambia and Zimbabwe, and male elephants here roam more widely than females. If their study subjects crossed into another country, the researchers would have to clear more bureaucratic hurdles to track the elephants down again.)

The collars and activity trackers gathered more than a month’s worth of data on the two elephants. Some of the results were startling.

Fitting with the theory that big animals sleep less, the matriarchs hardly slept at all. The researchers counted any time when the trunk was still for five minutes as sleep—which, if anything, may have overestimated actual sleep time. The elephants averaged two hours of sleep per day. The sleep happened in several short bursts, mostly between 1:00 AM and 6:00 AM. The animals slept in a different location every day, as their herds roamed. And they did most of their resting on their feet. They lay down to sleep only once every three or four days.

Each elephant also had two or three occasions where she skipped a night of sleep entirely. “The nights without sleep really took us by surprise,” Manger says. During these sleepless periods, the matriarchs seemed agitated; they were more active than usual and traveled greater distances (averaging 30 kilometers, or 19 miles). They may have been leading their herds away from hunting lions or from male elephants harassing the herd for a mate. Or, the authors add, from poaching humans.

In the future, Manger hopes to study male elephants, or multiple animals within one herd. This might reveal different sleep patterns. But given the similarities between the two elephants in the study, the researchers think they at least got a good snapshot of how an elephant matriarch sleeps—which is to say, less than any other mammal that’s been studied.

There are some clues in elephant brains as to how they might pull this off. Manger says elephant brains have more specialized neurons driving wakefulness than other mammals do. One cluster of neurons in particular controls appetite as well as wakefulness.

“When you have more neurons driving your appetite, and you have a large body, these neurons will make you feel hungry, so you will stay awake to eat more to sustain your larger body,” Manger says. “Only when you are full will these neurons stop driving hunger and arousal, and your body will be able to go to sleep.” Finally, an elephant might add.