Almost without warning, Tropical Storm Emily formed off the Florida coast and made landfall just south of Tampa Bay

Where the heck did this storm come from?!

Tropical Storm Emily, as seen in a timelapse of GOES-16 weather satellite imagery covering two and a half hours, starting at about 7 a.m. (Florida time) on Monday, July 31, 2017. (Source: CIMSS Satellite Blog)

Seemingly out of the blue, Tropical Storm Emily has spun up off Florida’s Gulf Coast and made landfall just south of Tamp this morning. Where the heck did this storm come from?

At 2 p.m. EDT on Sunday, the National Hurricane Center’s Tropical Weather Outlook noted that something was brewing in the Gulf of Mexico. But the outlook also noted that upper-level winds were not conducive to anything significant developing:

A tropical wave located several hundred miles west-southwest of the Cabo Verde Islands continues to produce a large area of cloudiness and disorganized shower activity. Some slow development of this broad disturbance is possible over the next several days while the system moves westward to west-northwestward at 10 to 15 mph.

Even at 2 a.m. this morning, the forecast was for anything but a tropical storm:

Environmental conditions are marginally conducive for some additional development before the low moves inland over the central Florida peninsula later today or tonight, and over the western Atlantic late Tuesday or Wednesday.

Those environmental conditions included high wind shear, and lack of atmospheric moisture in the middle-level of the atmosphere, according to Jeff Masters and Bob Henson in a story at the Category 6 blog.

An animation of infrared imagery from the GOES-16 weather satellite shows Tropical Storm Emily at about the time it came ashore near Tampa Bay, Florida, on Monday, July 31, 2017. (Source: CIMSS Satellite Blog)

Clearly, though, that wasn’t enough to retard the formation of the current storm, which was aided by very warm surface water temperatures near 30°C (86°F).

By 6 a.m. EDT today, a tropical depression — Tropical Depression 6 — had formed. Within two hours of that, the depression had strengthened into Tropical Storm Emily. And by 11:10 a.m., Emily had stormed ashore on Anna Marie Island with maximum sustained winds of about 45 miles per hour. 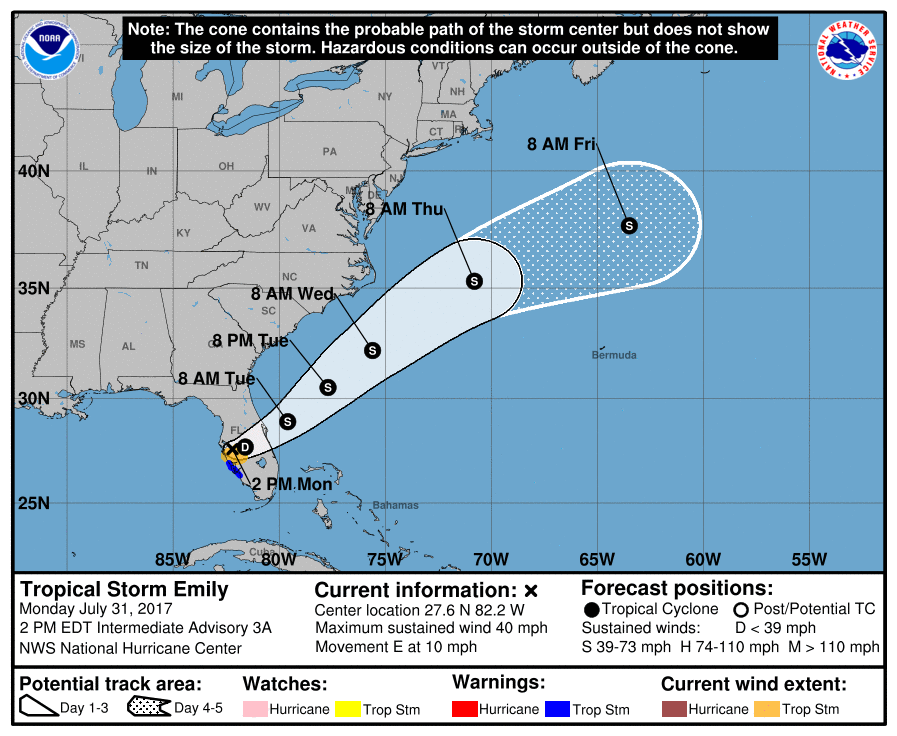 The main threat for Florida now is from heavy rains. As the 2 p.m. public advisory from National Hurricane Center put is:

Tropical storm winds will continue as well. And then there’s this:

TORNADOES: A brief tornado could occur across the central and southern Florida Peninsula today, with isolated waterspouts possible over the coastal waters of southwestern Florida.

It will now be interesting to see whether Emily behaves as expected. Goodness knows, the storm hasn’t followed the script so far!