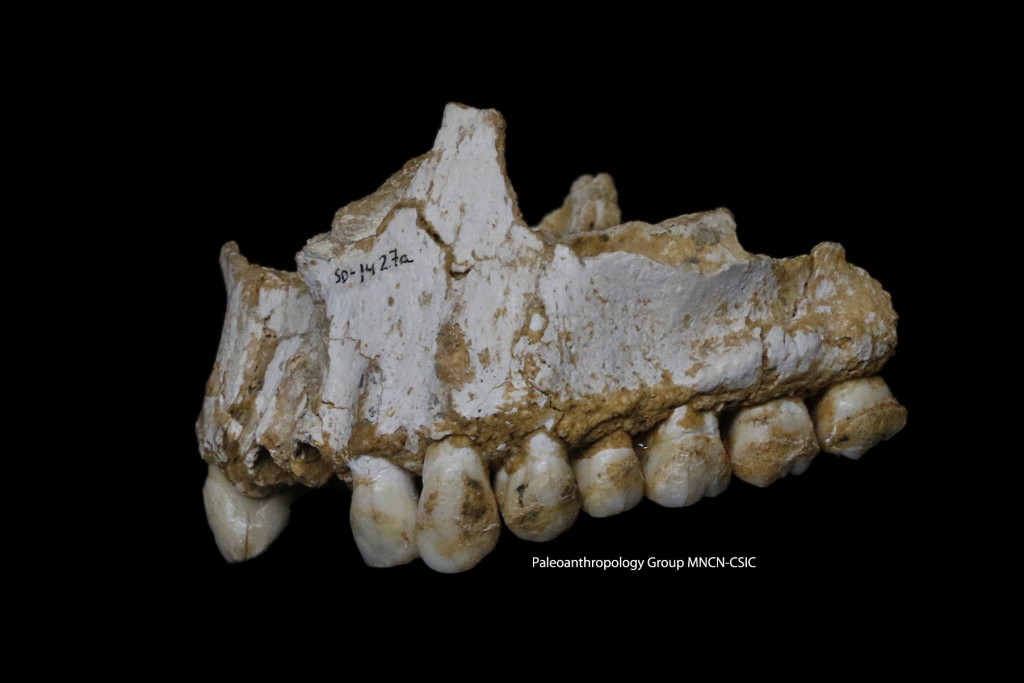 The upper jaw from an individual from El Sidron. You can see the dental calculus deposit on the rear, right molar. (Credit: Paleoanthropology Group MNCN-CSIC)

The stuff that clings to teeth can tell an interesting story.

On Wednesday, scientists revealed new insights gleaned from dental plaque stuck on the teeth of five Neanderthals from Europe. From a few teeth, scientists learned how Neanderthals used natural medicines and how their diets varied by region. They also learned that modern humans and Neanderthals were swapping spit long ago.

Given time—and negligence—dental plaque will harden into a substance called calculus, which is composed of minerals and the remnants of bacteria and other microorganisms. As calculus layers accumulate, they form a time capsule that stores information about the things we like to cram into our mouths. Archaeologists use ancient calculus to peer back in time and study Neanderthal diets, behavior and health, by examining DNA trapped in these fossil teeth residues.

Neanderthals are the closest extinct relatives of modern humans, and past studies of Neanderthal teeth and bones have unearthed a trove of details about their lives, such as the fact that they interbred with modern humans. Archaeological findings suggest that Neanderthal diets vary widely; some groups were as carnivorous, hunting prey such as reindeer, woolly mammoths and woolly rhinoceroses, while other groups dined mostly on plants, including some medicinal varieties.

An international team lead by the University of Adelaide in Australia analyzed DNA in calculus from four Neanderthals held European museum collections: two from Spy cave in Belgium, two from El Sidrón cave in Spain. The four samples were between 42,000 and 50,000 years old, which scientists claim is the oldest dental plaque to be genetically analyzed.

DNA from their teeth reaffirmed the regional variety in Neanderthal diets. For example, Neanderthals from Spy survived mostly on woolly rhinoceros and wild sheep, along with wild mushrooms, while Neanderthals from El Sidrón showed no signs they ate meat; instead, they dined on pine nuts, moss, mushrooms and tree bark.

One rather sick Neanderthal from El Sidrón was eating a steady diet of poplar, which contains the natural painkiller salicylic acid, the active ingredient in aspirin, as well as plants covered in Penicillium mold, which generate the antibiotic penicillin. Life was tough for this guy, who was suffering from a dental abscess, and DNA evidence indicated the presence of intestinal parasites known as microsporidia, which cause severe diarrhea.

The dental calculus on a Neanderthal tooth also possessed the near-complete genome of an oral microbe, which at roughly 48,000 years in age is the oldest microbial genome sequenced yet. The germ in question, Methanobrevibacter oralis, is linked to gum disease. The scientists detailed their findings Wednesday in the journal Nature.

But about that spit swapping. Analysis of versions of this microbe found in Neanderthals and modern humans suggests that both lineages were exchanging Methanobrevibacter oralis as late as roughly 126,000 years ago.

“They may have been kissing to share this oral microorganism,” says study lead author Laura Weyrich, a paleomicrobiologist at the University of Adelaide in Australia.

The scientists are currently analyzing dental calculus from hundreds of ancient individuals around the world to reconstruct what communities of microbes once lived in and on humans, and understand how this “microbiome” changed and diverged in different human populations.

“Ancient DNA can provide critical information for modern medicine — we can use our ancestors as a model system to understand what happens to human health when lifestyles and diets change,” Weyrich says.