After 1,000 Years, Astronomers Still Unlocking Secrets of the Crab Nebula 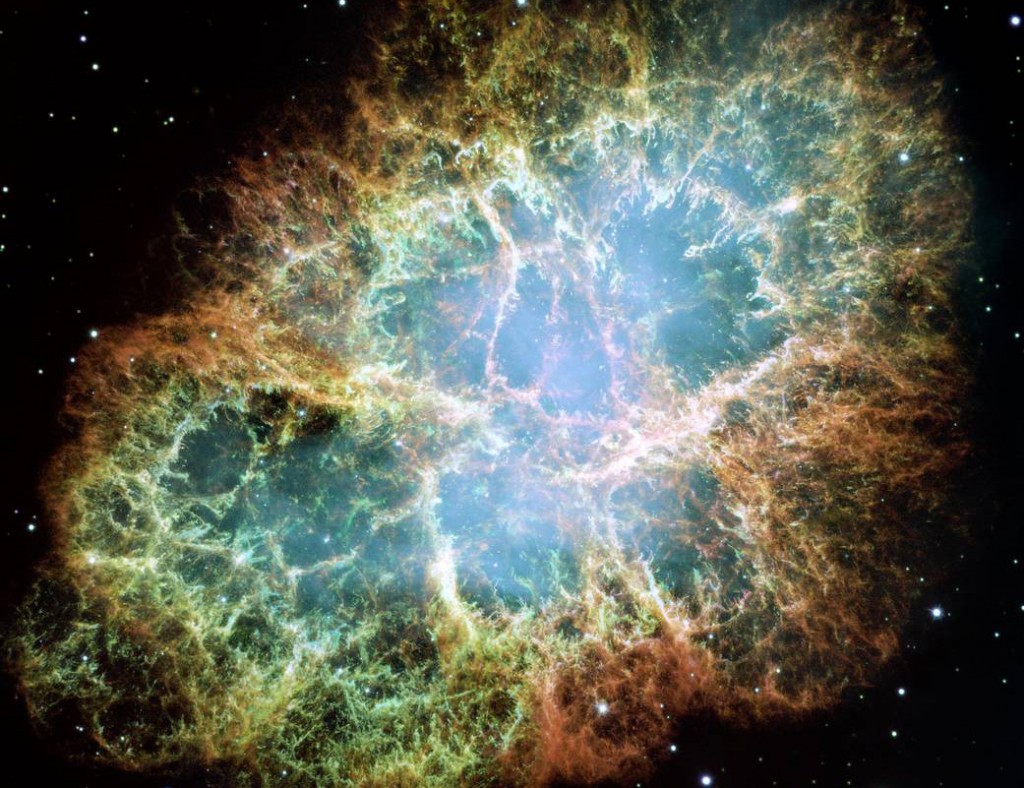 Skywatchers have been enjoyed views of the Crab Nebula for nearly 1,000 years. (Credit: NASA, ESA, J. Hester, A. Loll (ASU))

In late spring in the year 1054, a strange light appeared in the sky in what we would now call the constellation Taurus the Bull. It was a new star, where no star had been before. It grew quickly brighter, until by July it outshone everything except the moon. Over the next two years it faded away, becoming a star of normal brightness and eventually disappearing again entirely.

Astronomers in China and Japan recorded its arrival, and other observers around the world surely noticed it as well. But it was the Dark Ages in Europe, from which we have relatively few written records. Added to that, scholars both there and in the Middle East were more interested in the reliable and seasonable patterns of the incorruptible heavens, and less so in the unpredictable appearances of comets and guest stars. It’s also possible, and this should shock no one, that it was clouded over and rainy in England during the time the star shone most brightly.

But even for the most observant, the light that shone so brightly for almost two years was forgotten after hundreds more passed by without its reappearance. Its memory survived only in written records, and no one paid it much attention. 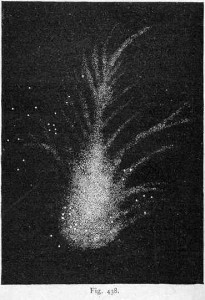 A drawing of the Crab Nebula from 1844. (Credit: Earl of Rosse/Wikipedia

In 1731, English astronomer John Bevis turned his telescope to the same patch of sky in Taurus, and revealed an object that came to be known as the Crab Nebula. In 1758, Charles Messier initially mistook the same blurred object in his eyepiece for Halley’s Comet, one of the reasons he created his now-famous list of Objects That Are Not Comets, frustrated by all the stationary blurs scattered across the heavens. Messier’s list is now one of the most famous catalogs of celestial objects, and is frequently utilized by amateur astronomers. The catalog makes up some of the brightest and most beautiful telescope targets in the sky, and the Crab Nebula is memorialized as Messier Object Number 1. Astronomers across 200 more years viewed the nebula’s fine tendrils and blobby shape, drawing pictures and taking photographs that, in typical astronomy fashion, rarely resembled any kind of crustacean.

In 1921, Carl Otto Lampland observed changes in the nebula’s shape. These changes are nothing Lampland could have observed by himself. Instead, he was comparing his observations to those taken across the past two centuries by other astronomers. Yes, many of these observations were from hand-made drawings but nonetheless a consistent story appeared: The nebula was growing.

What’s more, they could measure the speed of the expansion, and count backwards. They calculated that the nebula had been expanding for something like 900 years. Astronomers combed the records, turning up the record of the Chinese guest star, and then the matching Japanese account. Astronomers realized this evolving cloud of gas occupied the exact location described in records from almost a millennium prior. Thanks to other recent advances in the understanding of stellar evolution, they realized the nebula, until recently a catch-all term for any cloudy object in the heavens, was in fact a supernova remnant: the last vestiges of a star’s spectacular and explosive demise.

If it were a supernova, it would have been readily visible to long-ago astronomers, or even to Joe the Farmer and Non-Astronomer standing outside his house at night.  Once they began looking, other possible matches arose in the Middle East, Europe, and even the Americas, though many of these are ambiguous or disagree on specifics of date and location. 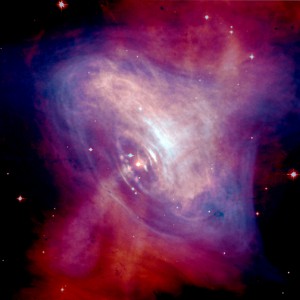 In 1967, Jocelyn Bell Burnell observed the first pulsar, a collapsed neutron star that sends out regular bursts of radiation like heartbeats long after the supernova event that ended its first life as a normal star. Astronomer Franco Pacini quickly realized the Crab Nebula glows to this day thanks to a pulsar still beating away in its interior, and observations proved him correct within the year. The Crab Nebula is more accurately a pulsar wind nebula wrapped inside a supernova remnant. The pulsar continues to whip up the gas immediately around it, blowing a bubble inside the larger shell of expanding debris from the supernova thousands of years before.

The Crab Nebula is a triumph of the most cooperative of science teams, one stretching across millennia and nations. With the naked eye, hand-made drawings, and state-of-the-art technology from the 18th century to the 21st, humans have watched and recorded its evolution. Separately, the pieces were at times unclear – a guest star, a comet, or, perhaps least likely, a crab – but together, they paint a beautifully clear picture.