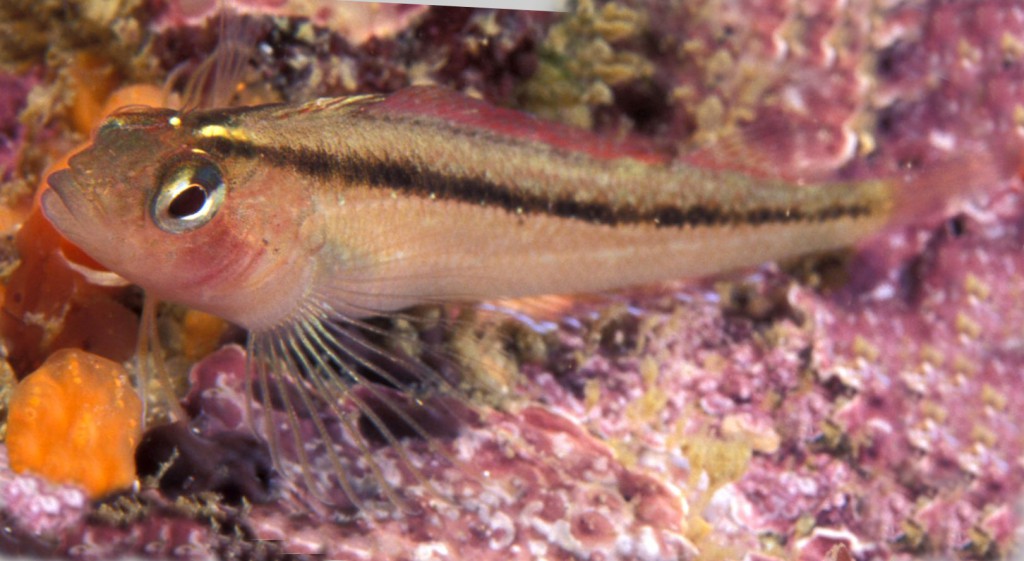 A common triplefin, one of the fish species that may dominate temperate habitats in the near, acidic future. Photo c/o Wikimedia

Scientists predict that in the next twenty years, the amount of carbon dioxide (CO2) in our atmosphere will rise from the roughly 404 ppm it is now to over 450 ppm—and as a result, ecosystems worldwide will change. Many impacts will be particularly felt in our planet’s oceans. As atmospheric CO2 levels rise, more of the gas dissolves into our seas, causing a chemical chain reaction which makes the water more acidic. Acidification can act independently or synergistically with rising temperatures, impacting different species in different ways. In a desperate rush to conserve species, scientists are racing against the clock to understand how marine habitats and the species that live in them will be affected by acidification and identify the best ways to retain our marine biodiversity going forward.

The bulk of the research on acidification to date has focused on reef-building corals, and rightfully so, as these reef-producing species are the foundation of some of the richest ecosystems on Earth. But reefs aren’t the only prolific habitats in the sea, and corals certainly aren’t the only species that changing water chemistry will affect. Lab-based studies have found that all kinds of organisms, including fish, are sometimes affected by acidified waters, but how these individual impacts on species translates to ecosystem-level effects is less clear. So to understand how acidification might impact fish communities, a team of scientists led by Professor Ivan Nagelkerken, a marine ecologist in the University of Adelaide’s Environment Institute, turned to natural laboratories.

The Australian researchers were able to look at what may happen to fish communities under climate change thanks to a quirk of marine geology found in some temperate kelp forests: underwater volcanic vents. These vents spew CO2, making it so that at these sites, water concentrations of CO2 are as high as those predicted under continued climate change. “It was like time travel — you could see into the future of what our ecosystem and fish species might look like,” Nagelkerken said, in a press release. To see how such acidification affected fish, the scientists simply compared these naturally occurring futuresque CO2 sites with similar sites nearby. Their findings were published as a corrected proof this month in the journal Current Biology.

Perhaps counterintuitively, they found there were more fish where in areas with higher CO2. The researchers attributed this piscene boom to increases in the abundance of yummy food species like small crustaceans and snails. But while there were more fish to be found, the community was markedly less diverse. Acidification negatively impacted the kelp, leading to the proliferation of smaller, turf-like algae. And it was in these turf-dominated habitats that only some species of fish—”somewhat the marine equivalent to rats and cockroaches”—reigned supreme.

“Small weedy species would normally be kept under control by their predators,” explained Nagelkerken. These bossy little fishes are generally kept in check by mid-size predatory fish that also live in the kelp forests. But ocean as acidification transforms kelp forests into grassy turf beds, “we are losing the habitat that protects these intermediate predators, and therefore losing these species.”

This might not be considered such a bad thing, at least from a purely selfish perspective, if the fish that proliferate like weeds were useful to us. But the fish that dominated the high CO2 habitats aren’t ones we tend to target. “No one really wants to eat them.” While the study can only speak to the potential future of kelp forests, it’s possible, and even likely, that similar cascades would happen in other marine habitats, as foundational species are replaced by other organisms that can stand the heat and acidity. Thus the end result of ocean acidification might not be empty oceans, but fish, fish everywhere—just not a bite to eat.

Nagelkerken is skeptical that we can decrease our CO2 output quickly enough to prevent acidification, but he does think there may be a way to keep this doomsday scenario from happening. “We showed how diminishing predator numbers has a cascading effect on local species diversity,” he explained. Therefore, if we reign in our direct impacts on these key species, we might be able to buy time. “Strong controls on overfishing could be a key action to stall diversity loss and ecosystem change in a high CO2 world.”