A Nuclear Bomb’s Debris Could Reveal How It Was Made 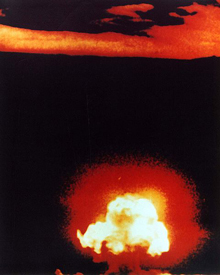 If a country fires an airborne nuclear missile, the source of the attack is obvious. But what about the more fluid threat that hangs over the 21st century—terrorists sneaking a nuclear device into a city and setting it off? In a study in the Proceedings of the National Academy of Sciences this week, researchers suggest that even in the charred aftermath of a nuclear explosion, there could be evidence left behind that helps to identify the source of the bomb.

Physicist Albert Fahey and company went back to the beginning of the atomic age, to the United States’ first atomic bomb test in New Mexico in July 1945. As that bomb test was called “Trinity,” the glass left behind by the blast is called “trinitite.” Fahey obtained some of that glass to show that all these years later, it still contained evidence of the bomb’s makeup.

“Prior to this study, people didn’t realise that other components of the bomb could be discerned from looking at ground debris and seeing what’s associated [with it],” said Dr Fahey. “But there are some distinctive signatures that were in the bomb other than fission products and plutonium, and that gives you hope that you can get some additional information out of it – like where it was made.” [BBC News]

First, there’s the radioactive material itself. Fahey’s analysis turned up plutonium in the amount of 400 parts per billion in the trinitite, correctly showing that the Trinity bomb was powered by plutonium, not uranium. And once you determine which element powered the bomb, he says, you can dig deeper for clues about where the material came from.

When the fissile isotope plutonium-239 is made in nuclear reactors it is inevitably contaminated with plutonium-240. The exact ratio of the two isotopes differs from plant to plant. In the trinitite sample, the researchers found the ratio to be 1.6 per cent, which is similar to what the Trinity bomb is though to have contained, says Fahey. [New Scientist]

Besides the clues to the plutonium’s origins, Fahey found that there may even be post-blast clues to the origin of the metals and secondary materials used to build the bomb.

The researchers write in the paper that contrary to the nuclear material that would be likely to come from wherever a person could get it, “whether it was submitted by a state that’s sympathetic or they got it on the black market”, other materials would likely be of local origin. “The materials that go to make the rest of the bomb, to produce the critical mass, [would be] obtained from local sources,” said Dr Fahey. [BBC News]

For instance, he says, the isotopic composition of the lead used in the bomb’s housing could narrow down the number of mines it came from to a few.

It would be naive to think that clues like these would be enough on their own to finger a particular terror group or cell responsible for an attack, especially with materials traded so often across national boundaries. However, Harvard’s Tom Bielefeld says the key would be to put forensic evidence together with a larger investigation.

Bielefeld recognises that these kinds of clues could prove important when combined with traditional intelligence. “You need to really gather all the information you can get,” he says. “It’s really a big puzzle and every clue may be valuable.” The work is also “an important contribution to a body of literature that’s very sparse”, he adds. [New Scientist]