A Chink in the Brain Armor: the NFL, Concussion and Omega-3s 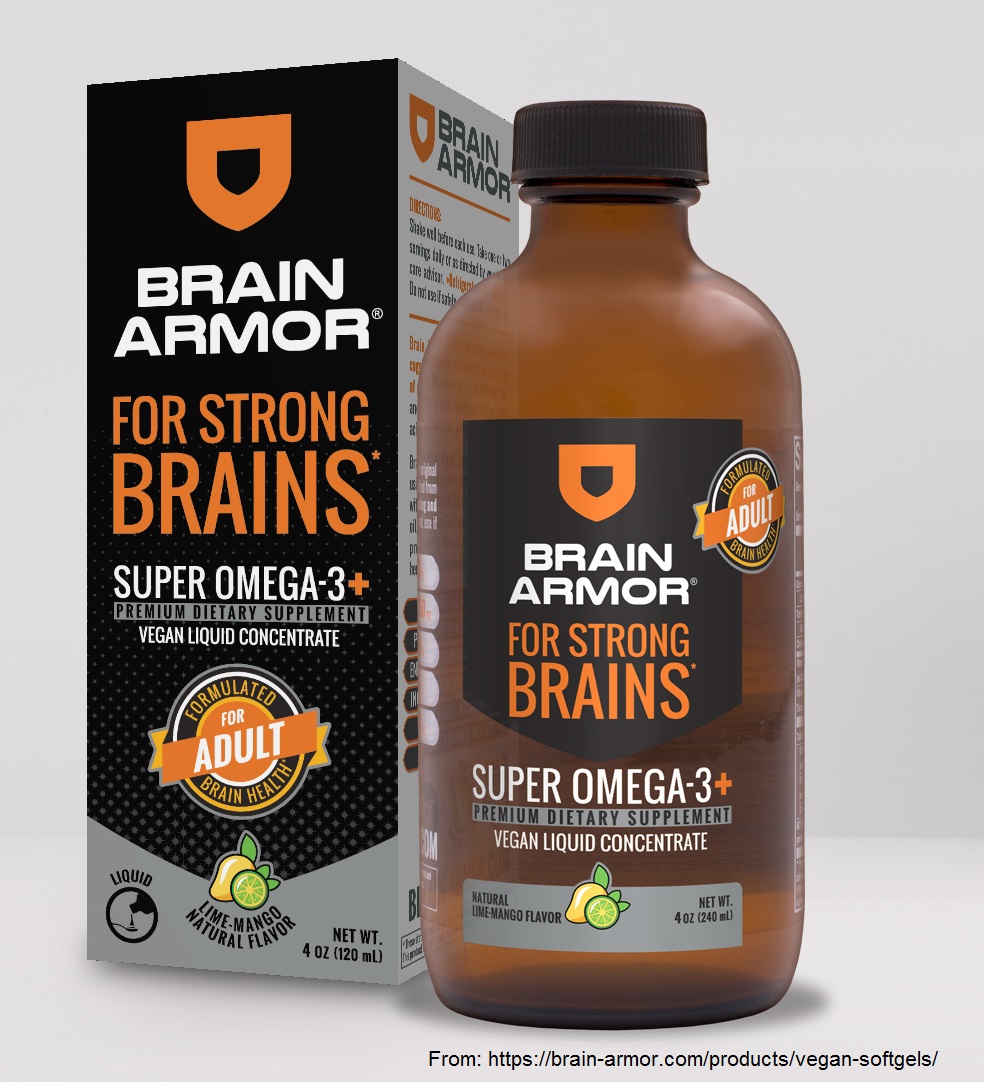 On Twitter, I was pointed to the strange story of Brain Armor®, a nutritional supplement which is supposed to promote brain health.

While there are many supplements that are sold for the same purpose, Brain Armor has a unique claim to fame: it is the official brain health supplement of Pro Football Legends (PFL), the “commercial marketing arm of the NFL Alumni.”

Brain Armor’s links to the NFL Alumni raised eyebrows on Twitter because the NFL has famously been the target of legal actions brought by former players who say they suffered concussions and chronic traumatic encephalopathy (CTE) from their time as professional football players. In 2013 the NFL paid out $753 million to settle one of these suits. The controversy was even made into a movie called Concussion.

Another Brain Armor partner is Pop Warner, the largest youth football organization in the USA and, like the NFL, the target of some CTE lawsuits. “We are constantly working to identify and implement the most current, science-driven methods to improving overall player safety. Brain Armor is a great addition to that approach”, according to Pop Warner.

What exactly is Brain Armor supposed to do? Like most nutritional neuro-supplements, Brain Armor’s website makes no strong health claims. The supplement is not explicitly promoted as a solution to any health problem, and a disclaimer warns that “This product not intended to diagnose, treat, cure or prevent any disease.”

However, I think it is fair to say that there is an implication that Brain Armor will help to protect the brain against injuries. The name “Brain Armor” is rather suggestive: armor, after all, defends against blows. The product is actively targeted at football players and in 2018, no-one involved in American football is unaware of concussion and CTE.

If you look at the testimonials pages for Brain Armor, you’ll find references to concussion and brain injury, like this one:

Finally, if you look online, you will find that people are making the link between Brain Armor (and similar products) and concussion. Overall, while Brain Armor are not themselves claiming to protect the brain against concussion and trauma, it is clear that some consumers do think this Armor will protect their brain, and I suspect that Brain Armor are happy that this perception exists.

So what’s the science?

The main ingredient in Brain Armor are omega-3 fatty acids. You’ve probably already heard of these, as omega-3’s have been the focus of a lot of research and media interest. There is some evidence that they improve health, especially of the heart and possibly the brain. It’s fair to say the benefits, if any, of omega-3 supplementation are still being debated.

What about concussion specifically? Here, it’s easy to summarize the evidence base: there has never been a published trial of omega-3s in the prevention or treatment of concussion in humans.

The closest thing to a human trial was a 2016 study reporting that omega-3 reduced levels of the ironically-named NF-L, considered a blood biomarker of brain injury, in football players. This study didn’t examine actual clinical outcomes. There are also a number of as-yet unpublished trials either ongoing or recently finished.

One such paper was published recently in Nutritional Neuroscience: Supplements, nutrition, and alternative therapies for the treatment of traumatic brain injury. This paper is rather interesting from the perspective of Brain Armor and the NFL.

One of the authors of the Nutritional Neuroscience paper is Dr. Julian E. Bailes, a neurosurgeon and omega-3 researcher who serves as Senior Medical Advisor to Brain Armor and as Co-Chair of the Brain Armor Foundation.

Also on the author list is Dr. Joseph Maroon, another neurosurgeon and a top advisor to the NFL. Maroon is famous for his view that the risks of CTE in football players have been overstated. But Maroon has also long been an evangelist for omega-3s, although his preferred brand is called Omax3, a rival to Brain Armor.

To be fair, omega-3 is only a small part of the 2018 paper, but a declaration of the possible conflicts wouldn’t have gone amiss.

Another Brain Armor-linked researcher with a possibly laid-back approach to conflicts of interest is Dr. Jonathan M. Oliver. Oliver, who was lead author on the omega-3 biomarker study mentioned earler, was first author of a March 2018 piece in which he heralded the “emerging preclinical evidence in favor of omega-3.”

Oliver declared no interests or financial disclosures, and yet he had been awarded funding by the Brain Armor Foundation in 2017 to research the effects of Brain Armor on brain injury biomarkers in rugby players. Here are the details.

Overall, I was surprised to see the close links between Brain Armor, and similar products like Omax3, and many of the leading researchers on omega-3 and concussion/brain injury.