3rd Gravitational Wave Detection Is About Much More Than Black Holes

More than a year after detecting the first confirmed gravitational waves, researchers were busy at the Laser Interferometer Gravitational-wave Observatory (LIGO) in Livingston, La., upgrading the massive instrument. (LIGO lab)

Our sun was still dim. Waves crashed on martian beaches. Life was emerging on Earth.

That’s when the ghosts of two dead stars — black holes dozens of times more massive than our sun — merged in a far-off corner of the universe. In their final moments, these binary black holes were circling each other hundreds of times per second, as each one spun at 10 times that rate.

The rumbles of distant thunder from that collision reached Earth on Jan. 4 of this year, passing through the detector at the Laser Interferometer Gravitational-Wave Observatory (LIGO) in Hanford, Washington. Then, traveling at the speed of light, this wrinkle in space-time passed through LIGO’s second detector in Livingston, Louisiana, just a fraction of a second later.

The results were published Thursday in the journal Physical Review Letters.

Gravity is the weakest among nature’s four fundamental forces. So only extreme cosmic events like supernovas, neutron stars and merging black holes can make detectable gravitational waves. The waves are so weak that they’d warp the distance between Earth and sun by just the width of a hydrogen atom. But as these waves pass through LIGO’s twin detectors, its enormous lasers can pick up on the truly tiny stretches and squeezes of space-time. You can think of it like a seismometer for measuring mini quakes in the cosmos’ gravitational fabric.

When LIGO gets a hit, the gravitational wave makes a characteristic signal that scientists’ call a “chirp” because of the sound it makes once translated into a format human ears can hear.

This was the third such detection since Albert Einstein first predicted gravitational waves a century ago as part of his general theory of relativity, or theory of gravity. Taken together, these observations form the first samples of a black hole census with far-reaching implications.

Before colliding, the binary black holes spotted earlier this year weighed in at 19 and 31 times our sun’s mass. After merging, the pair created a single black hole 49 times more massive than the sun. Einstein’s equations tell us that energy and mass are interchangeable. And so the missing solar mass worth of energy was radiated out across the universe as gravitational waves.

And with this detection, scientists for the first time think the two black holes might have been spinning in opposite directions. That could reveal clues about the lives of the stars that formed them. It’s possible that the two stars lived in a dense stellar cluster.

This census can also help explain an enduring mystery in astronomy. Scientists have seen supermassive black holes that dominate entire galaxies, as well as small black holes that form after stars die. We even now know about so-called intermediate mass black holes weighing as much as thousands of suns. But how do these all form? Do many small black holes combine intro larger and larger behemoths? LIGO is just starting to piece together this puzzle. 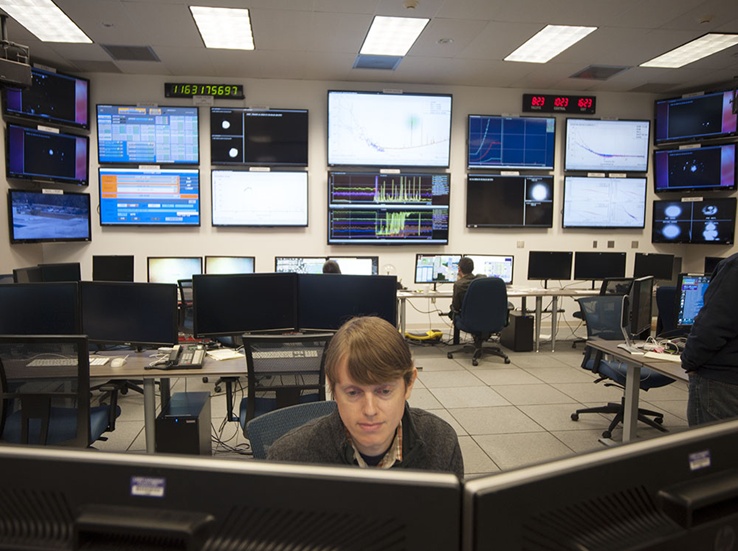 The latest signal took nearly 3 billion light years to reach Earth — twice as far off as the other detections. And because the gravitational wave arrived undiminished, it provides yet another proof of one of Einstein’s theories, showing that gravity travels at light speed.

“LIGO is going to be about a lot more than black holes,” says University of Wisconsin-Milwaukee (UWM) physicist Jolien Creighton, a veteran member of the detection team.

The observatory has forced open a new window on the universe, allowing scientists to hear from distant cosmic reaches — places where conventional telescopes come up empty. LIGO will bring new insights into everything from the heaviest elements on Earth to the nature of gravity itself.

LIGO’s next big breakthrough is expected to come from detecting collisions of binary neutron stars — the corpses of dead stars that pack a sun’s worth of mass into a city-sized sphere. These mergers happen at similar wavelengths to the black hole collisions LIGO’s already seen, and scientists once expected to see neutron stars first.

“This paper only reports on a few weeks worth of data, and we plan to run until August,” says Chad Hanna, a LIGO scientist from Pennsylvania State University. “We might still detect more events.”

So it’s possible that a binary neutron star merger could still be seen this year, or after the LIGO collaboration upgrades its instruments over the coming years. An upgrade over last summer didn’t increase the instrument’s sensitivity quite as much as scientists’ hoped.

“A lot of the elements we see on Earth were not formed in exploding stars but formed in the collision of binary neutron stars,” Creighton says. Humans are mostly made of typical star stuff like carbon and hydrogen, but other earthly elements with high atomic numbers, like gold, are suspected to have come from these more exotic events.

“Most of the gold we see in the solar system might have come from a binary neutron star collision that produced something like a Jupiter mass of gold and dispersed it in all directions,” Creighton says.

LIGO will detect neutron star mergers and send out an alert to the larger astronomy community, telling researchers to all point their telescopes to that region of sky and catch the event. The observations will let scientists test theories under conditions that could never be recreated in a lab. 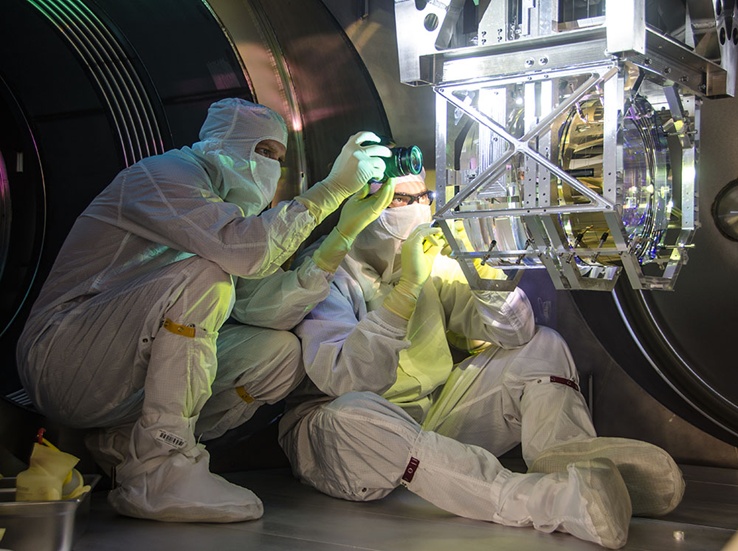 Inside a stainless steel chamber, LIGO technicians examine the surface of one of the test mass mirrors that will reflect infrared laser light to measure the effect of gravity waves. After installation, all air was vacuumed from this chamber. (Mike Fyffe/LIGO lab)

Physicists also hope that more observations from LIGO will reveal new insights into gravity itself, as well as the theorized force-carrying particle called the graviton. It is to gravity what the photon is to light. Like the photon, scientists suspect it too has no mass. And this third LIGO gravitational wave detection helped constrain how big the graviton could possibly be. But new tests are on the horizon as well.

“I think most people would be surprised if general relativity was 100 percent correct, but there’s no evidence that it’s not yet. Einstein created this theory 100 years ago and with no ability to observe gravitational waves, so for him to be 100 percent correct would be quite a feat.”